The Society of Actuaries holds a regular speculative fiction contest. Here’s an excerpt from “The Temple of Screens,” by Nate Worrell, FSA, MAAA, recognized last year for describing the “most innovative actuarial career of the future”:

‘Ever since humans began to be aware of a future, we’ve wanted to explore it. We’ve cast stones, searched in tea leaves, held the entrails of animals in our hands to try to extract some knowledge of our fate. Some of our stories try to show us that like Oedipus, we can’t change our fate. In other stories, we find an escape, we have the power of choice, at least to some degree. But in either case, knowing our future changes how we act. Now that you’ve seen your possible futures, they are tainted. If you were to go back in, they’d all change, reflecting that you had some knowledge. The algorithm would reallocate a new set of weights to your tendencies, increasing some behaviors and decreasing others.’

A wave of anger flashes through me, and I stand and start pacing. ‘So what’s the use of this?’

‘To help you embrace what’s possible, to come to terms with it. You came here because you were afraid of a certain future, one you hoped to avoid somehow. We can’t fight or flee from the future, whatever one we fall into. But we can find serenity in any of our futures, if we so desire.’

MetaFilter has a guide to past contests.

The angle of Earth’s axis varies between 22.1 and 24.5 degrees over a 41,000-year period. This means that the Tropics of Cancer and Capricorn are moving slightly: Each is the most extreme circle of latitude in its hemisphere at which the Sun can be directly overhead. At the moment Cancer is drifting southward and Capricorn northward, each at about 15 meters a year.

In Mexico this movement is reflected precisely in a series of annual markers beside Federal Highway 83, from 2005 to 2010. 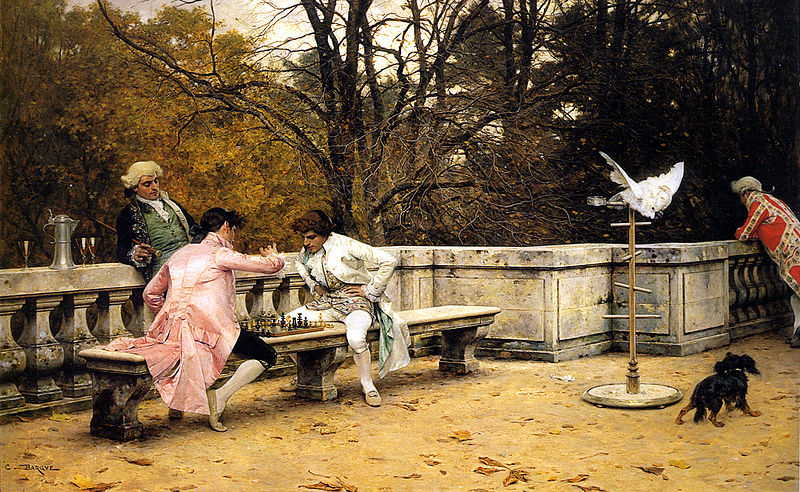 Chess includes a couple of rules intended to keep a game from running on forever. Specifically, a game is a draw (a) if the same position occurs five times or (b) if each player makes a series of 75 moves without a capture or a pawn move. (The more familiar “threefold repetition” and “50-move” rules describe circumstances in which a player can claim a draw but isn’t obliged to.)

At this year’s SIGBOVIK, the tongue-in-cheek scientific conference named after fictional student Harry C. Bovik, Carnegie Mellon’s Tom Murphy VII presented a legal game that carefully skirts these rules to run on as long as possible — 17,697 half-moves, enough to fill 6 pages of the conference proceedings even in small type.

“It can also be downloaded at tom7.org/chess/longest.pgn. Many chess programs fail to load the whole game, but this is because they decided not to implement the full glory of chess.”

09/29/2020 UPDATE: Reader Alexander Bolton has set up a Longest Chess Game Bot on Twitter that’s playing through this game, tweeting out an image of the position after every halfmove. “It tweets every 4 hours so it should be finished in just over 8 years!” 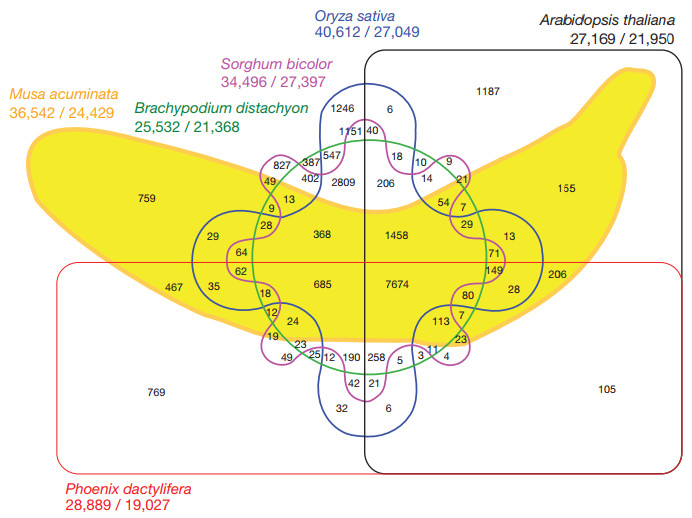 Biologist Jonathan Eisen, who coined the term phylogenomics, called this “perhaps the best genomics Venn diagram ever.” The six-set diagram, published by Angélique D’Hont and her colleagues in Nature in 2012, presents the number of gene families that the banana shares with five other species.

“What the diagram says is that over time the 7,674 gene clusters shared by the six species did not change much in these lineages, as opposed to the 759 clusters specific to the banana (Musa acuminata), for example,” explains Anne Vézina at ProMusa. “Although the genes in these clusters probably share common ancestors with other species, they have since changed to the point that they haven taken on new functions.” 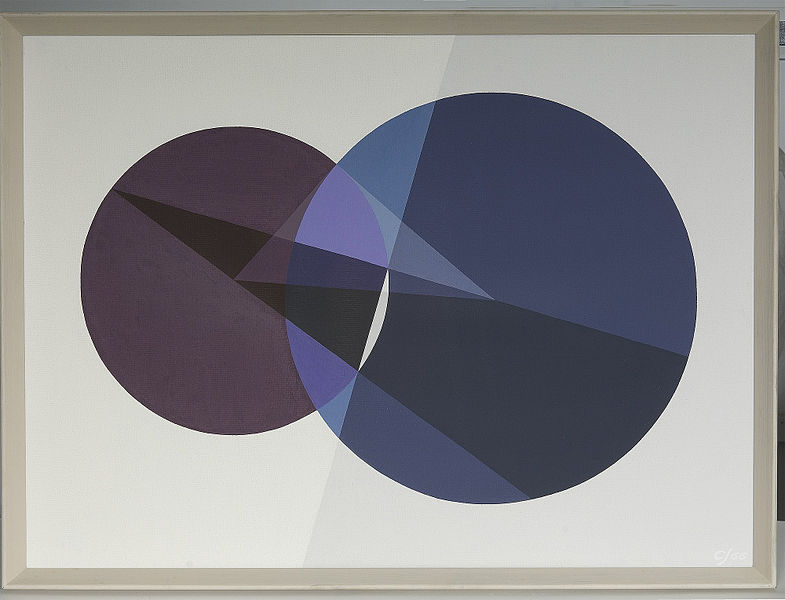 Crockett Johnson, author of the 1955 children’s book Harold and the Purple Crayon, was trained as an engineer and produced more than 100 paintings based on diagrams used in the proofs of classical theorems. This one, Polar Line of a Point and a Circle (Apollonius), appears to have been inspired by a figure in Nathan A. Court’s 1966 College Geometry. The two circles are orthogonal: They cut one another at right angles. And as the square of the line connecting their centers equals the sum of the squares of their radii, these three segments form a right triangle.

Johnson was inspired to this work by his admiration of classical Greek architecture. Sitting in a restaurant in Syracuse in 1973, he managed to construct a heptagon using seven toothpicks and the edges of a menu and a wine list, a construction that had eluded the Greeks. (He found later that Archibald Finlay had illustrated similar constructions in 1959.) 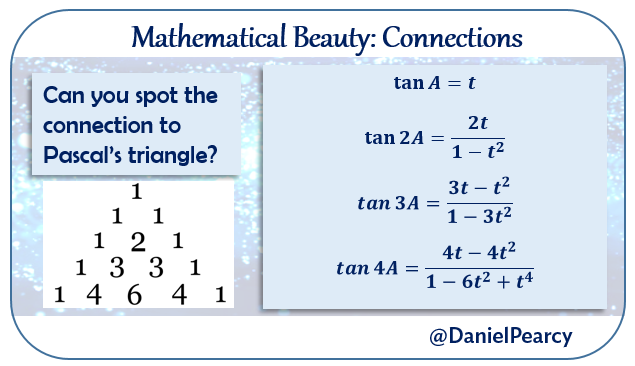 In the 1928 film Steamboat Bill, Jr., a falling facade threatens to flatten Buster Keaton, but he’s spared by the fortunate placement of an open attic window. “As he stood in the studio street waiting for a building to crash on him, he noticed that some of the electricians and extras were praying,” writes Marion Meade in Cut to the Chase, her biography of Keaton. “Afterward, he would call the stunt one of his greatest thrills.”

It’s often said that the falling wall missed Keaton by inches. Is that true? James Metz studied the problem in Mathematics Teacher in 2019. Keaton was 5 feet 5 inches tall; if that the “hinge” of the facade is 5 inches above the surface of the ground, the attic window is 12 feet above that, and the window is 3 feet high, he finds that the top of the window came only within about 1.5 feet of Keaton’s head.

“The window was tall enough to allow an ample margin of safety, so the legend about barely missing his head cannot be true,” Metz writes. “Apparently, Keaton had more headroom than was previously suspected.”

In 1988, Florida International University mathematician T.I. Ramsamujh offered a proof that all positive integers are equal. “The proof is of course fallacious but the error is so nicely hidden that the task of locating it becomes an interesting exercise.”

Now let x and y be any two positive integers. Take n to be the maximum of x and y. Since p(n) is true it follows that x = y.

“We have thus shown that any two positive integers are equal. Where is the error?”

(The error is explained here and here.) 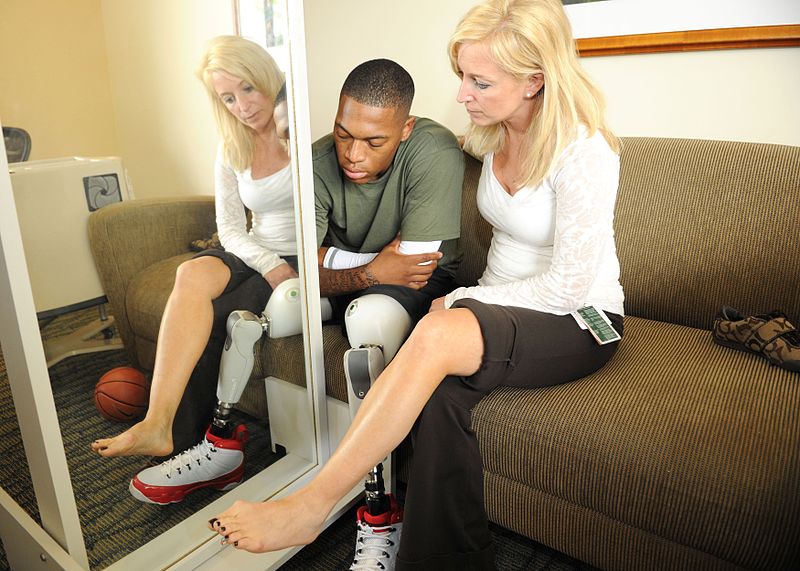 A 2018 review called the technique “a valid, simple, and inexpensive treatment for [phantom-limb pain].”

Discovered by Archimedes: The volume of a cone, sphere, and cylinder of the same height and radius fall in the ratio 1:2:3.

A cone plus a sphere is a cylinder.