appaumé
adj. having the hand opened out so as to display the palm

mammering
n. a state of hesitation or doubt

dactylonomy
n. the art of counting on the fingers

belve
v. to roar or bellow

In 1854 Robert Barnabas Brough wrote a one-act farce that centers on mustaches:

LOUISA. (looking at his moustache rapturously) And yours are such loves! (caressing them)

SOSKINS. (putting his hand up nervously) D—don’t pull ’em about.

LOUISA. (passionately) I wouldn’t injure a hair of them for worlds! — For they are the load-star of my existence!

SOSKINS. (aside) Ahem! (seriously, taking her hand, walking her up and down) Louisa, I fear it is the moustache and not the man you love.

LOUISA. Oh! don’t say that, Anthony — though I own it was they first won me, two months ago, when we met at the Eagle …

In the end she tells the audience, “I charge you, O women, for the love you bear to moustaches, to like this play as an advocate for their growing — and I charge you, O men, for the anxiety you have to grow moustaches … that on the hundredth night I would kiss as many of you as had beards that pleased me, moustaches that liked me, and whiskers that were dyed not.” 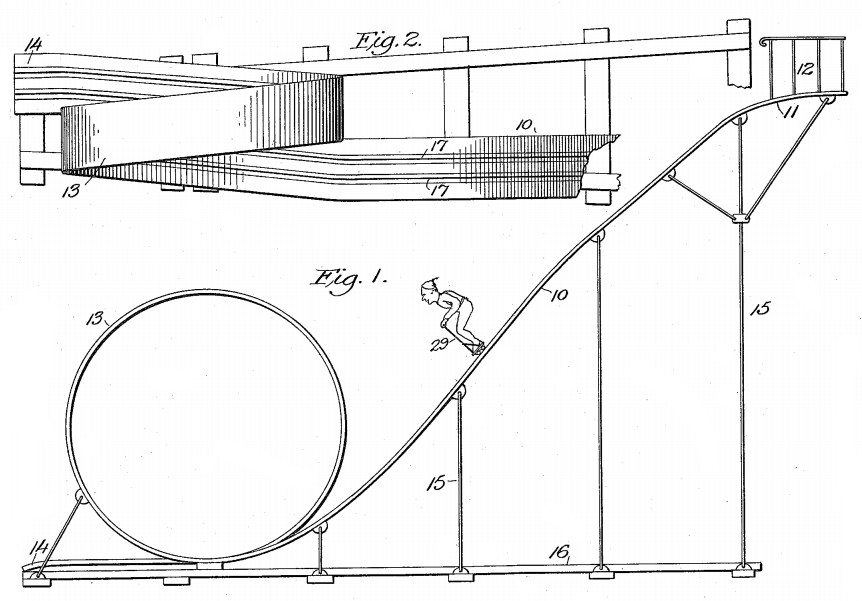 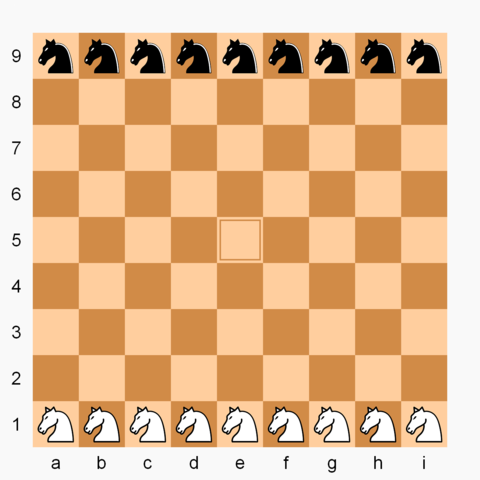 This is beautifully simple: The strategy game Jeson Mor, from Mongolia, is essentially a chess variant played on a 9×9 board. Each player gets nine knights, arranged as shown, and the winner is the first player who can occupy the central square and then leave that square on a subsequent turn. (Alternatively you can win by capturing all the opponent’s pieces.)

That’s it. It sounds straightforward, but with good play it becomes a delicate dance in which each side tries to prepare an attack of his own while compromising his opponent’s, and because the knights are short-range pieces, it tends to create a complex scrimmage in which an unexpected move will win the day.

You can play it online here; here’s a video of two new players trying it out. 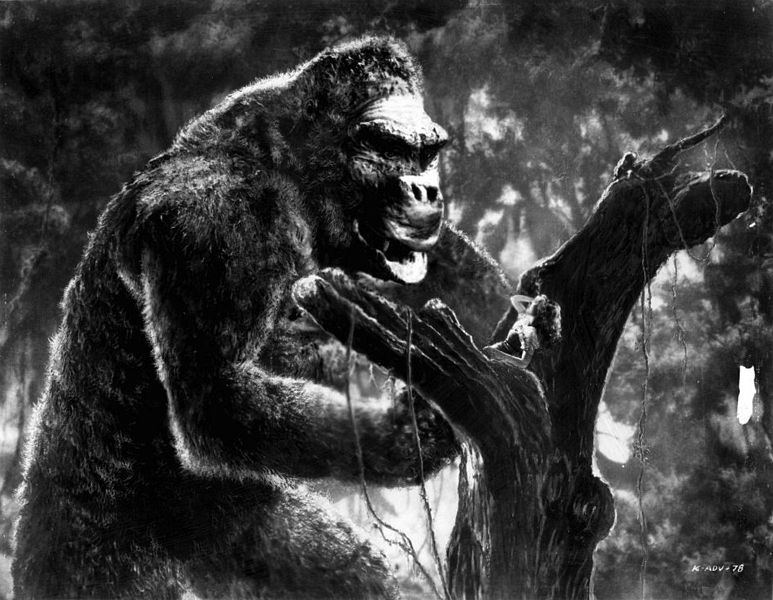 As he was preparing King Kong for his 1933 screen debut, producer Merian C. Cooper was continually dissatisfied with sculptor Marcel Delgado’s sensitive models of the giant ape. “I want Kong to be the fiercest, most brutal, monstrous damned thing that has ever been seen,” he insisted. Animator Willis O’Brien objected that the audience wouldn’t sympathize with a monster that lacked human qualities, but Cooper was adamant: “I’ll have women crying over him before I’m through, and the more brutal he is the more they’ll cry at the end.”

He called the American Museum of Natural History and asked for the exact dimensions of a large male gorilla. On the afternoon of December 22, 1931, he gave O’Brien a telegram from the curator of zoology:

“Now that’s what I want,” he said. O’Brien quit on the spot and walked out of the studio, but after a few drinks together the two returned to work. Eventually they agreed on a compromise. In The Making of King Kong, Orville Goldner writes, “The scene would be repeated several times during the year to come.”

In 1997 researchers rediscovered a 16th-century variant of Japanese chess called taikyoku shōgi, perhaps the largest and most challenging chesslike game ever devised. Played with 804 pieces of 209 types on a board of 1,296 squares, a single game might require a thousand moves played over several long sessions.

“The first difficulty lies in deciphering the minuscule characters identifying a nearly endless crowd of pieces,” write Jean-Louis Cazaux and Rick Knowlton in A World of Chess. “The players must have long arms, tiny fingers, microscopic vision and a huge memory.”

Only two sets of pieces have been restored, and the known rules sets disagree and have yet to be reconciled, but even Wikipedia’s summary of the rules reflects the jaw-dropping complexity of the game.

Born in 1870, George H. Sutton lost both arms below the elbows in a sawmill accident at age 8, but he rose to become one of the foremost billiards players in the nation. In reporting on a Brooklyn tournament in 1903, the New York Times wrote:

Sutton’s handicap in having lost both hands and forearms about three inches below the elbows, gave a novelty to the game, and the ease and rapidity with which he executed the difficult shots was astonishing. His strongest forte seemed to be in the hard massés and draw shots. In all his cue work, Sutton uses no artificial device, and the stick rests either upon the hollow of the left arm at the elbow, the ‘bridge,’ or table rail, the ‘bridge’ being supported by holding the handle on the right knee slightly elevated. The force of propulsion when shooting with one arm comes from the flexible muscles below the elbow joint at the stump of the arm.

He kept this up for 35 years. “Many armless men and women have learned by painstaking practice to make use of their feet for writing, piano-playing, etc.,” marveled Popular Science Monthly in 1918, “but there are probably no parallel instances on record where a man deprived of both arms has become an expert billiard-player by the use of his arm stumps.”

In 1930, he made a run of 3,000 points at straight billiards, which billiards author Robert Byrne calls “one of the most astounding records in any game or sport.” He died of a heart attack at age 68, still on tour.

Gilbert and Sullivan gained fame around the world for their operettas. But where W.S. Gilbert could be impatient and irascible, Arthur Sullivan was full of lively good humor. Vernon Blackburn remembered a curious incident from his travels:

It so happened that I journeyed to Rome almost immediately after my hearing for the first time The Yeomen of the Guard. I was full of its melodies, full of its charm; and one night walking through the Piazza di Spagna, I was whistling the beautiful concerted piece, ‘Strange Adventure,’ whistling it with absolutely no concern and just for the love of the music. A window was suddenly opened and a little face looked out in the moonlight, while a thin voice exclaimed in apparent seriousness: ‘Who’s that whistling my music?’ I looked up with astonishment and with some awe, and told the gentleman that if he were Sir Arthur Sullivan it was his music that I was whistling; and, said I, I thought that the copyright did not extend to Italy. I remember how he convulsed with laughter somewhat to my discomfiture, and closed the window to shut out the chill of the night. I never dared at that period of life to make any call upon one whom I considered to be so far above the possibilities of intercourse.

In his 1908 memoir, baritone Rutland Barrington remembered: “There was invariably enormous competition for seats at the Savoy premieres, and it was difficult to find room for all friends. On one occasion a great personal friend of Sullivan’s, Mr Reuben Sassoon, had applied too late, and backed his application with a piteous appeal to Sullivan for help. He at once said to Carte, ‘If he’ll change the first letter of his name, I’ll give him a seat in the orchestra.'”

A “jobanowl,” or referee, is chosen (preferably a “dull-witted person”), and the two teams toss a sugar beet to decide who flonks first. The jobanowl begins play by shouting, “Here y’go t’gither!”

The flonker stands in the center with the “driveller,” a three-foot hazel pole topped with a dwile, or cloth. While the opposing team joins hands and dances in a circle around the flonker (“girting”), the flonker spins in the opposite direction and, at a chosen moment, flonks the dwile at them. He scores 3 points for a “wanton” (a direct hit on a girter’s head), 2 for a “morther” (a hit to the body), and 1 for a “ripper” (a hit to the leg). 1 point is deducted from either team for each person who remains sober at the end of the game.

If the dwile hits no one (known as a “swadge”), the girters (well, the opponents, who have now ceased girting) pass the dwile from hand to hand chanting “pot pot pot” while the flonker drinks from an ale-filled chamber pot.

The game ends when each team has had a chance at flonking the dwile (an interval known as a “snurd”). During play the jobanowl can choose to change the direction of the girters and can order any player to drink who is judged not to be taking the game seriously enough.

The Lewes Arms sponsors an annual match between its regulars and the thespians of the Lewes Operatic Society. “The rules of the game are impenetrable and the result is always contested.”