Russian artist Anatoly Konenko works on an absurdly, almost unthinkably tiny scale. Trained as an engineer, he took up microminiature art in 1981, inventing his own instruments and techniques. Soon he was writing on grains of rice, poppy seeds, and even a human hair, and in 1994 he began to publish miniature versions of books by Mikhail Koltsov, Yevgeny Yevtushenko, and Alexander Pushkin. His 1996 edition of Chekhov’s Chameleon assembled 29 pages, three color illustrations, and a portrait of the author into a volume 0.9 millimeters square, at the time the smallest book in the world.

In other media, his feats include a 10-milliliter aquarium, a shod flea, a 1:40,000 scale balalaika, and a 17-millimeter chess set with 2-millimeter pieces. Above: a 3.2-millimeter proboscis midge holds a model of the Eiffel Tower. See his website for more — including a caravan of camels passing through the eye of a needle.

Pains and other such sensory processes may be long or short, continuous or intermittent; but in spite of Longfellow’s ‘long, long thoughts’, I do not think a thought (say, that the pack of cards is on the table, or that Geach’s arguments are fallacious) can significantly be called long or short; nor are we obliged to say that in that case every thought must be strictly instantaneous.

… [W]hat I am suggesting is that thoughts have not got all the kinds of time-relations that physical events, and I think also sensory processes, have. One may say that during half an hour by the clock such-and-such a series of thoughts occurred to a man; but I think it is impossible to find a stretch of physical events that would be just simultaneous, or even simultaneous to a good approximation, with one of the thoughts in the series. I think Norman Malcolm was right when he said at a meeting in Oxford that a mental image could be before one’s mind’s eye for just as long as a beetle took to crawl across a table; but I think it would be nonsense to say that I ‘was thinking’ a given thought for the period of the beetle’s crawl — the continous past of ‘think’ has no such use.

The malicious spirit Kuchisake-onna of Japanese folklore wears a mask and carries a sharp object. When you meet her, she asks whether you think she is beautiful. If you answer no, she kills you. If you answer yes, she removes her mask to reveal that the corners of her mouth have been slit open to her ears.

Then she repeats her question. If again you answer no, she kills you. If you answer yes, she cuts your mouth to resemble her own.

Happily, there are at least two ways to escape: describe her appearance as average, or throw hard candies to distract her.

After a national competition in 1938, the hamlet of Monsanto became known as “the most Portuguese village in Portugal.”

That’s an odd epithet, because it’s one of the most distinctive towns in the country — its architecture incorporates enormous boulders from the surrounding landscape. 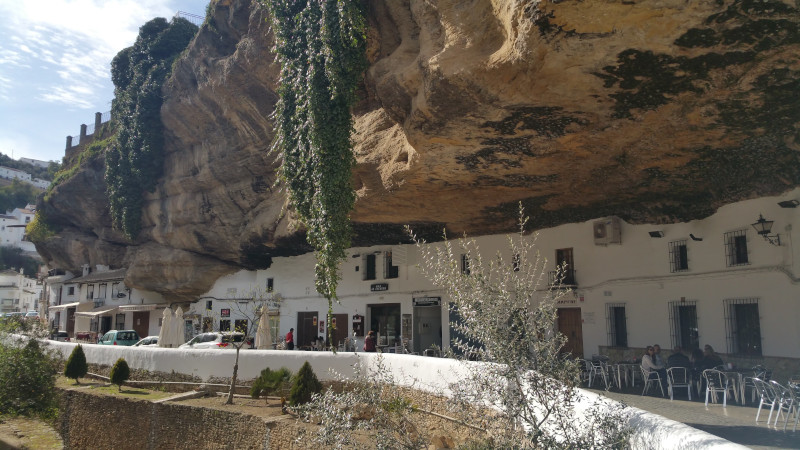 The Spanish town of Setenil de las Bodegas extends along the course of the Rio Trejo.

Some of its buildings are set into the walls of the gorge itself — which can add a startling ceiling to an ordinary street.

New Zealand has a wizard. Born in London in 1932, Ian Channell invented the role at the University of New South Wales when a teaching fellowship ended. “I’ve invented a wizard out of nowhere,” he told CNN. “There were no wizards when I arrived in the world, except in books.”

After a stint as an unpaid “cosmologer, living work of art, and shaman” at Melbourne University, he settled in Christchurch in the 1970s and began speaking on a ladder in Cathedral Square. The city council opposed him at first, but his profile rose. In 1982, the New Zealand Art Gallery Directors Association declared him a living work of art; in 1988 he performed a rain dance in the town of Waimate to break a drought; and in 1990 Prime Minister Mike Moore invited him to become Wizard of New Zealand (“No doubt there will be implications in the area of spells, blessings, curses, and other supernatural matters that are beyond the competence of mere Prime Ministers”).

In 1998 the Christchurch City Council engaged him to “provide acts of wizardry and other wizard-like-services as part of promotional work for the city of Christchurch” for 16,000 New Zealand dollars a year. He helps to promote local events and tourism and welcome dignitaries and delegations to the city. In 2009 he received the Queen’s Service Medal, one of the country’s highest honors (“I couldn’t believe it, I thought it would never happen”).

Now 88 years old, Channell is cultivating an apprentice, Ari Freeman, who may take over when he steps down. “I want the wizard phenomenon to continue,” Freeman said, “and I will totally fulfill that role.”

On April 6, 1966, to celebrate 100 years of the city’s incorporation, 35 citizens of Geneva, Ohio, signed a “Declaration of Lunar Ownership”:

When in the course of human events and space-age accomplishments, the destiny of mankind becomes influenced … [by] the presence of a particular controversial Celestial Body unclaimed and unregulated … it should be advisable and honorable … to lay definitive and prior claim to the entire physical mass and any and all aura, aspect, imaginative or otherwise, of … the Moon.

Geneva assumed “full possession and complete responsibility” of the Moon, yielding “to no man or State in its sovereign right so to do.” The declaration asserted the city’s claim as “positive, supreme, permanent and sovereign,” transcending and voiding “all other claims both real and fancied … previously made for the possession of all or any part of the Moon.” It permitted all humans “to enjoy and to behold and bask” in moonlight but disclaimed responsibility for “any mental, physical, or spiritual influences … [or] for any advantages or disadvantages from tidal phenomena.” Space explorers would be charged per hour for “landings and close fly bys of the visible acreage of the Moon,” and any activities on the far side required “the express consent of the official Councils of the City of Geneva.” And the declaration provided for the sale, rent, or lease of the visible lunar face “to desirable applicants upon a two-thirds vote of the entire population of Geneva,” granting the United States government “prior option to this privilege.”

For the year 1966, the document allowed the sale of 100 deeds “for the sum of $100 describing 100 acres from Mare Imbrium”; “the possessor of this deed shall have it to hold, his heirs and assigns forever and unencumbered.” Whether any were sold I can’t tell.

(From Virgiliu Pop, Who Owns the Moon?: Extraterrestrial Aspects of Land and Mineral Resources Ownership, 2008.)

In 2009, in the little Swiss town of Teufen, conceptual artists Frank and Patrik Riklin converted a 1980s-era nuclear fallout shelter to the “Null Stern Hotel,” an underground facility that accommodates 14 guests in a concrete bunker fitted with blast doors nearly two feet thick.

“We kept the internal structure of the shelter intact — the concrete and the ductwork — and then we added the warmth of antique beds and furniture,” Patrik told the Guardian. “For us it’s an art installation before it’s a hotel — a place where people can think about their surroundings.” There are no windows, only a CCTV camera displaying the outside world, and they retained the institutional paint scheme of pastel blue and yellow.

The site was nominated for best innovation of the year in the 2009 Worldwide Hospitality Awards, and GEO magazine ranked it among the Top 100 hotels in Europe the following year. In 2010 the proprietors were seeking to expand the franchise, but to date no hotel has opened beyond Teufen.