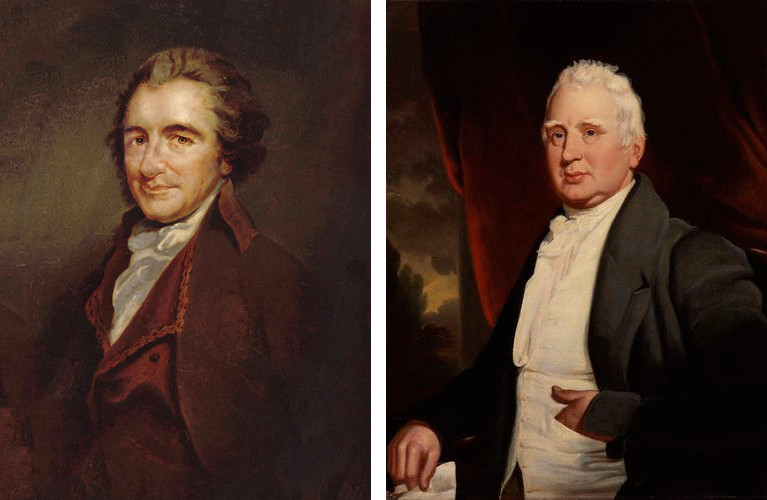 Thomas Paine came to an ignominious end. The revolutionary activist so inspired English journalist William Cobbett that Cobbett dug up his bones in 1819 and transported them back to England, hoping to give Paine a heroic reburial in the land of his birth. (G.K. Chesterton wrote, “I wonder what he said when asked if he had anything to declare?”)

But Cobbett never got around to it. When he himself died in 1835, Paine’s bones were still among his effects, and they’ve since been lost: His skull may be in Australia, his jawbone may be in Brighton, or maybe Cobbett’s son buried everything in the family plot when he couldn’t auction it off. In 1905 part of his brain (“resembling hard putty”) may have been buried under a monument in New Rochelle, N.Y. But no one knows for sure. 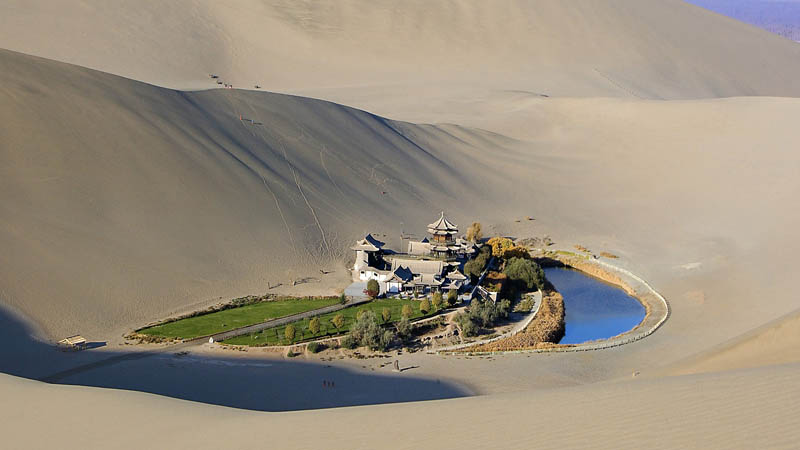 Six kilometers south of Dunhuang in western China lies Crescent Lake, an oasis that once served as a waypoint to the West along the Silk Road. British missionaries Mildred Cable and Francesca French recorded their first sight of it during their travels through the Gobi Desert in the 1920s:

All around us we saw tier on tier of lofty sand-hills, giving the lie to our quest, yet when, with a final desperate effort, we hoisted ourselves over the last ridge and looked down on what lay beyond, we saw the lake below, and its beauty was entrancing.

The lake survived for 2,000 years thanks to its low altitude and sheltered position, but it began to shrink in the 20th century due to population pressures — its depth dropped from 7.5 to 0.9 meters between 1960 and the early 1990s. In 2006 the government stepped in to reverse the decline, and now it’s growing again.

Podcast Episode 154: Spared by a Volcano

The worst volcanic disaster of the 20th century struck Martinique in 1902, killing 30,000 people in the scenic town of Saint-Pierre. But rescuers found one man alive — a 27-year-old laborer in a dungeon-like jail cell. In this week’s episode of the Futility Closet podcast we’ll meet Ludger Sylbaris, who P.T. Barnum called “The Only Living Object That Survived in the Silent City of Death.”

We’ll also address some Indian uncles and puzzle over a gruesome hike.

END_OF_DOCUMENT_TOKEN_TO_BE_REPLACED 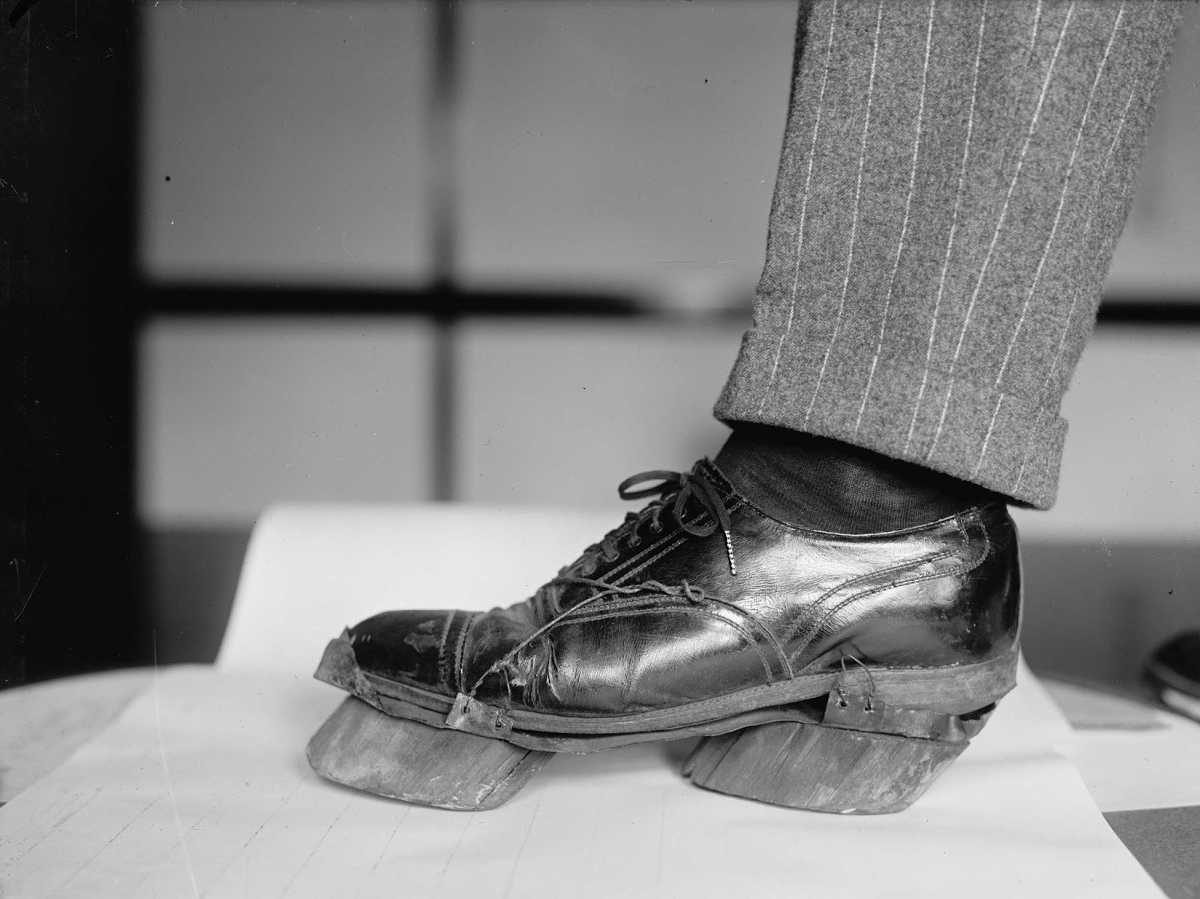 This is clever — during Prohibition, moonshiners wore shoes that left hoofprints. From the St. Petersburg, Fla., Evening Independent, May 27, 1922:

A new method of evading prohibition agents was revealed here today by A.L. Allen, state prohibition enforcement director, who displayed what he called a ‘cow shoe’ as the latest thing from the haunts of moonshiners.

The cow shoe is a strip of metal to which is tacked a wooden block carved to resemble the hoof of a cow, which may be strapped to the human foot. A man shod with a pair of them would leave a trail resembling that of a cow.

“The shoe found was picked up near Port Tampa where a still was located some time ago. It will be sent to the prohibition department at Washington. Officers believe the inventor got his idea from a Sherlock Holmes story in which the villain shod his horse with shoes the imprint of which resembled those of a cow’s hoof.”

A curious chain of limestone shoals extends between India and Sri Lanka, possibly the remains of a land connection between the two. The sea between the two landmasses is called Sethusamudram (“Sea of the Bridge”), and early British maps refer to it as Adam’s Bridge. How and when the structure evolved are still sources of controversy among geologists, but historical records suggest that it was passable on foot until a cyclone deepened the channel in the 1400s.

Appealing to NASA satellite images, some sources contend that the bridge was created by Rama to rescue his kidnapped wife Sita, as described in Hindu theology, perhaps with the aid of a human army. NASA delicately observes that this interpretation “is certainly not ours. … Remote sensing images or photographs from orbit cannot provide direct information about the origin or age of a chain of islands, and certainly, cannot determine whether humans were involved in producing any of the patterns seen.”

“The Elephant Who Walked to Manchester”

In 1872, as he prepared to retire in Edinburgh, English menagerie owner Alexander Fairgrieve auctioned off his remaining attractions in the Waverley Market. The largest lot was Maharajah, an Indian elephant 7 feet tall with 20-inch tusks. The winning bid, £680, came from James Jennison, proprietor of the Belle Vue Gardens near Manchester, who was expanding his zoological collection. The elephant rebelled at entering a horse box on the Northern British Railway, so his keeper, Lorenzo “Lion Tamer” Lawrence, simply walked his charge to Manchester.

The unlikely pair covered 200 miles in 10 days, arriving on April 20, and the celebrated animal, “having travelled by road from Scotland, via Carlisle, Kendal, Lancaster, Preston and Bolton,” was installed in a temporary glass-roofed elephant house. In the ensuing years he would walk among the visitors, ridden by thousands of children and starring in spectacles such as “Napoleon Crossing the Alps” in the city’s May Day and Whit parades. He died of pneumonia in 1882 at the age of 18.

Heywood Hardy’s 1875 painting A Disputed Toll, above, records an event that probably never happened — it’s said that during their journey, while Lawrence was arguing with a parsimonious gatekeeper, Maharajah simply lifted the gate from its hinges. Accurate or not, the memorable painting now hangs in the Manchester Art Gallery. 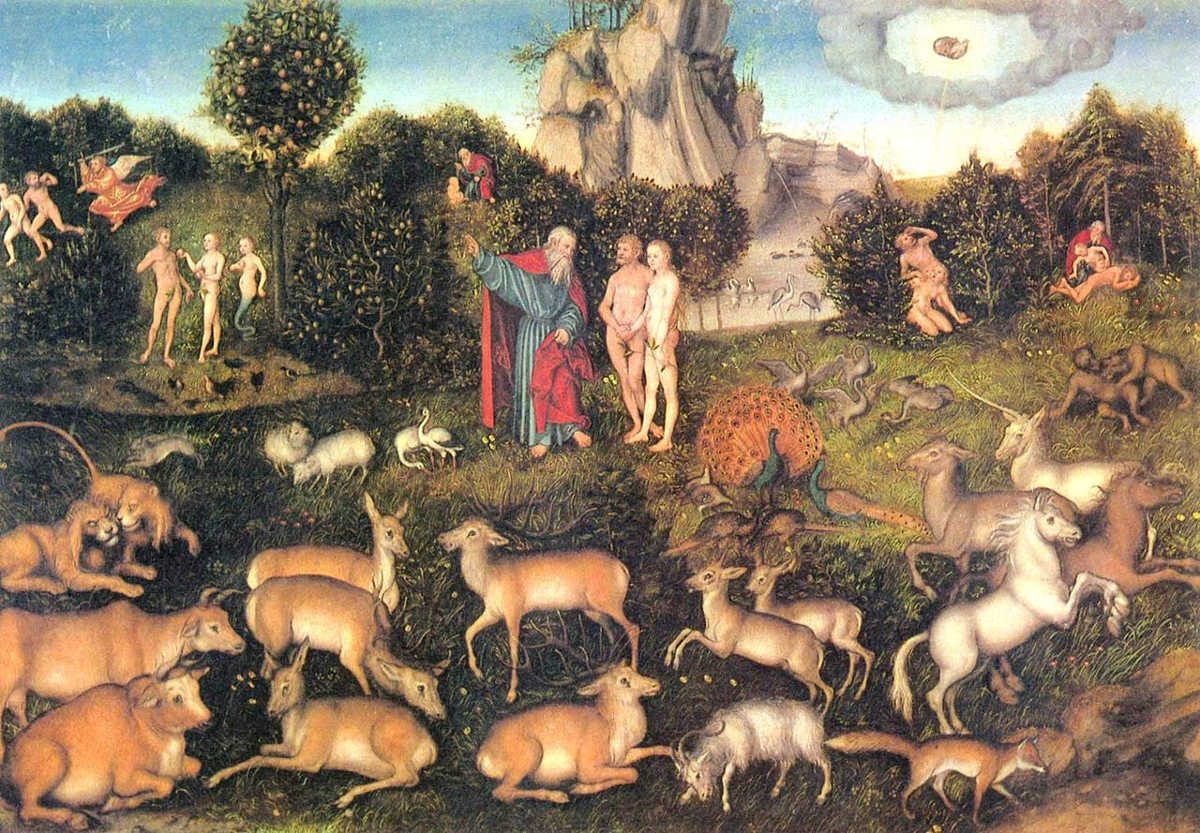 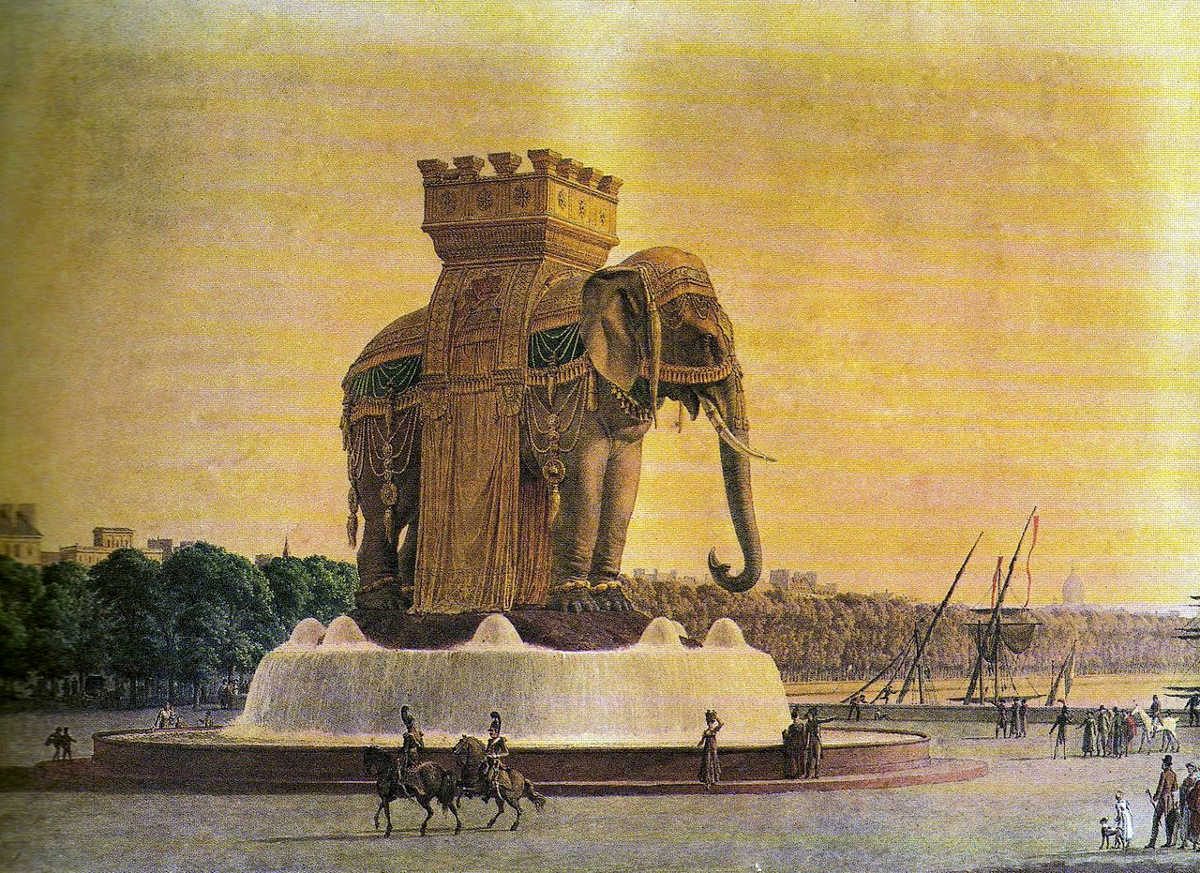 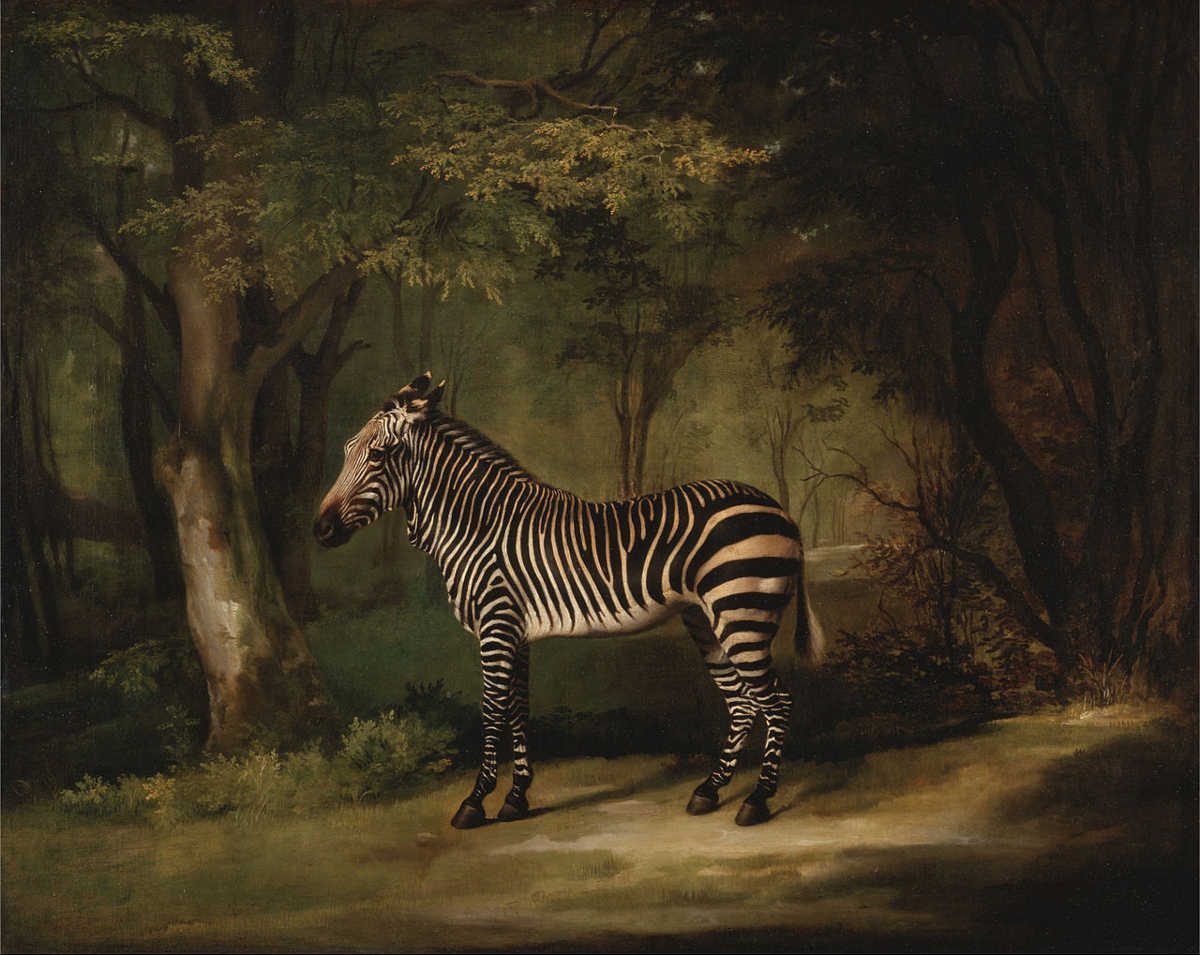 French artist François Abélanet creates anamorphic landscape illusions. “With my creations, I transform fiction into reality,” he writes. “Where there’s a garden, a plaza, a courtyard, or a confined space, I see a playing field where everyone is invited to participate, to play with nature. Indeed, I like the idea that nature lives its own life and becomes its own creation.”