In 1963, French geologist Michel Siffre descended into a glaciated cavern under the French-Italian Maritime Alps and spent more than two months without sun to “investigate time, that most inapprehensible and irreversible thing.” He could telephone scientists on the surface, who recorded the time of each call, but they never told him the time or date. From his diary:

Forty-second awakening. … I really seem to have no least idea of the passage of time. This morning, as an example, after telephoning to the surface and talking for a while, I wondered afterward how long the telephone conversation had lasted, and could not even hazard a guess. … Fifty-second awakening. … I am losing all notion of time. … When, for instance, I telephone the surface and indicate what time I think it is, thinking that only an hour has elapsed between my waking up and eating breakfast, it may well be that four or five hours have elapsed. And here is something hard to explain: the main thing, I believe, is the idea of time that I have at the very moment of telephoning. If I called an hour earlier, I would still have stated the same figure. … I am having great difficulty to recall what I have done today. It costs me a real intellectual effort to recall such things.

The outsiders could see that his waking and sleeping remained near a cycle of 24.5 hours, but Siffre’s conscious understanding of time was greatly affected. Misunderstanding the length of his day, he began to husband his rations, thinking he had weeks more to endure. At his 57th awakening, the final day of the experiment, he thought it was August 20; in fact it was September 14. “I underestimated by almost half the length of my working or waking hours; a ‘day’ that I estimated at seven hours actually lasted on the average fourteen hours and forty minutes.” NASA has pursued these inquiries to consider the implications for space travelers.

A bizarre detail from Thomas Southcliffe Ashton and Joseph Sykes’ 1964 book The Coal Industry of the Eighteenth Century:

British miners often had to work in near-total darkness, as any flame might ignite methane gas.

So, in the more explosion-prone mines, “colliers sometimes tried to carry on their work by the feeble light of phosophorous and putrescent fish.”

The Paradox of the Question

An angel appears to a conference of philosophers and offers to provide the truthful answer to a single question. Cannily they ask:

“What is the ordered pair whose first member is the question that would be the best one for us to ask you, and whose second member is the answer to that question?”

“It is the ordered pair whose first member is the question you just asked me, and whose second member is this answer I am giving you.”

Philosopher Ned Markosian writes, “At the time the philosophers asked [the question above], it seemed like that question was the ideal one for their peculiar situation. But as it turned out, [that question] was obviously not at all the right thing to ask. … The puzzle, then, is this: What went wrong?”

In September 2008, Mike Nolan, head of web services at Edge Hill University in Ormskirk, England, noticed something strange on Google Maps. “I grew up in the area and spotted on the map one day that it said ‘Argleton’,” he told the Guardian. “But it’s just a farmer’s field close to the village hall and playing fields. I think a footpath goes across the field, but that’s all.”

Bloggers began to discuss the nonexistent town, which found its way into other services that used Google’s data: Employment agencies, weather services, and letting agents began to cite Argleton in their listings, reassigning real people and businesses to the phantom settlement because of its claimed location.

Was it a joke? A placeholder? A misspelling? Whatever it was, it had disappeared again by May 2010. Google would say only that it experiences “occasional errors” and that it gets its mapping information from a Dutch company called Tele Atlas (whose spokesperson would add only, “I really can’t explain why these anomalies get into our database”).

Danny Dorling, president of the Society of Cartographers, said, “I would bet that this is an innocent mistake. In other words, it was not intentionally inserted to catch out anyone infringing the map’s copyright, as some are saying. But the bottom line is that we don’t know what mapping companies do to protect their maps or to hide secret locations, as some are obligated to do.”

In 1829, engineer J.W. Hoar built a cable railway up the side of Ladder Hill in Jamestown, Saint Helena, in the South Atlantic, to carry cargo up the 40-degree incline to Ladder Hill Fort. After 40 years, termite damage forced the closure of the railway, but the associated staircase remains open to intrepid tourists.

The fastest recorded ascent to date was made by Scotland’s Graham Doig in 2013. He climbed the 699 steps in 5 minutes 16.78 seconds.

In the 1940s, arborsculptor Axel Erlandson planted six sycamore trees in a circle and grafted them as they grew to form a “woven” unit with diamond interstices.

When Sarah Davis of Hiawatha, Kansas, died in 1930, her husband John spent most of his wealth on her grave, including 11 life-size statues of Italian marble consorting under a canopy that weighs 50 tons.

The extravagance won John some criticism during the Depression, but today the monument brings a steady flow of tourists to the town. 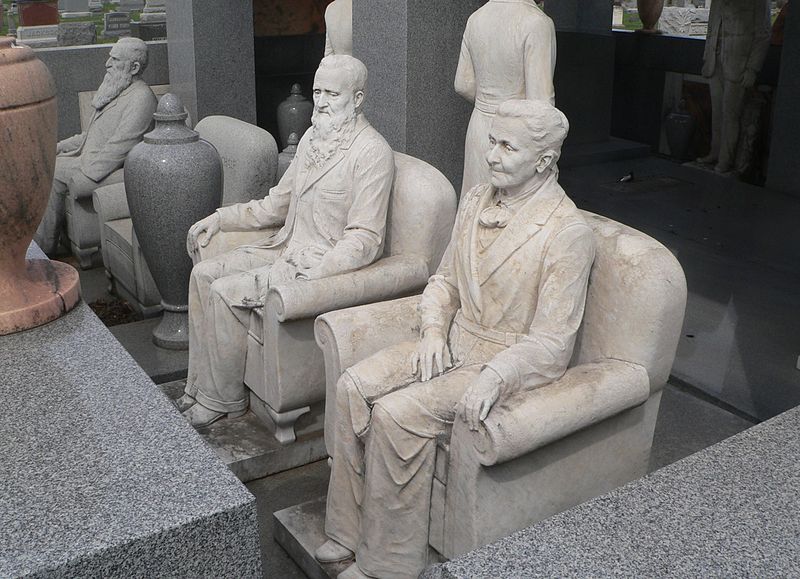