The decimal expansion of 1/7 is 0.142857142857 …, a repeating decimal. Arrange the six repeating digits into overlapping ordered pairs, like so:

and, remarkably, all six lie on an ellipse: Even more remarkably, if we take the digits two at a time:

these points also lie on an ellipse: That’s from David Wells, The Penguin Dictionary of Curious and Interesting Numbers (1986). Victor Hugo wrote, “Mankind is not a circle with a single center but an ellipse with two focal points, of which facts are one and ideas the other.”

The Fibonacci numbers are the ones in this sequence:

Each number is the sum of the two that precede it. But now, interestingly: 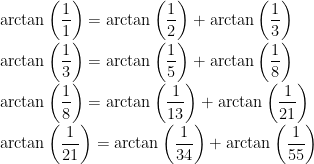 “Stopping by Euclid’s Proof of the Infinitude of Primes,” by Presbyterian College mathematician Brian D. Beasley, “with apologies to Robert Frost”:

Whose proof this is I think I know.
I can’t improve upon it, though;
You will not see me trying here
To offer up a better show.

His demonstration is quite clear:
For contradiction, take the mere
n primes (no more), then multiply;
Add one to that … the end is near.

In vain one seeks a prime to try
To split this number — thus, a lie!
The first assumption was a leap;
Instead, the primes will reach the sky. I hand you an ordinary deck of 52 cards. You inspect and shuffle it, then choose five cards from the deck and hand them to my assistant. She looks at them and passes four of them to me. I name the fifth card.

At first this appears impossible. The hidden card is one of 48 possibilities, and by passing me four cards in some order my assistant can have sent me only 1 of 4! = 24 messages. How am I able to name the card?

Part of the secret is that my assistant gets to choose which card to withhold. The group of five cards that you’ve chosen must contain two cards of the same suit. My assistant chooses one of these to be the hidden card and passes me the other one. Now I know the suit of the hidden card, and there are 12 possibilities as to its rank. But my assistant can pass me only three more cards, with 3! = 6 possible messages, so the task still appears impossible.

The rest of the secret lies in my assistant’s choice as to which of the two same-suit cards to give me. Think of the 13 card ranks arranged in a circle (with A=1, J=11, Q=12, and K=13). Given two ranks, it’s always possible to get from one to the other in at most 6 steps by traveling “the short way” around the circle. So we agree on a convention beforehand: We’ll imagine that the ranks increase in value A-K, and the suits as in bridge (or alphabetical) order, clubs-diamonds-hearts-spades. This puts the whole deck into a specified order, and my assistant can pass me the three remaining cards in one of six ways:

So if my assistant knows that I’ll always travel clockwise around the imaginary circle, she can choose the first card to establish the suit of the hidden card and to specify one point on the circle, and then order the remaining three cards to tell me how many clockwise steps to take from that point to reach the hidden rank.

“If you haven’t seen this trick before, the effect really is remarkable; reading it in print does not do it justice,” writes mathematician Michael Kleber. “I am forever indebted to a graduate student in one audience who blurted out ‘No way!’ just before I named the hidden card.”

It first appeared in print in Wallace Lee’s 1950 book Math Miracles. Lee attributes it to William Fitch Cheney, a San Francisco magician and the holder of the first math Ph.D. ever awarded by MIT.

In introducing the puzzle-loving logician Raymond Smullyan, the chairman of a meeting praised him as unique.

“I’m sorry to interrupt you, sir,” said Smullyan, “but I happen to be the only one in the entire universe who is not unique.” In short, if all the matter in the universe except the nematodes were swept away, our world would still be dimly recognizable, and if, as disembodied spirits, we could then investigate it, we should find its mountains, hills, vales, rivers, lakes, and oceans represented by a film of nematodes. The location of towns would be decipherable, since for every massing of human beings there would be a corresponding massing of certain nematodes. Trees would still stand in ghostly rows representing our streets and highways. The location of the various plants and animals would still be decipherable, and, had we sufficient knowledge, in many cases even their species could be determined by an examination of their erstwhile nematode parasites. Four straight roads cross a plain. No two are parallel, and no three meet in a point. On each road is a traveler who moves at some constant speed. If Blue and Red meet each other at their crossroad, and each of them meets Yellow and Green at their respective crossroads, will Yellow and Green necessarily meet at their own crossroad?

Suprisingly, the answer is yes. Rob Fatland offers a beautiful solution at the CTK Exchange:

Imagine the whole scenario unfolding from Blue’s rest frame; that is, regard Blue as unmoving and consider the movements of the other travelers relative to him. What does he see? Objectively we know that each traveler moves along a straight line at a constant speed, eventually encounters Blue, and moves on, so from Blue’s perspective each of them moves directly toward him on a straight line, passes through his position, and continues.

(It might be objected that two points traveling the same line needn’t meet if they’re going in the same direction at the same speed. But here this would mean that two of the roads are parallel, and that possibility is excluded by the conditions of the problem.)