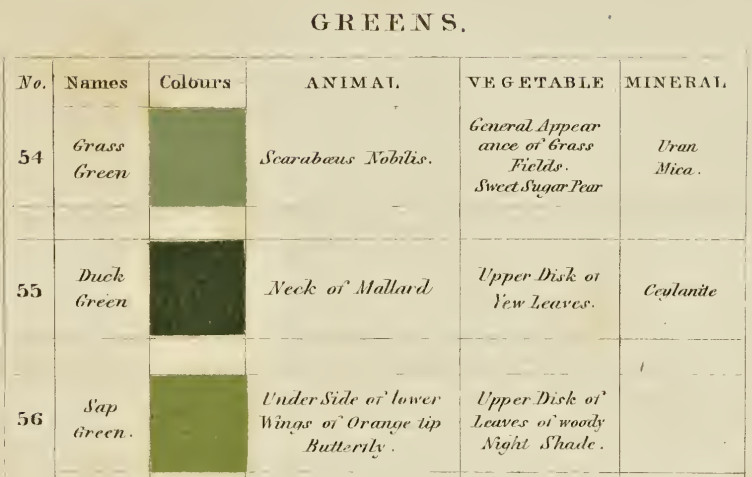 Today it’s possible to describe a color quantitatively, but how did people make such fine distinctions in the 18th century? German geologist Abraham Gottlob Werner proposed a solution in 1774: His Von den äußerlichen Kennzeichen der Foßilien included a “color dictionary” that located each hue in the natural world. Updated by Scottish painter Patrick Syme, it describes 110 colors, telling where each might be found in animal, vegetable, and mineral form: Number 35, for example, “bluish lilac purple,” is the shade of the male of the dragonfly Libellula depressa, the blue lilac, and the mineral lepidolite. Number 82, “tile red,” may be found in the breast of the cock bullfinch, in the shrubby pimpernel, and in porcelain jasper.

This common language gave naturalists an objective way to communicate what they were seeing. Off Brazil aboard the H.M.S. Beagle in 1832, Charles Darwin wrote, “I had been struck by the beautiful color of the sea when seen through the chinks of a straw hat. It was according to Werner nomenclature ‘Indigo with a little azure blue’. The sky at the time was ‘Berlin [blue] with little Ultra marine’.”