This is charming — in his 1962 textbook Experimentation and Measurement, statistician William J. Youden ends his chapter on “Typical Collections of Measurements” with this:

Your author has a small printing press for a hobby. He set in type his opinion of the importance of the normal law of error.

They searched for mentions of “Comet ISON,” a sun-grazing comet discovered in September 2012, and for “Pope Francis,” whose papacy began in March 2013 and who is the first of his name. Both of these subjects are historically momentous enough that they might be known even to people in the far future; if those people travel into our past, then they might mention them inadvertently in, say, 2011, before we could plausibly have done so ourselves.

“Given the current prevalence of the Internet … this search might be considered the most sensitive and comprehensive search yet for time travel from the future,” they reported, acknowledging that “technically, what was searched for here was not physical time travellers themselves, but rather informational traces left by them.”

And they note that our failure to detect travelers doesn’t mean they’re not there. “First, it may be physically impossible for time travellers to leave any lasting remnants of their stay in the past, including even non-corporeal informational remnants on the Internet. Next, it may be physically impossible for us to find such information as that would violate some yet-unknown law of physics. … Furthermore, time travellers may not want to be found, and may be good at covering their tracks.”

See Regrets and The Telltale Mart. 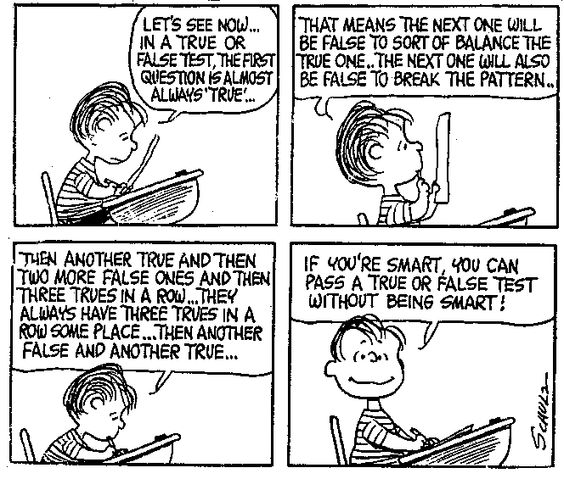 In 1978, inspired by this Peanuts cartoon, Nathaniel Hellerstein invented the Linus sequence, a sequence of 1s and 2s in which each new entry is chosen the prevent the longest possible pattern from emerging at the end of the line. Start with 1:

Now if the second digit were also a 1 then we’d have a repeating pattern. So enter a 2:

If we choose 2 for the third entry we’ll have “2 2” at the end of the line, another emerging pattern. Prevent that by choosing 1:

But now the 1s at the end are looking rather pleased with themselves, so choose 2:

Admittedly, this isn’t exactly the sequence that Linus was describing in the comic strip, but it opens up a world of its own with many surprising properties (PDF), as these things tend to do.

It’s possible to compile a related sequence by making note of the length of each repetition that you avoided in the Linus sequence. That’s called the Sally sequence.

In February 1966, the Soviet Union’s Luna 9 landed safely on the moon and became the first spacecraft to transmit photographs of the moon seen from surface level.

The Soviets didn’t release the photos immediately, but scientists at England’s Jodrell Bank Observatory, who were observing the mission, realized that the signal format was the same as the Radiofax system that newspapers used to transmit pictures. So they just borrowed a receiver from the Daily Express, decoded the images, and published them.

The BBC observes, “It is thought that Russian scientists had deliberately fitted the probe with the standard television equipment, either to ensure that they would get the higher-quality pictures from Jodrell Bank without having the political embarrassment of asking for them, or to prevent the Soviet authorities from making political capital out of the achievement.” 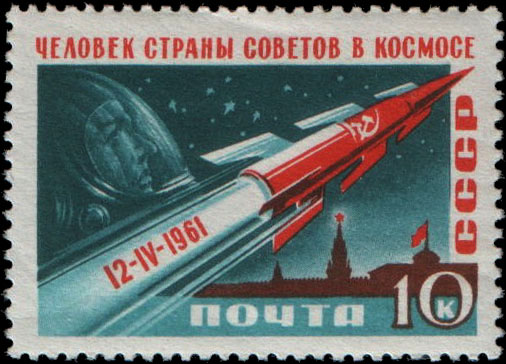 In 1982, J.K. Aronson of Oxford, England, sent this mysterious fragment to Douglas Hofstadter:

The context of their discussion was self-reference, so presumably the intended conclusion of Aronson’s sentence was … letter in this sentence. If one ignores spaces and punctuation, then T does indeed occupy those positions in Aronson’s fragment; the next few terms would be 35, 39, 45, 47, 51, 56, 58, 62, and 64. The Online Encyclopedia of Integer Sequences gives a picture:

But there’s a catch: In English, most ordinal adjectives (FIRST, FOURTH, etc.) themselves contain at least one T, so the sentence continually creates more work for itself even as it lists the locations of its Ts. There are a few T-less ordinals (NINE BILLION ONE MILLION SECOND), but these don’t arrange themselves to mop up all the incoming Ts. This means that the sentence must be infinitely long.

And, strangely, that throws our initial presumption into confusion. We had supposed that the sentence would end with … letter in this sentence. But an infinite sentence has no end — so it’s not clear whether we ought to be counting Ts at all!

Suppose k runners are running around a circular track that’s 1 unit long. All the runners start at the same point, but they run at different speeds. A runner is said to be “lonely” if he’s at least distance 1/k along the track from every other runner. The lonely runner conjecture states that each of the runners will be lonely at some point.

This is obviously true for low values of k. If there’s a single runner, then he’s lonely before he even leaves the starting line. And if there are two runners, at some point they’ll occupy diametrically opposite points on the track, at which point both will be lonely.

But whether it’s always true, for any number of runners, remains an unsolved problem in mathematics.

Write down an integer. Remove any zeros and sort the digits in increasing order. Now add this number to its reversal to produce a new number, and perform the same operations on that:

Princeton mathematician John Horton Conway calls this the RATS sequence (for “reverse, add, then sort”) and in 1989 conjectured that no matter what number you start with (in base 10), you’ll either enter the divergent pattern above or find yourself in some cycle. For example, starting with 3 gives:

… and now we’re in a loop — the last eight terms will just repeat forever.

Conway’s colleague at Princeton, Curt McMullen, showed that the conjecture is true for all numbers less than a hundred million, and himself conjectured that every RATS sequence in bases smaller than 10 is eventually periodic. Are they right? So far neither conjecture has been disproved.

On May 20, 2005, to convey its size, Italian artist Gianni Motti walked the length of the nascent Large Hadron Collider, followed by a cameraman.

At an average speed of 5 kph, it took him 5 hours 50 minutes to walk all 27 kilometers of the underground ring. Today a proton covers the same distance 11,000 times in 1 second.

Motti dubbed his effort “Higgs: In Search of Anti-Motti.” I don’t think he found it.

In the July/August 2006 issue of MIT Technology Review, Richard Hess noted that this expression:

provides a good approximation to π using each of the digits 1-9 once. He challenged readers to do better, limiting themselves to the operators +, -, ×, ÷, exponents, decimal points, and parentheses.

The best solution received was from Joel Karnofsky:

But Karnofsky noted that this is probably not the best possible. “Unfortunately, my estimate is that there are on the order of 1016 unique values that can be generated under the given conditions and I cannot see how to avoid checking essentially all of them to fnd a guaranteed best. With maybe a thousand computers I think this could be done in my lifetime.”

Indeed, eight months later Sergey Ioffe sent this solution, which he found “using a genetic-like algorithm applying mutations to a population of parse trees and keeping some number of best ones”:

Even that has now been surpassed — on the Contest Center’s ongoing pi approximation page, Oleg Vlasii offers this expression:

And it’s possible to do even better than this if zero is added as a tenth digit.

03/25/2017 UPDATE: Reader Danesh Forouhari wondered whether there’s a “unidigital” formula for pi. There is — Viète’s formula: