Designed by German architect Ole Scheeren, Singapore’s Interlace apartment complex was named 2015 World Building of the Year for its innovative form, which resembles 31 conventional buildings stacked atop one another, like Jenga blocks. Each block comprises six stories, but they’re stacked four high, so there’s a maximum of 24 floors, and nearly every unit has an excellent view. Viewed from above they form eight hexagons, each with a swimming pool, and the stacking ensures that light and air can flow among the blocks.

In Architecture Review, Laura Raskin wrote, “Architect Ole Scheeren hypothesized that dense urban residential living didn’t have to occur in an isolating skyscraper — and he was right.”

Elisabeth Mann Borgese taught her dog to type. In her book The Language Barrier she explains that her English setter, Arli, developed a vocabulary of 60 words and 17 letters, though “He isn’t an especially bright dog.” “[Arli] could write under dictation short words, three-letter words, four-letter words, two-letter words: ‘good dog; go; bad.’ And he would type it out. There were more letters but I never got him to use more than 17.”

She began in October 1962 by training all four of her dogs to distinguish 18 designs printed on saucers; Arli showed the most promise, so she focused on him. By January 1963 he could count to 4 and distinguish CAT from DOG. Eventually she gave him a modified typewriter with enlarged keys, which she taught him to nose mechanically by rewarding him with hamburger. “No meaning at all was associated with the words,” she writes, though he did seem to associate meaning with words that excited him. “When asked, ‘Arli, where do you want to go?’ he will unfailingly write CAR, except that his excitement is such that the ‘dance’ around the word becomes a real ‘stammering’ on the typewriter. ACCACCAAARR he will write. GGOGO CAARR.”

(And it’s always tempting to discover meaning where there is none. Once while suffering intestinal problems after a long flight Arli ignored his work when she tried to get him to type GOOD DOG GET BONE, and then he stretched, yawned, and typed A BAD A BAD DOOG. This was probably just a familiar phrase that he’d chosen at random; Borgese estimated its likelihood at 1 in 12.)

Arli did earn at least one human fan — at one point Borgese showed his output to a “well-known critic of modern poetry,” who responded, “I think he has a definite affinity with the ‘concretist’ groups in Brazil, Scotland, and Germany [and an unnamed young American poet] who is also writing poetry of this type at present.”

I don’t know why this never caught on — in 1959 Klara Karwowska invented little windshield wipers for eyeglasses:

The present invention is directed to a wiper means for maintaining the lenses clean or clear of steam, rain, snow, or other foreign matter, and the wiper mechanism of the present invention includes a source of electrical energy such as the battery which may be secured to the frame in any suitable manner.

The battery would make them a little bulky, but that’s a small price to pay for clear vision. I could wear these in the shower!

In 1960, British researcher Donald Michie combined his loves of computation and biology to consider whether a machine might learn — whether by consulting its record of past experience it could perform tasks with progressively greater success.

To investigate this he designed a machine to play noughts and crosses (or tic-tac-toe). He called it the Machine Educable Noughts And Crosses Engine, which gives it the pleasingly intimidating acronym MENACE. MENACE consists of 304 matchboxes, each of which represents a board position. Each box contains a collection of beads representing available moves in that position, and after each game these collections are adjusted in light of the outcome (as described here). In this way the engine learns from its experience — over time it becomes less likely to play losing moves, and more likely to play winning (or drawing) ones, and it becomes a more successful player as a result.

University College London mathematician Matthew Scroggs describes the engine above, and he’s built an online version that you can try out for yourself — it really does get noticeably better as it plays.

In the early days of typewriting, this was usually the first thing typed on each new typewriter after it rolled off the production line:

A worker known as an aligner typed it to check that the resulting letters were aligned correctly on the platen.

How does it work? ‘Amaranath,’ the misspelled name of an imaginary flower, checks the alignment of the vowel ‘a’ between a number of common consonants. ‘Oronoco’ checks the ‘o’ key, while ‘secedes,’ ‘initiation’ and ‘Uruguay’ check three vowels that are among the most commonly used of all letters, ‘e,’ ‘i,’ and ‘u.’ ‘Sasesusos’ not only compares four of the five vowels in the same word against the baseline of the letter ‘s,’ but also ‘includes several of the most common letter combinations in twentieth-century business English.’ ‘Philadelphia’ checks the horizontal alignment of ‘i’ and ‘l,’ the narrowest letters on the keyboard.

What does “Amaranath sasesusos Oronoco initiation secedes Uruguay Philadelphia” actually mean? “Unlike most sentences, it was rarely spoken, and no one particularly cared what it might mean in the conventional sense.” (The “quick brown fox” came later.)

Humans tend to abuse sea creatures, so digital artist Neil Mendoza gave them a way to fight back. As Smashie the fish swims around his aquatic habitat, he takes aim at the human habitat outside; the hammer drops periodically when a rotating cam releases it.

Mendoza created the project through Autodesk’s artist-in-residence program. You can build your own “fish hammer actuation device” with the instructions here.

New York’s Citicorp Tower was an architectural sensation when it opened in 1977. But then engineer William LeMessurier realized that its unique design left it dangerously vulnerable to high winds. In this week’s episode of the Futility Closet podcast we’ll describe the drama that followed as a small group of decision makers tried to ward off a catastrophe in midtown Manhattan.

We’ll also cringe at an apartment mixup and puzzle over a tolerant trooper.

END_OF_DOCUMENT_TOKEN_TO_BE_REPLACED

Samuel Morse’s original plan for Morse code was to assign numbers to words; the operator would have to look up each number in a codebook as it was received in order to find its meaning. Morse’s New Jersey collaborator Alfred Vail thought this was tedious and expanded the code to a system of dots and dashes, where each letter of the alphabet was represented by a series of symbols.

To keep this simple he needed to work out the relative frequency of English letters, so that the most commonly used letters could get the shortest sequences of symbols. And “a happy idea enabled him to save his time. He went to the office of the local newspaper in Morristown and found the result he wanted in the type-cases of the compositors. The code was then arranged so that the most commonly used letters were indicated by the shortest symbols — a single dot for an E, a single dash for T and so on.”

Despite such breakthroughs, Vail finally left the telegraph business because he felt it didn’t value his contributions — even as superintendent of the Washington and New Orleans Telegraph Company he received only $900 a year. He wrote to Morse in 1848, “I have made up my mind to leave the Telegraph to take care of itself, since it cannot take care of me. I shall, in a few months, leave Washington for New Jersey, … and bid adieu to the subject of the Telegraph for some more profitable business.”

(From Russell W. Burns, Communications: An International History of the Formative Years, 2004.) 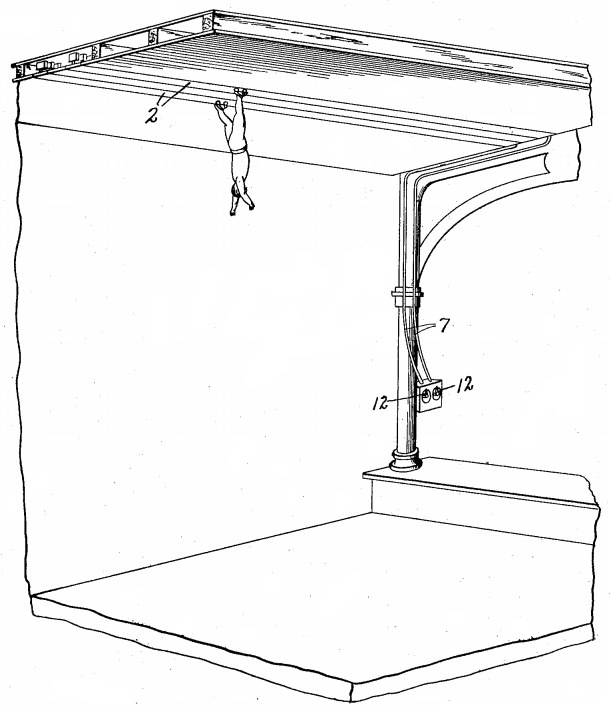 Here’s a lost art: “Ceiling walking” was a popular form of American entertainment as early as 1806, when “Sanches, the Wonderful Antipodean” wore iron shoes that were “fitted in grooves in a board fastened to the top of the stage.”

Spectacles such as this were drawing crowds right through the 19th century. In New Orleans in the 1880s a young “human fly” named Mademoiselle Aimee was carried by her teeth to a trapeze 50 feet in the air, from which she affixed her feet to the ceiling by some indistinct means. “Many such exclamations as ‘My God!’ ‘Oh My!’ and so on follow, and as she puts one foot before the other, walking in a forward direction, the situation is most thrilling,” marveled the Daily Picayune. “Often ladies have fainted at the sight of the almost child’s peril, and men have trembled while looking up at her. Many refuse to look up at all and those who do continue to look are in constant apprehension of a terrible accident. There is no question in the world but that the feat is without parallel in the matter of tempting fate.”

How was this done? There seem to be a range of answers. V. Waid’s “Theatrical Device” of 1905 used vacuum cups attached to the fly’s feet, but both E.I. George’s “Electric Aerial Ambulating System” of 1909 (above) and C.H. Newman and W. Berrigan’s “Electrical Device to Enable Showmen to Walk on the Ceiling” of 1885 used electromagnets.

How would this have evolved if it had remained popular? What would we be using today?

Corbett took a strangely romantic view of this: “The whole aspect becomes that of a very modernized Venice, a city of arcades, plazas and bridges, with canals for streets, only the canals will not be filled with real water but with freely flowing motor traffic, the sun glistening on the black tops of the cars and the buildings reflecting in this waving flood of rapidly rolling vehicles.”

By 1975, Corbett wrote, Manhattan could be a network of 20-lane streets in which pedestrians walk from “island” to “island” in a “system of 2,028 solitudes.” That doesn’t feel so different from what we have today.

Related: The city of Guanajuato, Mexico, is built on extremely irregular terrain, and many of the streets are impassable to cars. To compensate, the residents have converted underground drainage ditches and tunnels into roadways (below). These had been dug for flood control during colonial times, but modern dams have left them dry. (Thanks, David.)