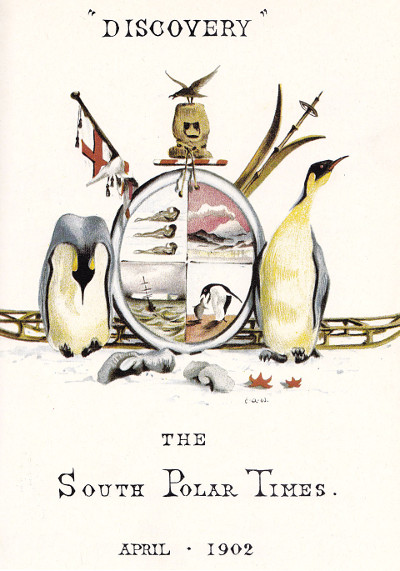 During Robert Falcon Scott’s first Antarctic expedition, 1901–04, Ernest Shackleton edited an illustrated magazine, the South Polar Times, to entertain the crew. Each issue consisted of a single typewritten copy that would circulate among up to 47 readers aboard the Discovery, Scott’s steam-powered barque, through each of two dark winters. Contributors would drop their anonymous essays, articles, and poems into a mahogany letterbox, and Shackleton composed each issue on a Remington typewriter perched atop a storeroom packing case.

The first issue appeared on April 23, 1902, and was, Shackleton noted, “greatly praised!” Scott wrote, “I can see again a row of heads bent over a fresh monthly number to scan the latest efforts of our artists, and I can hear the hearty laughter at the sallies of our humorists and the general chaff when some sly allusion found its way home. Memory recalls also the proud author expectant of the turn of the page that should reveal his work and the shy author desirous that his pages should be turned quickly.”

Shackleton was invalided home that summer, but other crewmembers took over the magazine for him that winter and indeed again on Scott’s second expedition in 1911. BBC History has some scans. 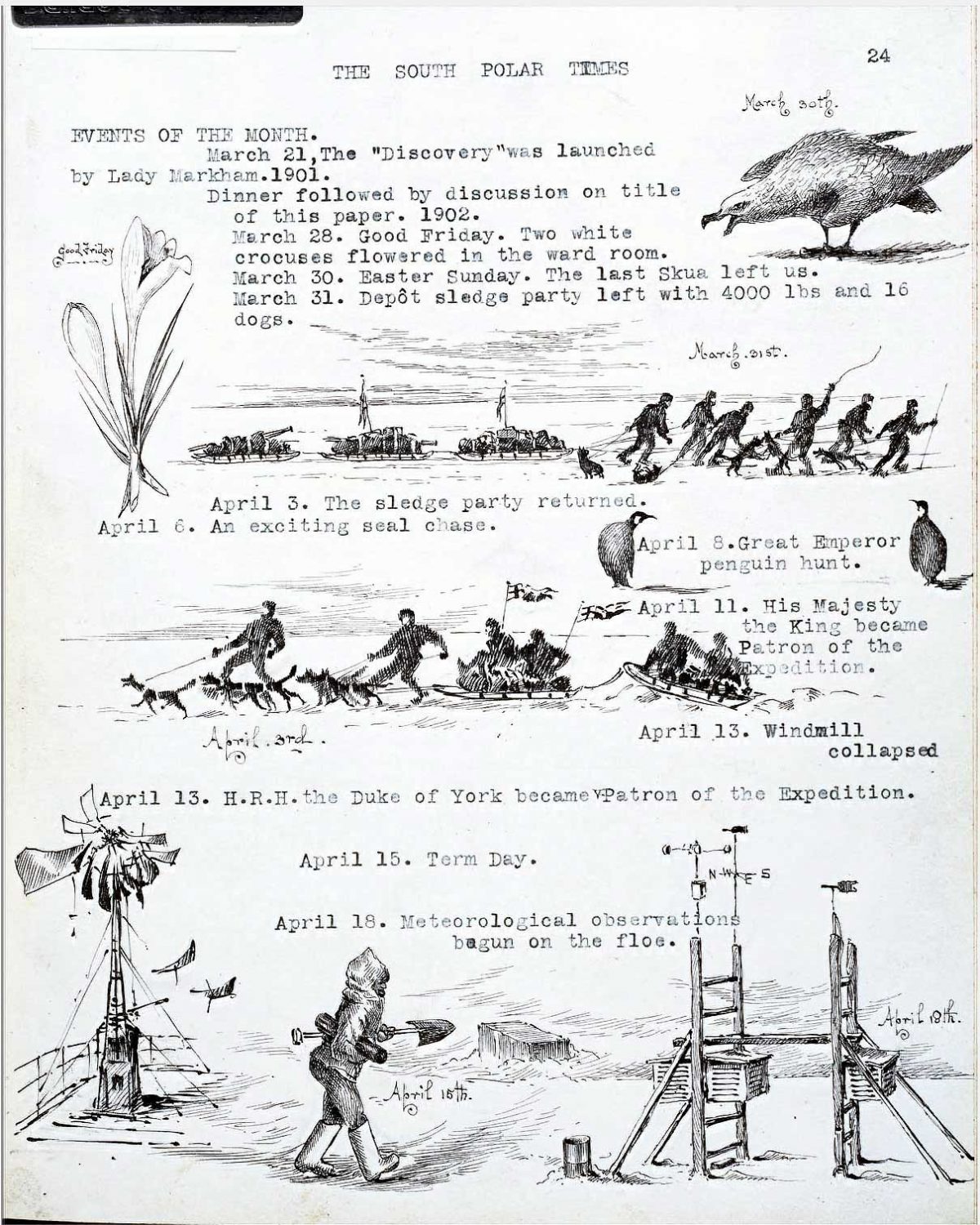 Again, speaking of probability, there is the story of the statistician who told a friend that he never takes airplanes. When asked why, he replied that he computed the probability that there be a bomb on the plane, and that although the probability was low, it was too high for his comfort.

A week later, the friend met him on a plane and asked him why he changed his theory. He replied: ‘I didn’t change my theory. It’s just that I subsequently computed the probability that there simultaneously be two bombs on the plane. This is low enough for my comfort, and so I now carry my own bomb.’

Amazingly, each of these denominators is the product of two distinct primes (discovered by A.W. Johnson in 1978).

Can a sum of such fractions produce any natural number? That’s conjectured — but so far unproven.

University of Toronto mathematician Ed Barbeau tells of a Montana student who was asked to find the cost of fencing the perimeter of a rectangular field 132 feet long and 99 feet wide, given that there are 16.5 feet in a rod and that one rod of fencing costs $12.75. The student first worked out five products:

He crossed out all but the third and fifth of these and continued:

All cats are mortal.

Therefore Socrates is a cat.

Dutch mathematician Hans Freudenthal proposed this puzzle in 1969 — at first it appears impossible because so little information is given.

X and Y are two different whole numbers greater than 1. Y is greater than X, and their sum is no greater than 100. S and P are two logicians; S knows the sum X + Y, and P knows the product X × Y. S and P both reason perfectly, and both know everything I’ve just told you.

What are X and Y? 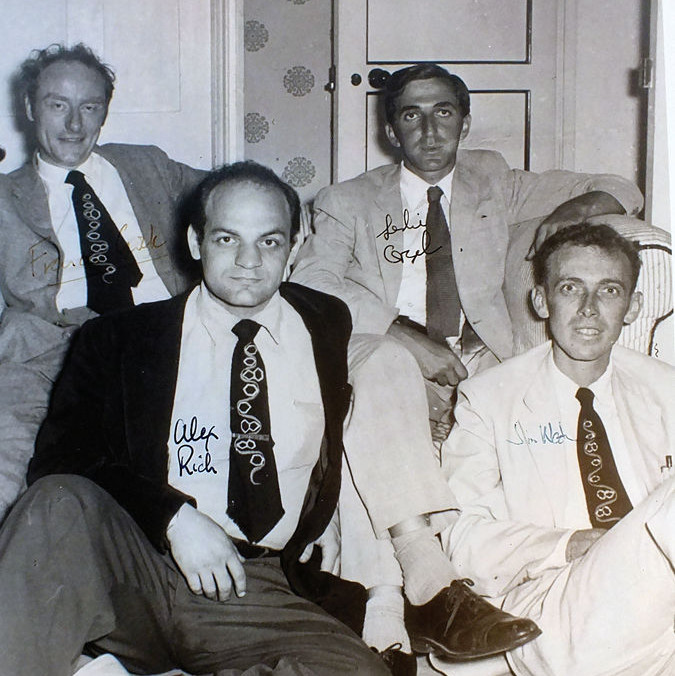 In 1954, James Watson and George Gamow formed a “gentleman’s club” to “solve the riddle of the RNA structure and to understand how it built proteins.” There were 20 members, each of whom was designated by an amino acid:

“We were just drinking California wine and we got the idea,” Gamow recalled. Each member was given a black woolen necktie with an RNA helix embroidered in green and yellow (above are Crick, Rich, Orgel, and Watson).

Each also received a gold tiepin with the three-letter abbreviation of his amino acid (which led several people to ask Gamow why his pin bore the wrong monogram).

Adopting the motto “Do or die, or don’t try,” they met twice a year to share ideas, cigars, and alcohol. Several went on to become Nobel laureates — but it fell to Marshall Nirenberg, a non-member, to finally decipher the code link between nucleic and amino acids. 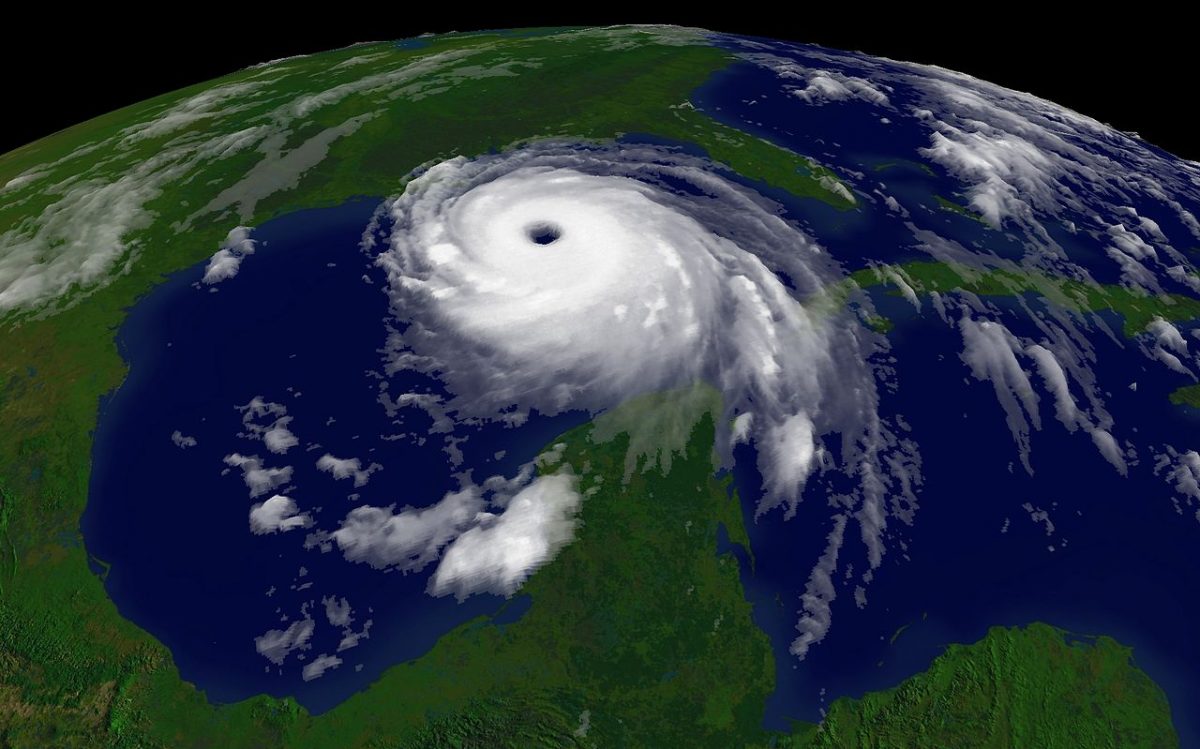 In 2008, University of Michigan psychologist Jesse Chandler and his colleagues examined donations to disaster relief after seven major hurricanes and found that a disproportionately large number of donations came from people who shared an initial with the hurricane (e.g., people named Kate and Kevin after Hurricane Katrina).

It’s not clear why this is. It’s known that generally people attend to information with unusual care if it’s somehow relevant to themselves; in the case of a hurricane this may mean that they’re more likely to remember concrete information about victims and thus be more likely to donate.

Possibly they also feel more intense negative feelings (or a greater sense of responsibility) when the storm shares their initial. In that case, “Exposure to a same-initial hurricane makes people feel worse, and the most salient way to repair this feeling is the opportunity to donate money to Katrina.”

Jack Hodkinson, who created the Corpus-Christi-College-shaped prime number that I mentioned last week, has sent along a remarkable followup produced by string rewriting. Here are the rules:

The top row lists pixels of various colors; on each pass we’ll be replacing each of these with the 3 × 3 square beneath it. Start with a single color: 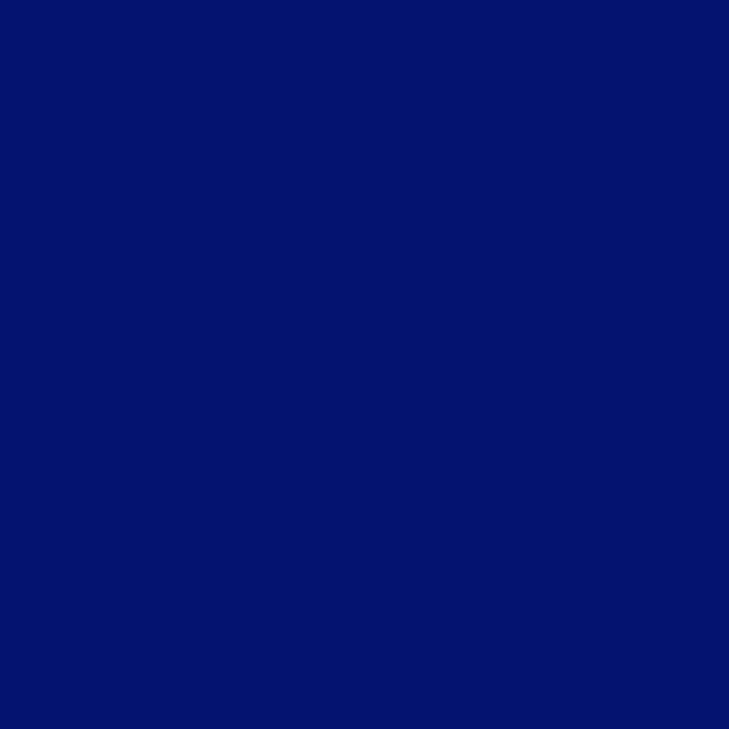 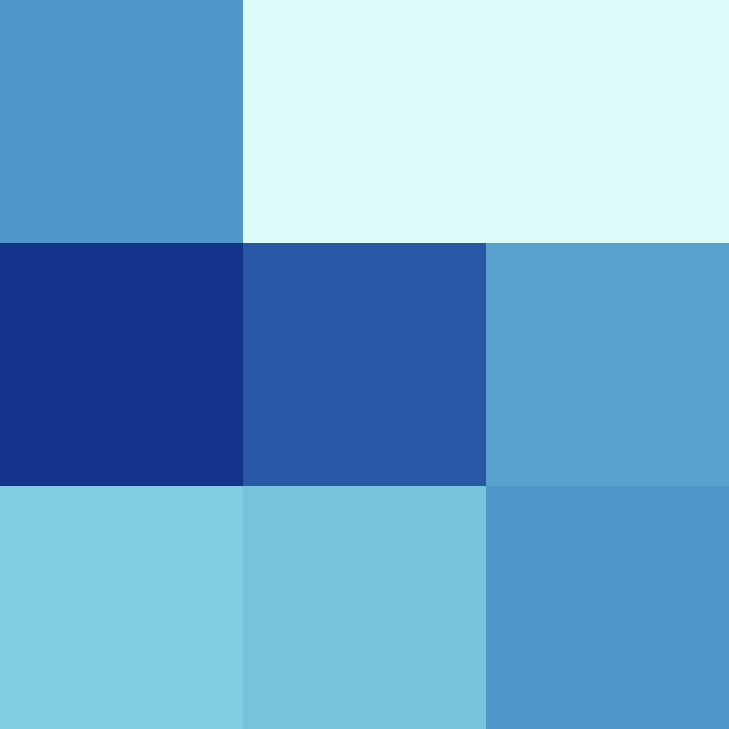 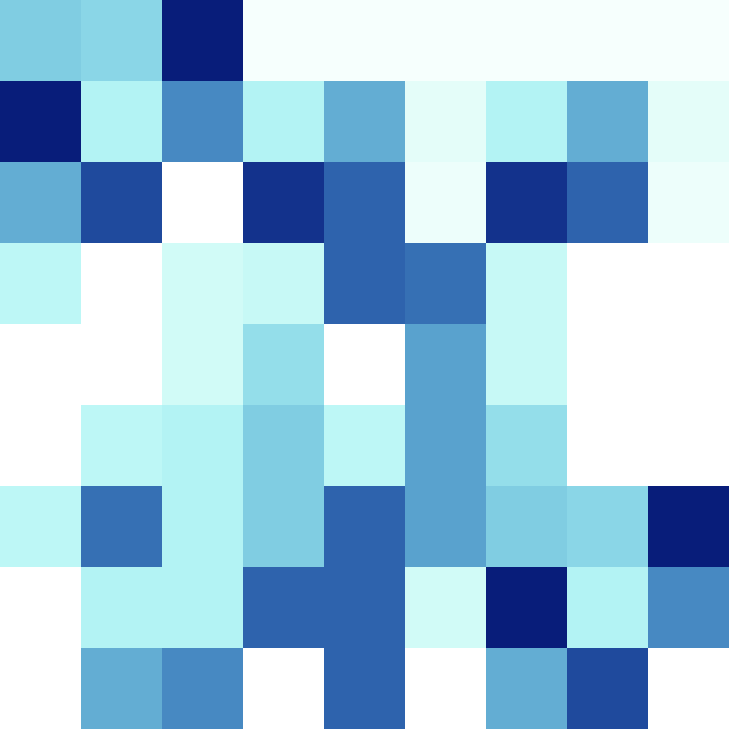 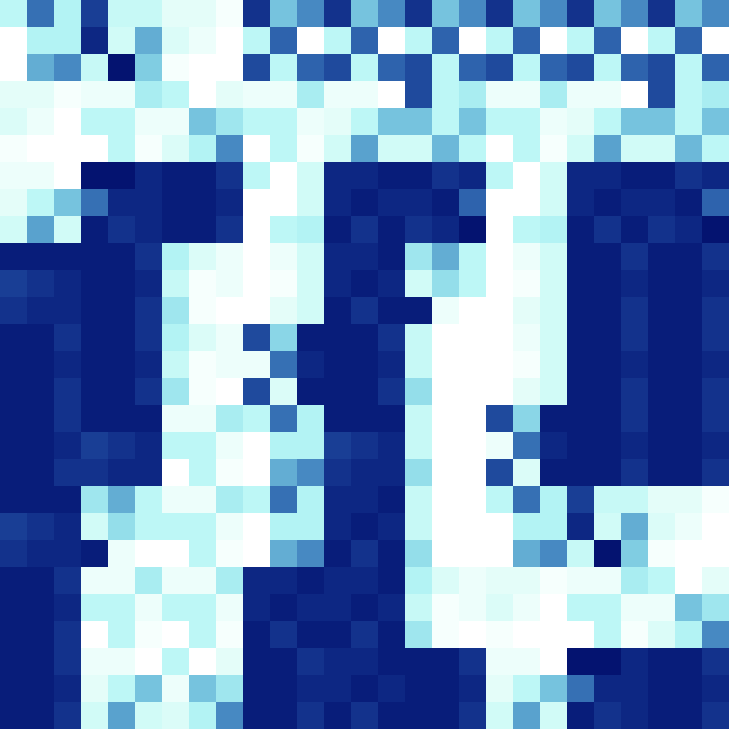 After four iterations the rules produce a portrait of π: 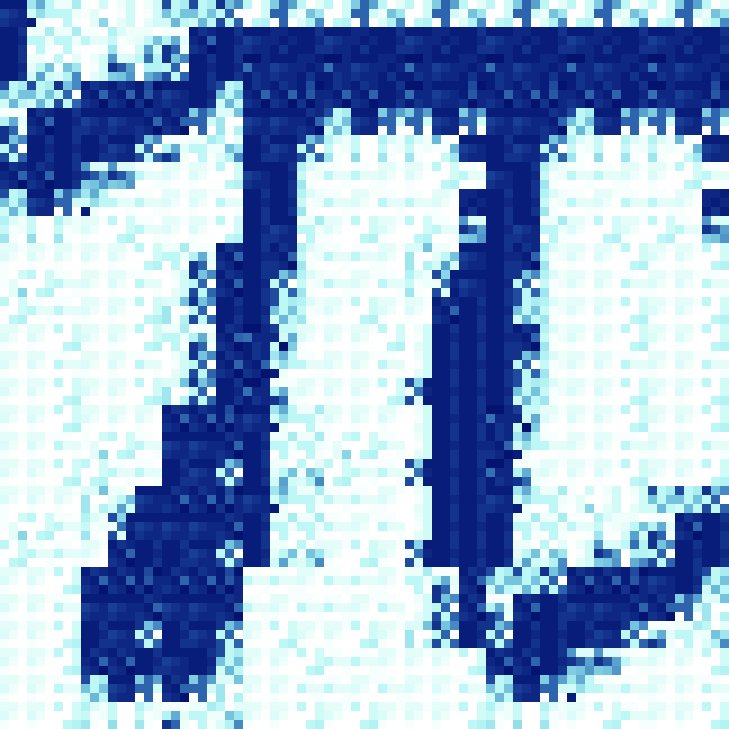 And, charmingly, if we keep going, smaller πs begin to appear, due to the presence of dark pixels in the third image: 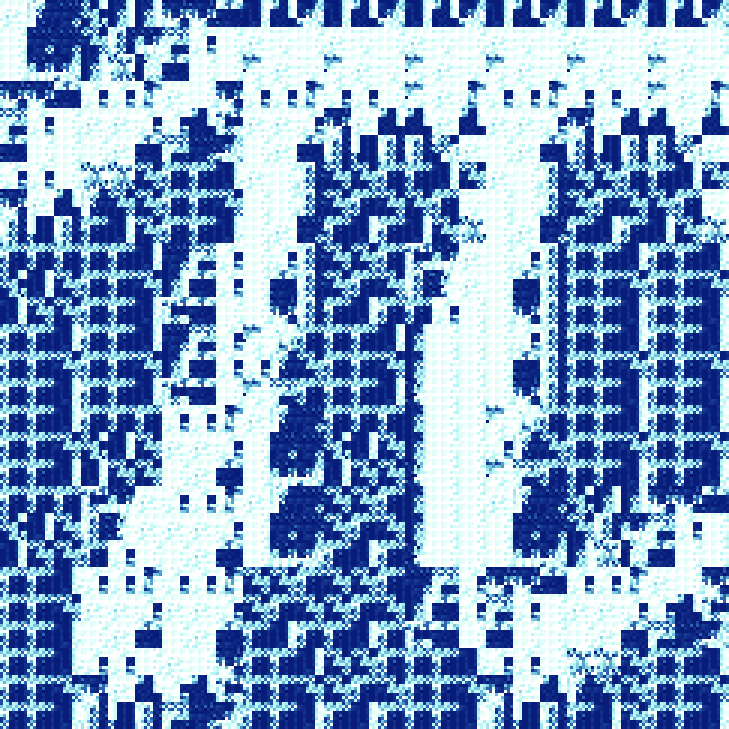 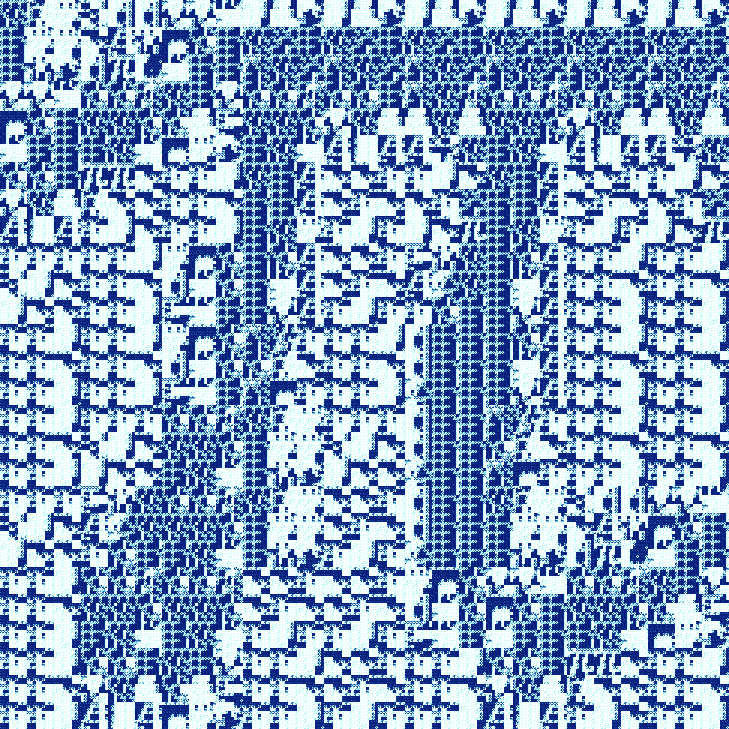 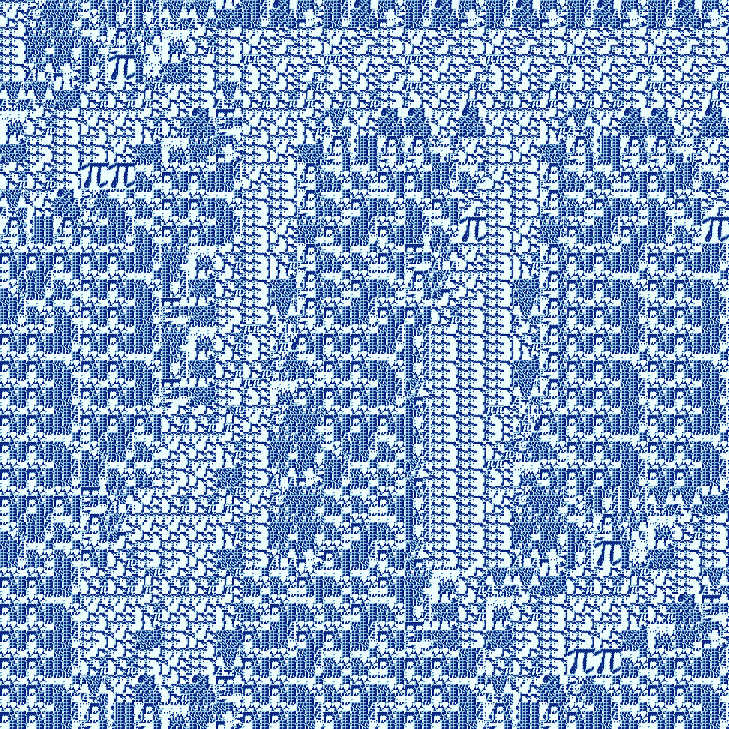 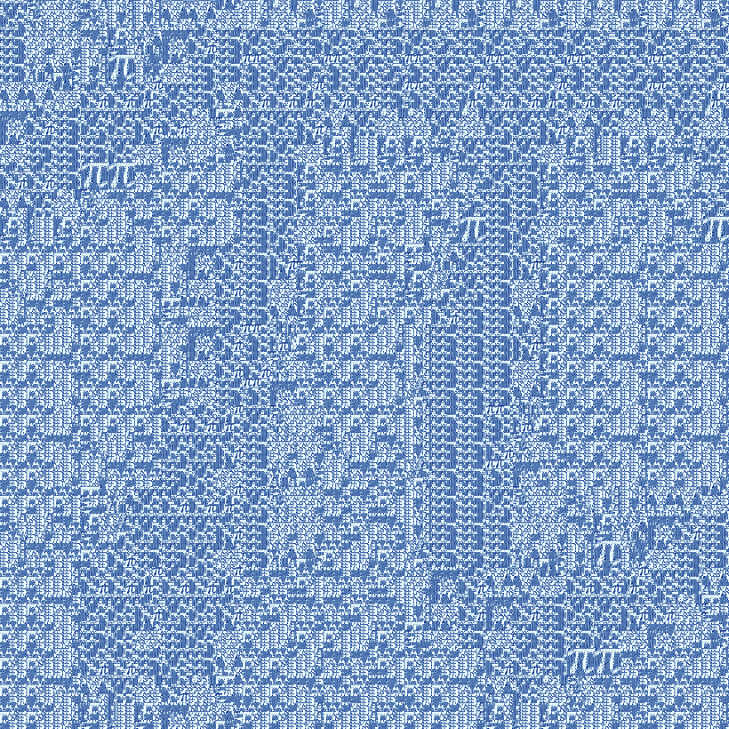 And so on forever. “After iteration 8, it’s turtles all the way down.”

For those who want more information, Jack explains the rewriting rules in detail here.

(Note: To conserve bandwidth I’ve had to reduce the last two images above — you can find the full-resolution PNGs in this imgur gallery.) 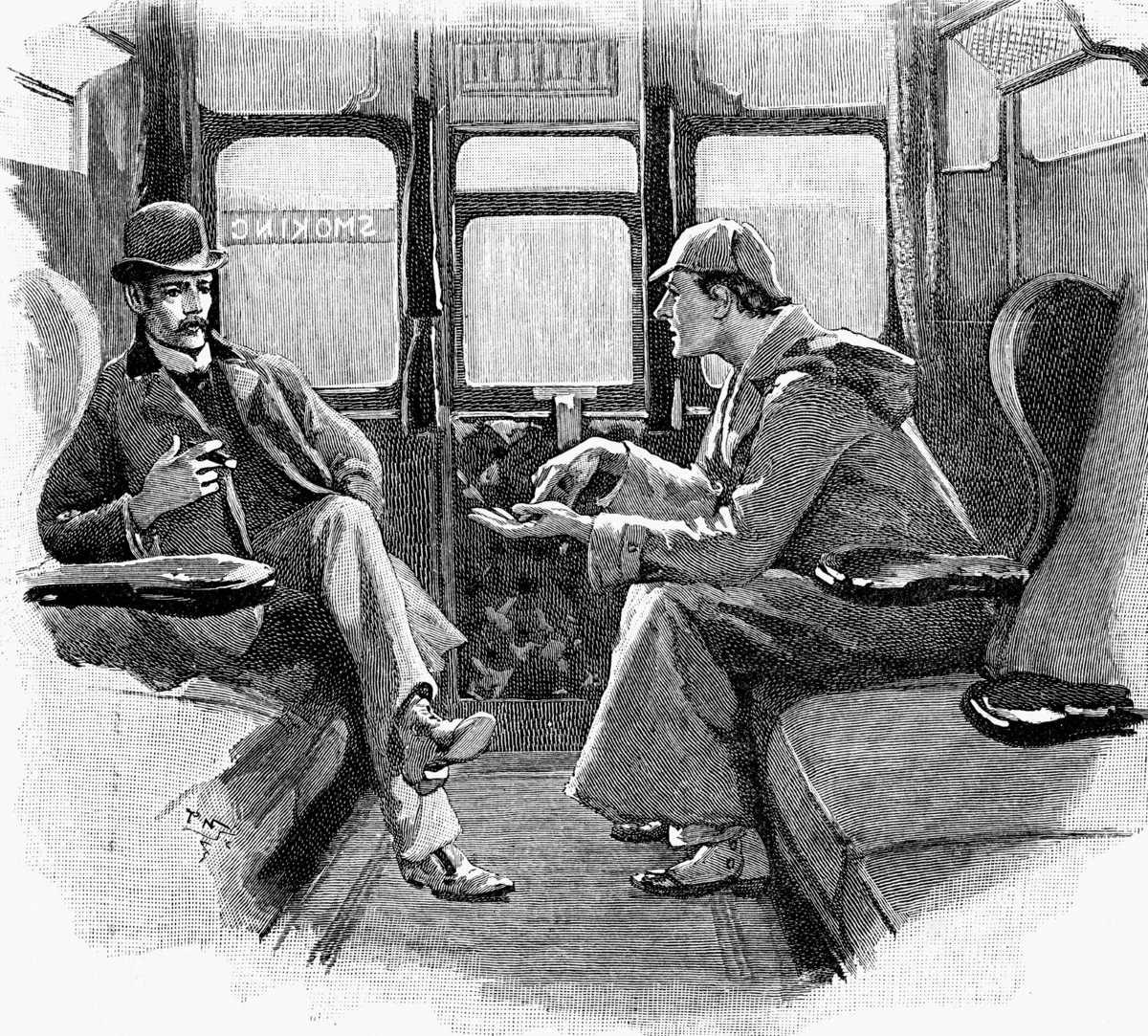 At the start of the 1892 story “Silver Blaze,” Sherlock Holmes and Watson set out on a train journey from Paddington to Swindon in a first-class train carriage.

“We are going very well,” says Holmes, looking out the window and glancing at his watch. “Our rate at present is fifty-three and a half miles an hour.”

“I have not observed the quarter-mile posts,” says Watson.

“Nor have I,” replies Holmes. “But the telegraph posts upon this line are sixty yards apart, and the calculation is a simple one.”

Is it? The speed itself is plausible — trains were allowed 87 minutes to travel the route, giving an average speed of 53.25 mph, and so the top running speed would have been higher than this. But A.D. Galbraith complained that the detective’s casual statement is “completely inconsistent with Holmes’ character.” Using the second hand of his watch, he’d had to mark the passage of two successive telegraph posts, probably a mile or more apart, and count the posts between them; an error of more than one second would produce an error of almost half a mile an hour. So Holmes’ scrupulous dedication to accuracy should have led him to say “between 53 and 54 miles an hour” or even “between 52 and 55.”

Guy Warrack, in Sherlock Holmes and Music, agreed: It would have been impossible to time the passage of the telegraph poles to the necessary precision using a pocket watch. But S.C. Roberts, in a review of the book, disagreed:

Mr. Warrack, if we may so express it, is making telegraph-poles out of fountain-pens. What happened, surely, was something like this: About half a minute before he addresssed Watson, Holmes had looked at the second hand of his watch and then counted fifteen telegraph poles (he had, of course, seen the quarter-mile posts, but had not observed them, since they were not to be the basis of his calculation). This would give him a distance of nine hundred yards, a fraction over half-a-mile. If a second glance at his watch had shown him that thirty seconds had passed, he would have known at once that the train was traveling at a good sixty miles an hour. Actually he noted that the train had taken approximately thirty-four seconds to cover the nine hundred yards; or, in other words, it was rather more than ten per cent (i.e., 6 1/2 from sixty). The calculation, as he said, was a simple one; what made it simple was his knowlege, which of course Watson did not share, that the telegraph poles were sixty yards apart.

Julian Wolff suggested examining the problem “in the light of pure reason.” The speed in feet per second is found by determining the number of seconds required to travel a known number of feet. Holmes says that the posts are 60 yards apart, so 10 intervals between poles is 1800 feet, and the speed in covering this distance is 1800/T feet per second. Multiply that by 3600 gives feet per hour, and dividing the answer by 5280 gives the speed in miles per hour. So:

So to get the train’s speed in miles per hour we just have to divide 1227.27 by the number of seconds required to travel 1800 feet. And “1227 is close enough for all ordinary purposes, such as puzzling Watson, for instance.”