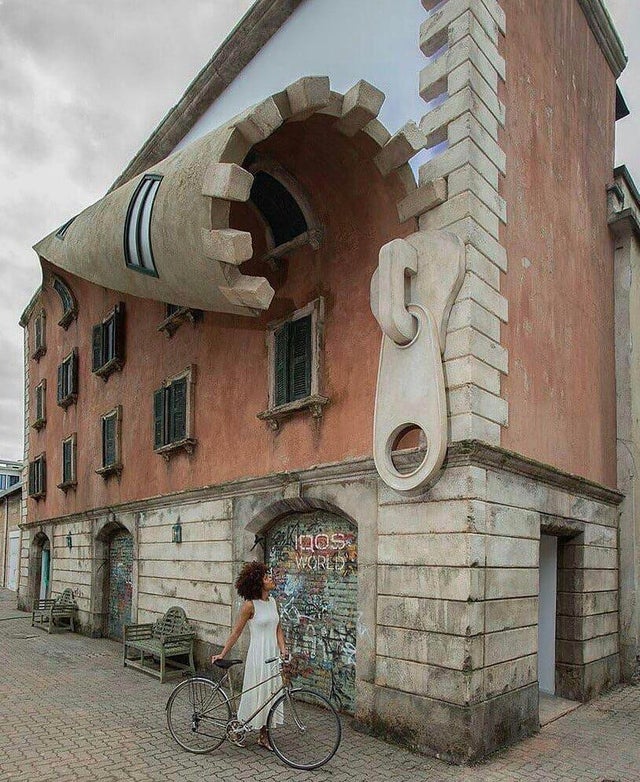 habitacle
n. a dwelling-place or habitation

crispation
n. the state of being curled

affabrous
adj. ingeniously made or finished

British artist Alex Chinneck designed this unzipped building facade for Milan Design Week in 2019. The theme is continued inside, where giant zippers create openings in walls and the floor. More at Dezeen. 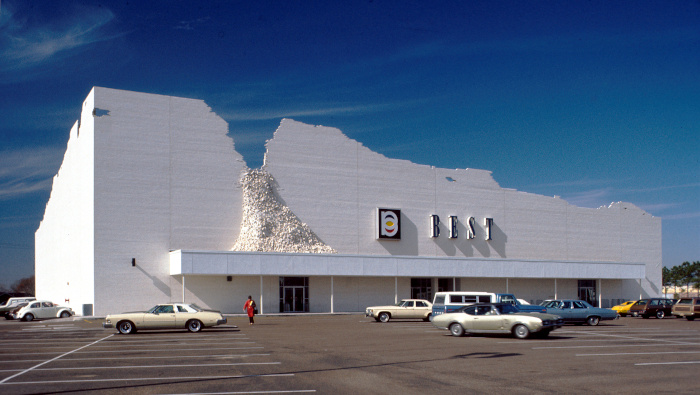 Founded in 1957, catalog showroom Best Products distinguished itself with highly unorthodox facades, designed by architect James Wines for nine retail facilities across the United States. This one, the “Indeterminate Facade” in Houston, Texas, was said to have appeared in more books on 20th-century architecture than photographs of any other modern structure. The company eventually went bankrupt, and most of the buildings have been redesigned or demolished, but one in Richmond, Va., with a forest in its entryway, is now home to a Presbyterian church.

In the Kinkerbuurt, Amsterdam, the streets are named after Dutch poets and writers of the 18th and 19th centuries. Correspondingly, Yugoslavian artist Sanja Medic transformed the façade of a local building into a case holding 250 ceramic “books” by these authors.

It’s a substantial library — each volume weighs more than 25 kg, so the frontage had to be reinforced to support them.

Scheublin’s table walks using a system of cranks and rods, “perplexing our perception of the ordinarily static piece of furniture.” 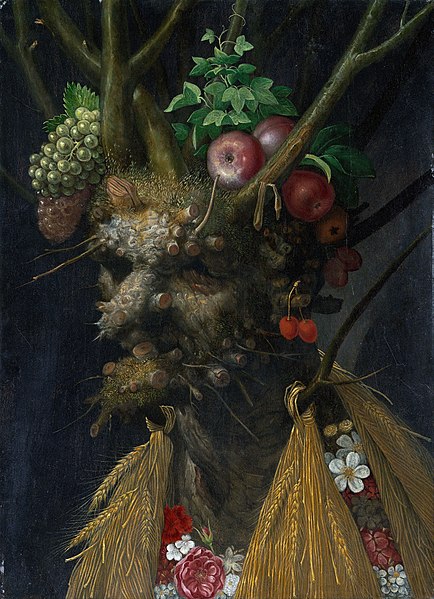 Four Seasons in One Head, by Giuseppe Arcimboldo, painted around 1590 and rediscovered only in 2006.

The Renaissance master regularly made people out of things.

In 1995, Alma College mathematician John F. Putz counted the measures in Mozart’s piano sonatas, comparing the length of the exposition (a) to that of the development and recapitulation (b):

He found that the ratio of b to a + b tends to match the golden ratio. For example, the first movement of the first sonata is 100 measures long, and of this the development and recapitulation make up 62. “This is a perfect division according to the golden section in the following sense: A 100-measure movement could not be divided any closer (in natural numbers) to the golden section than 38 and 62.”

Ideally there are two ratios that we could hope would hew to the golden section: The first relates the number of measures in the development and recapitulation section to the total number of measures in each movement, and the second relates the length of the exposition to that of the recapitulation and development. The first of these gives a correlation coefficient of 0.99, the second of only 0.938.

So it’s not as impressive as it might be, but it’s still striking. “Perhaps the golden section does, indeed, represent the most pleasing proportion, and perhaps Mozart, through his consummate sense of form, gravitated to it as the perfect balance between extremes,” Putz writes. “It is a romantic thought.” 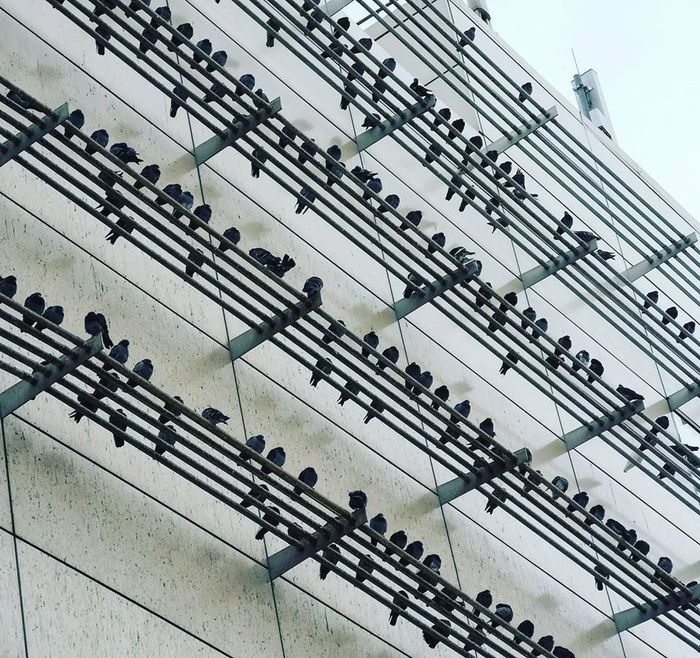 This image turned up in the subreddit Confusing Perspectives back in February.

One user wrote, “Someone needs to make this into real sheet music and see how it sounds. I’m curious now.”

Miller · Birds on a Wire Transposed

In 2013, University of Minnesota geography student Daniel Crawford composed “A Song of Our Warming Planet,” a solo cello piece built on climate data. The pitch of each note corresponds to the average annual surface temperature of a year in the range 1880-2012 in data from NASA’s Goddard Institute of Space Studies; each ascending halftone represents roughly 0.03°C in planetary warming.

“Climate scientists have a standard toolbox to communicate their data,” Crawford said. “We’re trying to add another tool to that toolbox, another way to communicate these ideas to people who might get more out of music than maps, graphs, and numbers.”

Below: He later applied the same method to create a string quartet using data from 1880 to 2014. The four parts reflect the average annual temperatures in four regions: the cello the equatorial zone, the viola the mid-latitudes, and the violins the high latitudes and the arctic.