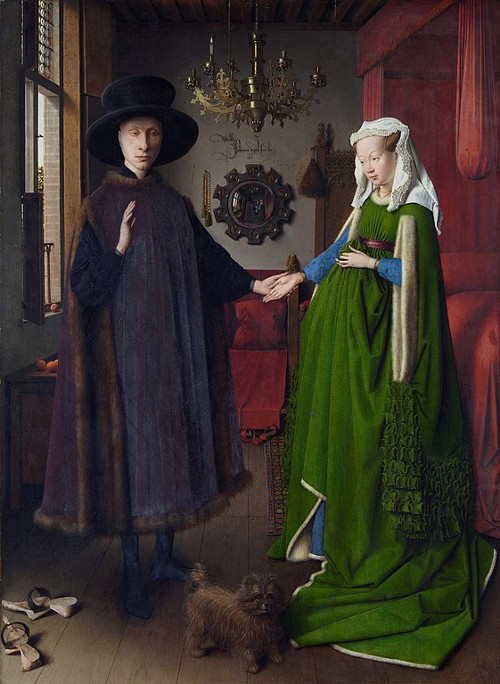 There’s an interesting detail in Jan van Eyck’s Arnolfini Portrait of 1434. The painting depicts Italian merchant Giovanni di Nicolao Arnolfini and his wife in their home in Bruges. In the background is a convex mirror over which is inscribed the legend “Johannes de eyck fuit hic 1434” (“Jan van Eyck was here 1434”). And curiously, reflected in the mirror, where we’d expect to see the painter and his easel, are two figures: 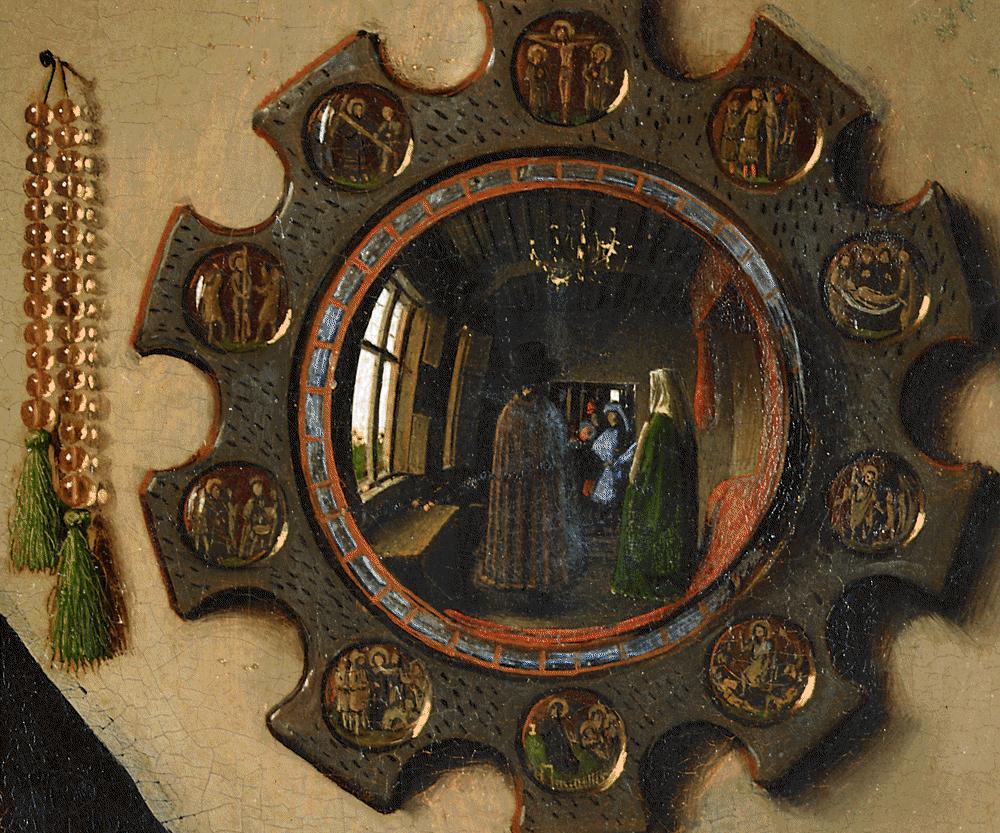 In 1934 art historian Erwin Panofsky offered a unique explanation for this: The painting is an “artistic marriage certificate.” Neither Arnolfini nor his new wife had any relatives at Bruges at the time of their marriage, and the custom at the time was to record two witnesses to the wedding. “So that we can understand the original idea of a picture which was a memorial portrait and a document at the same time, and in which a well-known gentleman-painter signed his name both as artist and as witness.”

Amused by the reflection, Hungarian graphic designer István Orosz set up his own arrangement in his 1997 etching Johannes de Eyck fuit hic, below. “Here I attempt to show the world behind the door with the help of two mirrors.” 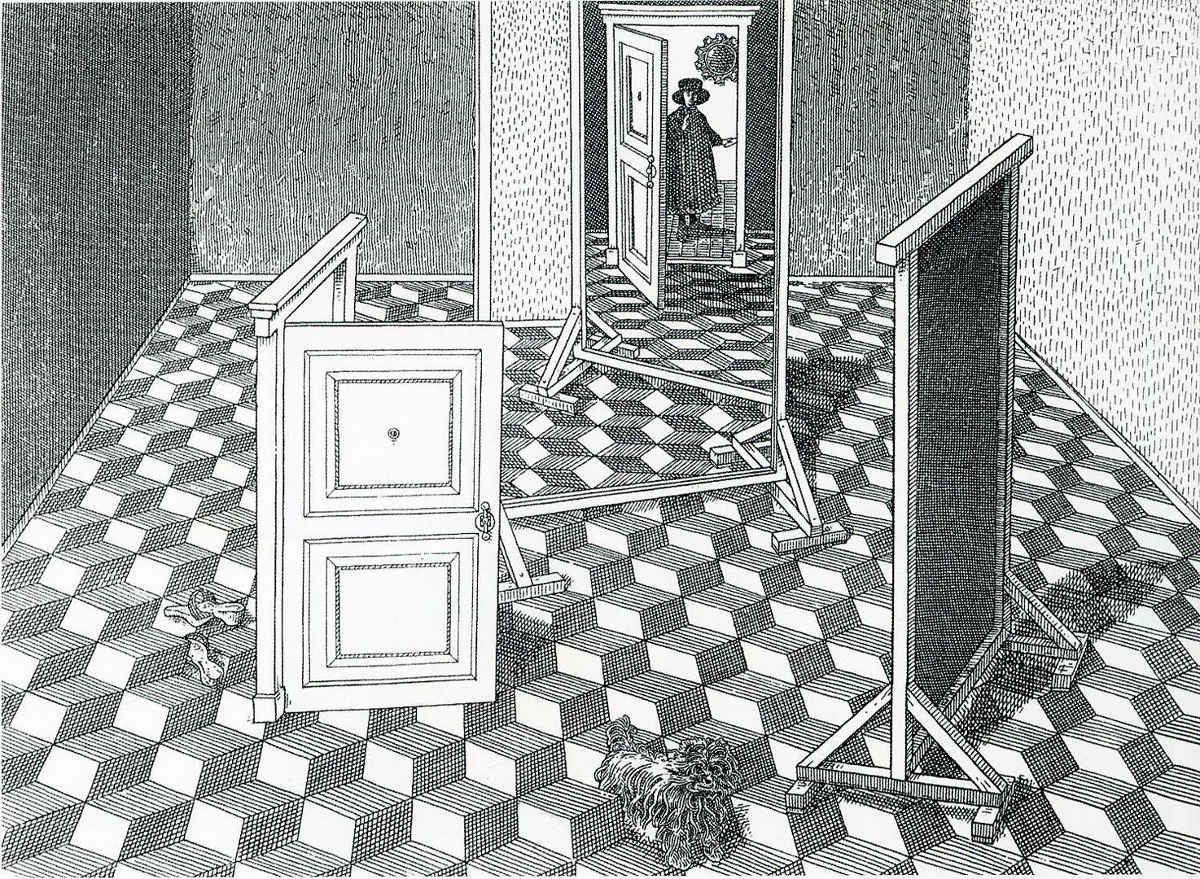 For a thousand bucks you can buy your own Van Eyck mirror and investigate for yourself.

If you can convince yourself that the front half of this sphere is transparent, and that the image is painted on the interior of the back half, you’ll find that you’re inside the cage, turning to your left, while the birds are outside the cage, looking in at you. (To get started, I find it helps to focus on an edge of the sphere, rather than the center.)

There are many more examples on Termes’ YouTube channel. 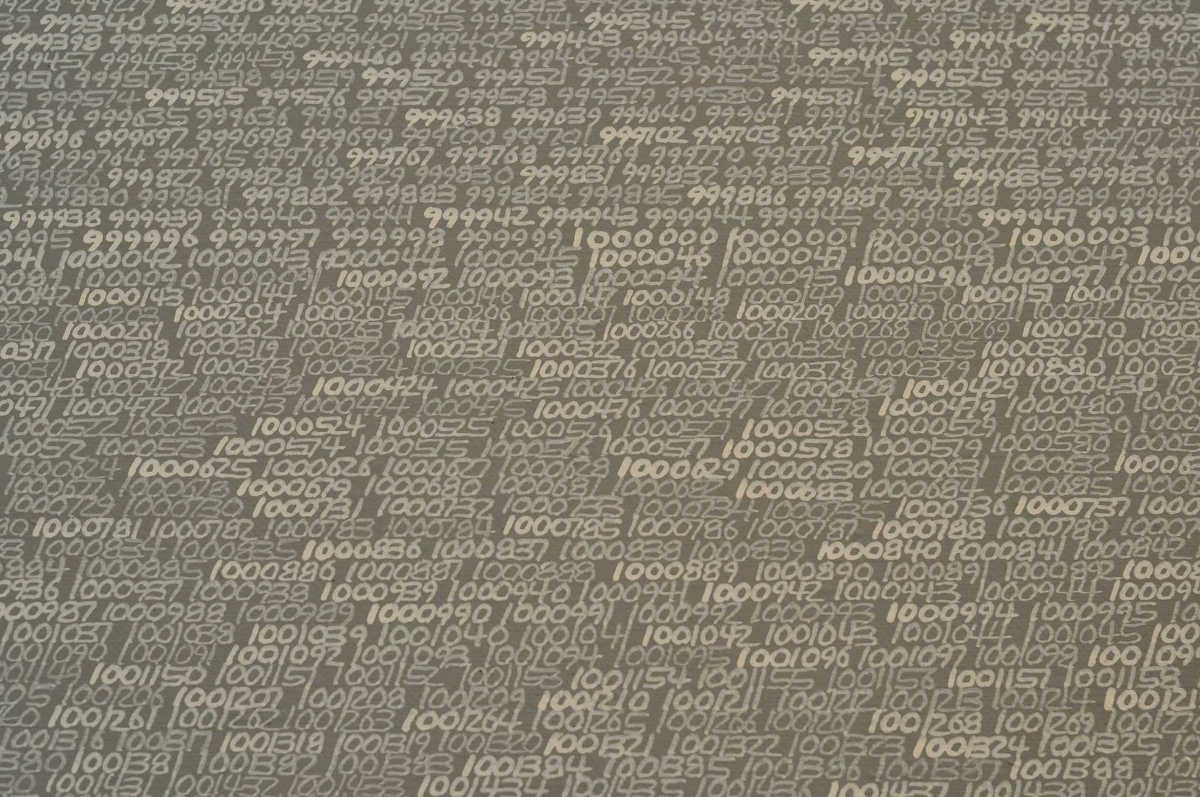 In 1965, Polish artist Roman Opałka hung a 196 × 135 cm canvas in his Warsaw studio. In the top left corner he painted a tiny numeral 1, then a 2, and so on until he had filled the canvas with numbers. Then he put up a new canvas and continued where he had left off. He called these images “details”; all of them had the same size and the same title, 1965 / 1 – ∞.

He vowed to spend the rest of his life on the project. “All my work is a single thing,” he said, “the description from number one to infinity. A single thing, a single life. … The problem is that we are, and are about not to be.”

At the start he painted white numbers on a black background, but in 1972 he began gradually to lighten the black with each detail, saying that his goal was “to get up to the white on white and still be alive.” He expected that this would happen when he reached 7777777 … but at the time of his death, in 2011, he’d got only as far as 5607249. 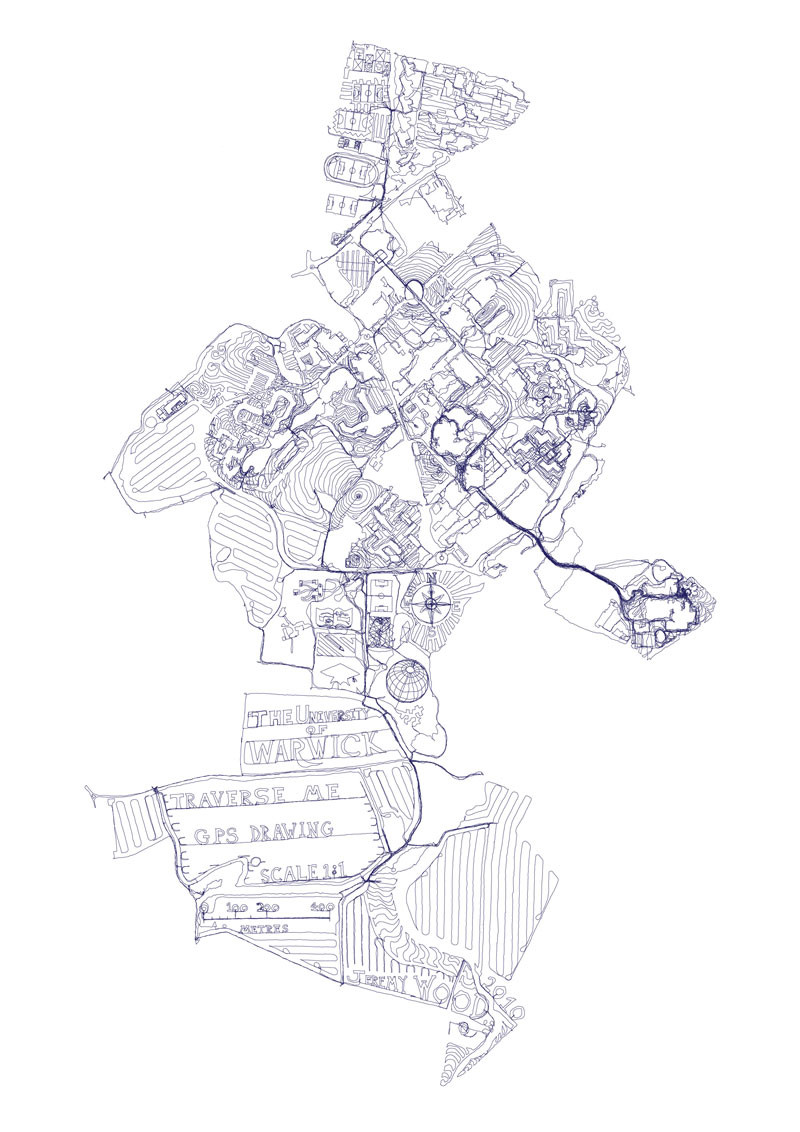 In 2010 Jeremy Wood walked around the campus of the University of Warwick with a GPS device to “draw” a map at 1:1 scale. Altogether he covered 238 miles in 17 days.

“He stayed in the Maths Houses on Gibbet Hill so the line through Tocil Wood to the Mead Gallery is exceptionally dark since it was walked so many times,” the university reports. “As he worked his way across the fields towards Kenilworth he began to ‘draw’ images associated with the University, from its crest, to a mortar board, to a globe in homage to the many ‘international’ centres that he encountered in his journeys. Reported to security several times for walking in ‘a suspicious manner’ around Claycroft and Lakeside residences, he soon disappeared from view, walking the countryside that surrounds the University but which is far removed from central campus.”

“I responded to the structure of each location and avoided walking along roads and paths when possible,” Wood writes. “Security was called on me twice on separate occasions and I lost count of how many times I happened to trigger an automatic sliding door.” More at his website and at GPS Drawing.

Somewhat related: Mathematician Jerry Farrell invented a two-player coin-pushing game played on a map of Butler University, his institution. Rebecca Wahl analyzed it in Barry Cipra’s Tribute to a Mathemagician (2005), and Aviezri Fraenkel of Israel’s Weizmann Institute of Science revisited it the following year (PDF).

The Slave of Passion 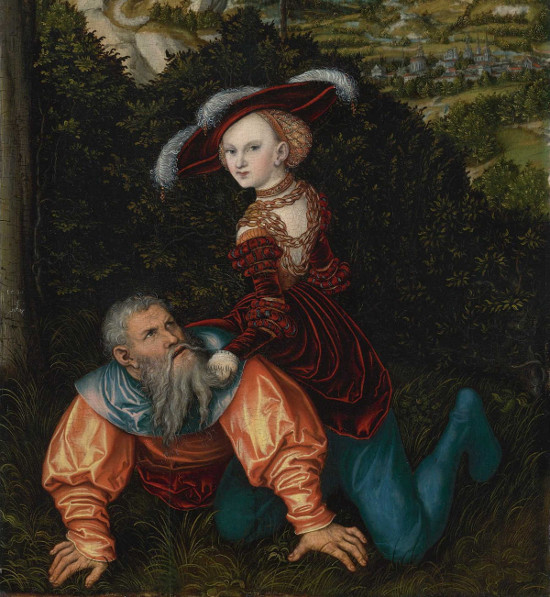 Here’s something odd: a painting of a young lady riding Aristotle like a pony.

In fact what’s surprising is how thoroughly we’ve forgotten this image, which was once one of the most common artistic motifs of the Northern Renaissance, figuring in scores of paintings, sculptures, and engravings.

The woman is Phyllis, the consort of Alexander the Great, who was a pupil of Aristotle. According to a 13th-century manuscript:

Once upon a time, Aristotle taught Alexander that he should restrain himself from frequently approaching his wife, who was very beautiful, lest he should impede his spirit from seeking the general good. Alexander acquiesced to him. The queen, when she perceived this and was upset, began to draw Aristotle to love her. Many times she crossed paths with him alone, with bare feet and disheveled hair, so that she might entice him.

At last, being enticed, he began to solicit her carnally.

‘This I will certainly not do, unless I see a sign of love, lest you be testing me. Therefore, come to my chamber crawling on hand and foot, in order to carry me like a horse. Then I’ll know that you aren’t deluding me.’

When he had consented to that condition, she secretly told the matter to Alexander, who lying in wait apprehended him carrying the queen. When Alexander wished to kill Aristotle, in order to excuse himself, Aristotle says,

‘If thus it happened to me, an old man most wise, that I was deceived by a woman, you can see that I taught you well, that it could happen to you, a young man.’

Hearing that, the king spared him, and made progress in Aristotle’s teachings.

This is an exemplum, a sort of parable designed to warn the reader away from a bad practice — in this case, allowing passion to overcome reason. But it’s nice to see the lesson taught to Aristotle, who once declared that the capacity for practical reason was undeveloped in children, absent in slaves, and “without authority” in women.

Sculptor John V. Muntean writes, “Our scientific interpretation of nature often depends upon our point of view. Perspective matters.” His carving titled Riddle of the Sphinx combines three profiles in one object — a baby, an adult man, and an old man with a walking stick. With each 120 degrees of rotation, the carving’s shadow presents a different picture.

This is impressive enough when it’s carved in mahogany, but Muntean’s Knight Mermaid Pirate Ship, below, works the same trick using LEGOs.

Kurt Vonnegut wrote, “If you can do a half-assed job of anything, you’re a one-eyed man in a kingdom of the blind.” 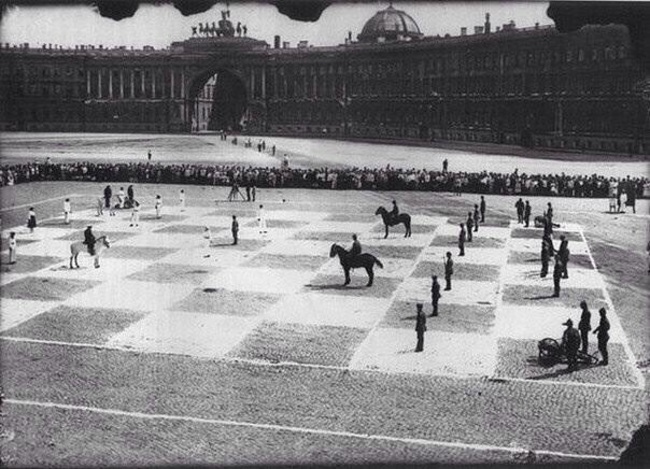 Human-scale chess has been played for centuries — the Italian town of Marostica has staged a game every two years since 1923, and the photo above shows actual soldiers (and cannon!) in a game in St. Petersburg in 1924.

In 2003 Sharilyn Neidhardt organized a game on a board represented by 64 city blocks on the Lower East Side of New York. Two expert players played the game on an ordinary board at the ABC No Rio gallery, in the middle of the street grid. Each time one of them made a move, the corresponding piece received a call or a text message (“go to f7”) and had to travel to the corresponding square, on foot or by bike or roller skate. If you were captured you became an ordinary person again.

Players were recruited online; each had to have a working cell phone, “be excruciatingly on time,” and be willing to spend about three hours awaiting orders. Neidhardt warned newcomers: center pawns can expect to be captured early, bishops and knights will cover a lot of territory, and kings will have a low-key opening and a busy endgame.

As of 2014, eight games had been played, in New York, San Francisco, Vancouver, and Austin. Here’s a knight’s diary of the New York game. 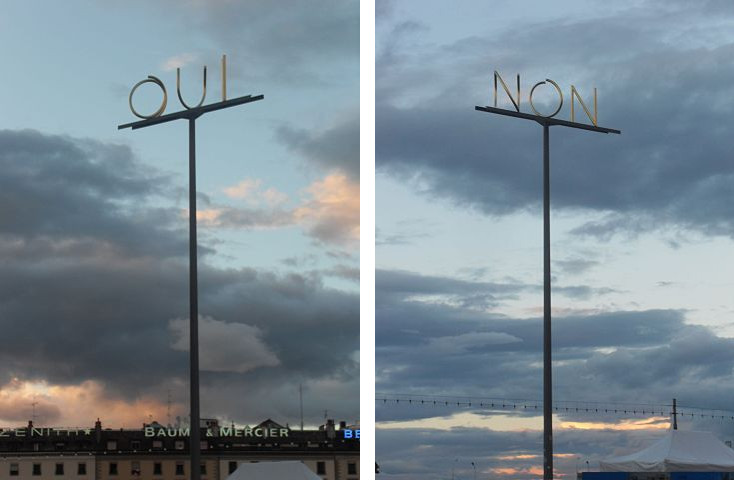 Artist Markus Raetz erected this sign on the Rue du Rhône (at Place de la Fusterie) in downtown Geneva. What it says depends on where you stand.

Here’s a similar idea exhibited in a gallery:

“I was tossing around the names of various wars in which both the opponents appear: Spanish-American, Franco-Prussian, Sino-English, Russo-Japanese, Arab-Israeli, Judeo-Roman, Anglo-Norman, and Greco-Roman. Is it a quirk of historians or merely a coincidence that the opponent named first was always the loser? It would appear that a country about to embark on war would do well to see that the war is named before the fighting starts, with the enemy named first!” — David L. Silverman