Vernet relates, that he was once employed to paint a landscape, with a cave, and St. Jerome in it; he accordingly painted the landscape, with St. Jerome at the entrance of the cave. When he delivered the picture, the purchaser, who understood nothing of perspective, said, ‘the landscape and the cave are well made, but St. Jerome is not in the cave.’ ‘I understand you, Sir,’ replied Vernet, ‘I will alter it.’ He therefore took the painting and made the shade darker, so that the saint seemed to sit farther in. The gentleman took the painting; but it again appeared to him that the saint was not in the cave. Vernet then wiped out the figure, and gave it to the gentleman, who seemed perfectly satisfied. Whenever he saw strangers to whom he shewed the picture, he said, ‘Here you see a picture by Vernet, with St. Jerome in the cave.’ ‘But we cannot see the saint,’ replied the visitors. ‘Excuse me, gentlemen,’ answered the possessor, ‘he is there; for I have seen him standing at the entrance, and afterwards farther back; and am therefore quite sure that he is in it.’ 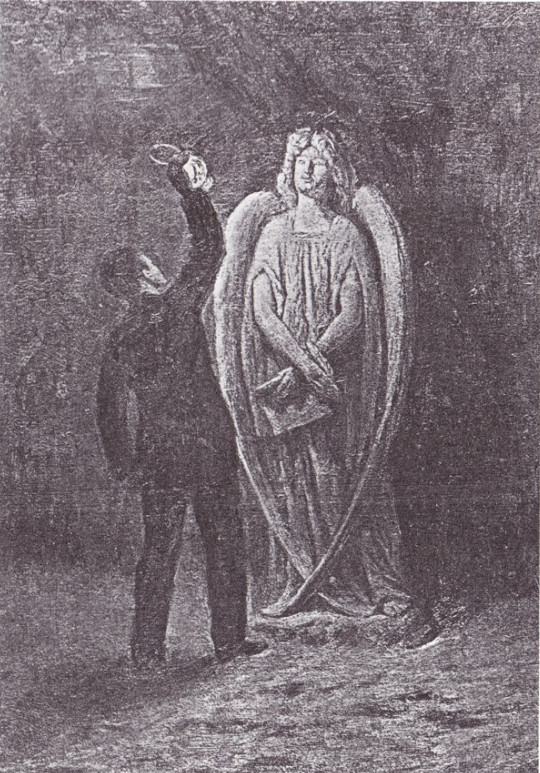 The residents of Brattleboro, Vt., awoke to a surprise on New Year’s Day 1856: An angel of snow stood at the corner of Linden and North Main streets, holding a pen and notebook as if ready to record the events of the new year.

The artist turned out to be 21-year-old Larkin Goldsmith Mead Jr., the son of a local lawyer. He had worked through the night to fashion the eight-foot figure by lantern light, shaping it by hand from snow brought to him by two friends. He sculpted some parts separately in order to mold them more easily, attaching them later with wet snow, and he poured water over the finished creation to give it a smooth finish. The Vermont Phoenix marveled:

The inhabitants of the village discovered ‘The Snow Angel,’ in the prismatic glow of the morning sun’s reflection. The early risers and pedestrians about town were amazed, when they drew near, to see what appeared at a distance like a school-boy’s work turned to a statue of such exquisite contour and grace of form. … The passing school-boy was awed for once, as he viewed the result of adept handling of the elements with which he was so roughly familiar, and the thought of snowballing so beautiful an object could never have dwelt in his mind. It is related that the village simpleton was frightened and ran away, and one eccentric citizen, who rarely deigned to bow to his fellow men, or women either, lifted his hat in respect after he had gazed a moment upon Mead’s work.

The angel was featured in newspapers in Boston and New York, and it brought Mead commissions for more lasting works, including a statue of Ethan Allen and a wooden figure symbolizing agriculture for the Montpelier statehouse. His later projects include Lincoln’s tomb in Springfield, Illinois.

In 1886 he reproduced the angel in marble — it stands in the public library in Brattleboro. Across the street, commemorating the site of the original angel, stands a drinking fountain designed by his brother, architect William Mead — who immortalized the family name in his own way.

Classical statues tend to lose their noses, and in the 19th century museums would commonly replace them with “restoration” noses, to preserve the appearance of the original sculpture.

In the 20th century some museums changed philosophies and “de-restored” their collections, thinking it better to present each piece in its authentic state.

This created a superfluity of noses, and some museums collect these into displays of their own. Charmingly, there’s even a word for this: A collection of noses is a Nasothek.

Above is the collection in the Ny Carlsberg Glyptotek museum in Copenhagen.

You know the singularity has arrived when the robots start playing marimbas. Shimon, engineer Guy Hoffman’s robot musician, doesn’t play programmed music — it improvises in ensembles with human players, communicating with a “socially expressive head” and favoring musical ideas that are unlikely to be chosen by humans, so as to lead the performance in genuinely novel directions.

Heather Ackroyd and Dan Harvey make photographs using grass. When grass is grown from seed on a vertical surface, it can record complex images much as photographic film does: Each germinating blade produces chlorophyll in proportion to the light that reaches it. Stronger light produces greener grass, and blades deprived of light grow but produce no chlorophyll, leaving them yellow. “In a sense we have adapted the photographic art of producing pictures on a sensitive film to the light sensitivity of emergent blades of young grass; the equivalent tonal range of black-and-white photographic paper is created within the grass in shades of yellow and green.”

“A grass photograph has the power to elicit strong emotional responses in the viewer, and it is undeniable that the beauty of the freshly grown grass canvas suggests all that is fertile and life-enhancing. Our desire to alleviate the process of decay has encouraged us to journey into the world of science and genetics, and has opened our work to a greater number of people throughout the world.”

When critics dismissed his paintings, Dutch artist Han van Meegeren decided to seek his revenge on the art world: He devoted himself to forgery and spent six years fabricating a Vermeer masterpiece. In this week’s episode of the Futility Closet podcast, we’ll recount the career of a master forger and the surprising mistake that eventually brought him down.

We’ll also drop in on D.B. Cooper and puzzle over an eyeless fruit burglar.

END_OF_DOCUMENT_TOKEN_TO_BE_REPLACED 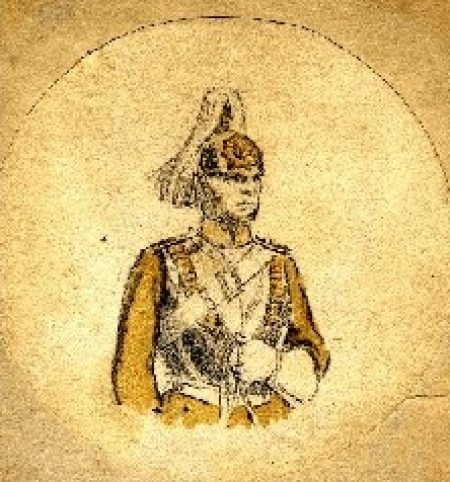 Alexander Fleming, the discoverer of pencillin, grew “germ paintings” of living bacteria on blotting paper. He made this 4-inch portrait, titled “Guardsman,” in 1933.

“If a paper disc is placed on the surface of an agar plate, the nutrient material diffuses through the paper sufficiently to maintain the growth of many microorganisms implanted on the surface of the paper,” he wrote. “At any stage, growth can be stopped by the introduction of formalin. Finally the paper disc, with the culture on its surface, can be removed, dried, and suitably mounted.”

Here’s a gallery. “Even in Fleming’s time this technique failed to receive much attention or approval. Apparently he prepared a small exhibit of bacterial art for a royal visit to St Mary’s by Queen Mary. The Queen was ‘not amused and hurried past it’ even though it included a patriotic rendition of the Union Jack in bacteria.” 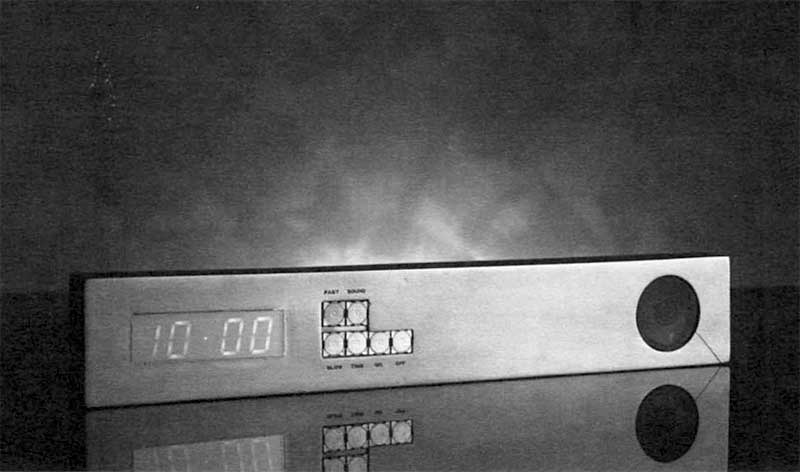 In 1979, artist Max Neuhaus proposed a silent alarm clock. Or, rather, a clock that awakens one with silence:

Instead of a bell which begins with a sudden clang and gradually dies away, this concept is precisely the opposite. The sound is introduced gradually; beginning inaudibly it grows slowly over a period of minutes and, at its height, suddenly disappears. The long subtle emergence of the sound causes it to go unnoticed. It becomes apparent only at the instant of its disappearance, creating a sense of silence.

The change would awaken you. It’s not even really silence that you’d hear — the normal background sounds would still be there. But “in this silent moment, for a few seconds after the sound has gone, a subtle transparent aural afterimage is superimposed on the everyday sounds of the environment, a spontaneous aural memory or reconstruction perhaps, shared by all who notice it, engendered by the sound’s disappearance.”

Most piano music is written with the melody in the right hand, which seems unfair to left-handers. In 1998 left-handed Chris Seed determined to do something about it: He remortgaged his house and spent £28,000 on a “reversed” instrument built by Dutch fortepiano makers Poletti and Tuinman.

“At first Seed found it far harder to learn to play the instrument than he’d expected,” reports Rik Smits in The Puzzle of Left-Handedness. “It seemed as if he’d have to begin learning again from scratch. But once he got going, Seed’s brain turned out to be perfectly capable of converting everything he’d ever learned into a left-handed playing technique. Exactly what he’d hoped happened: all the pieces of the puzzle fell into place more or less automatically. Seed became at least as good a pianist as he was on a conventional piano and eventually he felt real delight in playing ‘as God intended.'”

Seed told the BBC, “The piano has transformed my playing, and I hope it will set a precedent for a future of left-handed pianists and uncover a whole new wealth of talent in the world of music.”

The Italian Futurist painter Luigi Russolo had no training as a composer, but in 1913 he argued that music had become “a fantastic world superimposed on the real one,” a collection of “gentle harmonies” that pursued “purity, limpidity and sweetness of sound” but had nothing to do with the real world.

He proposed that “this limited circle of pure sounds must be broken, and the infinite variety of ‘noise-sound’ conquered.” “We find far more enjoyment in the combination of the noises of trams, backfiring motors, carriages and bawling crowds than in rehearing, for example, the ‘Eroica’ or the ‘Pastoral’.”

Accordingly he invented a new set of experimental instruments, the intonarumori, or “noise makers.” There were 27 varieties, all acoustic. Typically a performer turned a handle that rattled or bowed a set of strings, and the surrounding box and horn amplified the sound.

When Russolo and Filippo Tommaso Marinetti debuted their “noise orchestra” in April 1914, it caused a riot, but Russolo was undisturbed. “I am not a musician,” he wrote. “I have therefore no acoustical predilections, nor any works to defend.”