Italian Futurist Renato Bertelli produced this “Continuous Profile of Mussolini” in 1933, eight years after its subject became dictator of Italy. Surprisingly, Mussolini approved it as an official portrait. Not only did it present him as a cultural pioneer, he thought, but it appealed to his respect for Roman traditions: Where Janus had two faces, to look into the past and the future, Il Duce’s had an infinite number, to see in all directions.

The Tree of 40 Fruit

In 2008, Syracuse University art professor Sam Van Aken acquired the three-acre orchard at the New York State Agricultural Experiment Station, which was closing due to funding cuts. Over the next five years he grafted together buds from 250 varieties grown there, creating in the end a single tree with 40 different branches, each bearing a different kind of fruit, including almonds, apricots, cherries, nectarines, peaches, and plums. He’s since gone on to produce 16 such trees.

“I’ve been told by people that have [a tree] at their home that it provides the perfect amount and perfect variety of fruit,” he said. “So rather than having one variety that produces more than you know what to do with, it provides good amounts of each of the 40 varieties. Since all of these fruit ripen at different times, from July through October, you also aren’t inundated.”

Oh, and they also bloom in pink, crimson and white in the spring. Here’s Van Aken’s website. 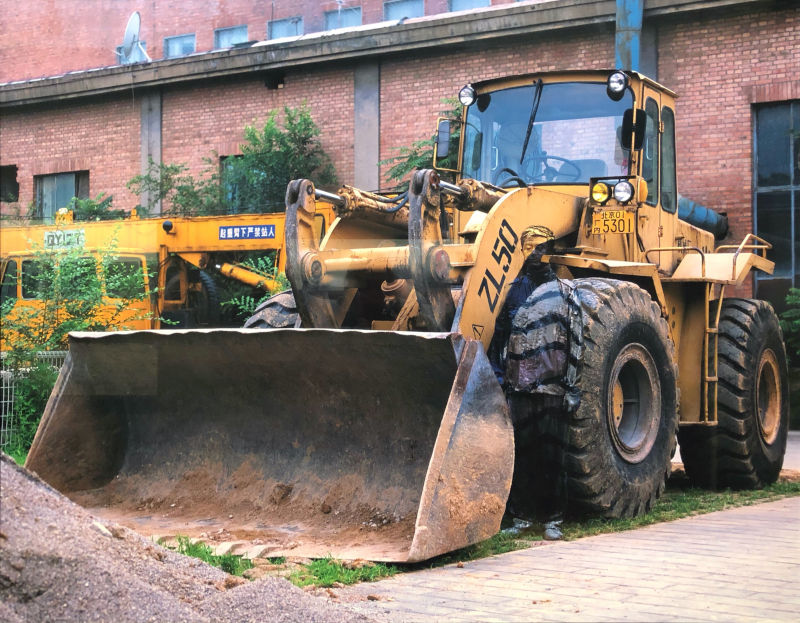 Chinese artist Liu Bolin is hiding in this photograph. Can you find him? 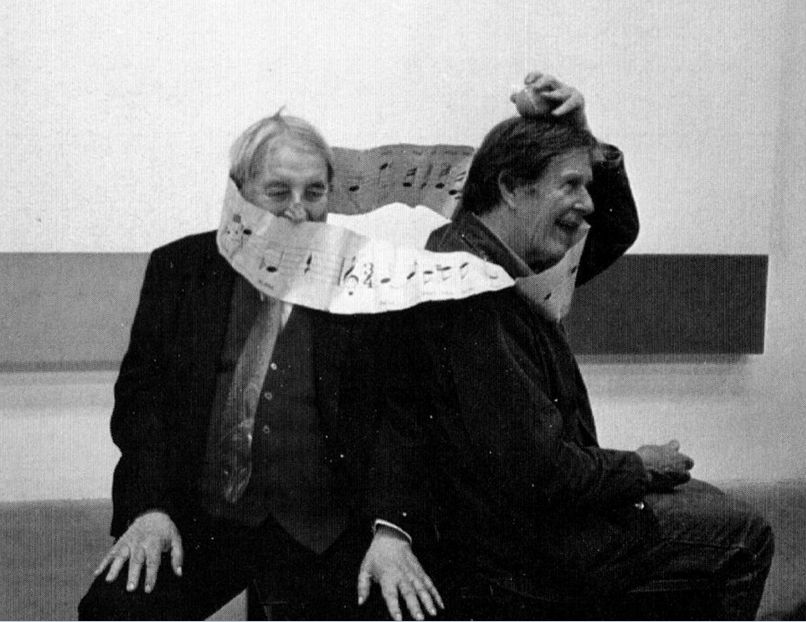 Conductor and musical lexicographer Nicolas Slonimsky composed a “Möbius Strip Tease” in 1965, while he was teaching at UCLA. The text reads:

Slonimsky described the piece as “a unilateral perpetual rondo in a linearly dodecaphonic vertically consonant counterpoint.” The instructions on the score read: “Copy the music for each performer on a strip of 110-b card stock, 68″ by 6″. Give the strip a half twist to turn it into a Möbius strip.” In performance the endless score rotates perpetually around each musician’s head. (That’s Slonimsky above, trying it out with John Cage.)

The score is here if you’d like to try it yourself. Be careful. 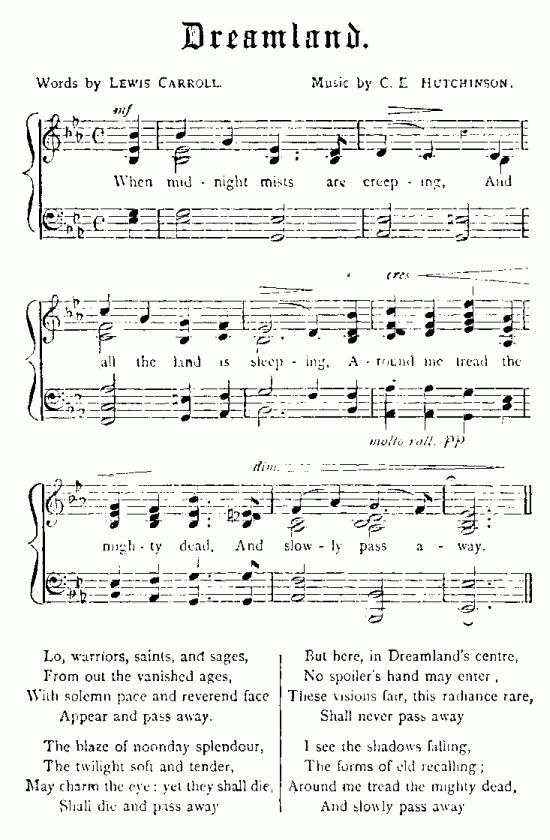 Here’s an oddity: In 1882 Lewis Carroll collaborated on a song with the dreaming imagination of his friend the Rev. C.E. Hutchinson of Chichester. Hutchinson had told Carroll of a strange dream he’d had:

I found myself seated, with many others, in darkness, in a large amphitheatre. Deep stillness prevailed. A kind of hushed expectancy was upon us. We sat awaiting I know not what. Before us hung a vast and dark curtain, and between it and us was a kind of stage. Suddenly an intense wish seized me to look upon the forms of some of the heroes of past days. I cannot say whom in particular I longed to behold, but, even as I wished, a faint light flickered over the stage, and I was aware of a silent procession of figures moving from right to left across the platform in front of me. As each figure approached the left-hand corner it turned and gazed at me, and I knew (by what means I cannot say) its name. One only I recall — Saint George; the light shone with a peculiar blueish lustre on his shield and helmet as he turned and slowly faced me. The figures were shadowy, and floated like mist before me; as each one disappeared an invisible choir behind the curtain sang the ‘Dream music.’ I awoke with the melody ringing in my ears, and the words of the last line complete — ‘I see the shadows falling, and slowly pass away.’ The rest I could not recall.

He played the melody for Carroll, who wrote a suitable lyric of five verses. Hutchinson disclaimed writing the music, but if he didn’t … who did?

(From Stuart Dodgson Collingwood, Life and Letters of Lewis Carroll, 1898.) 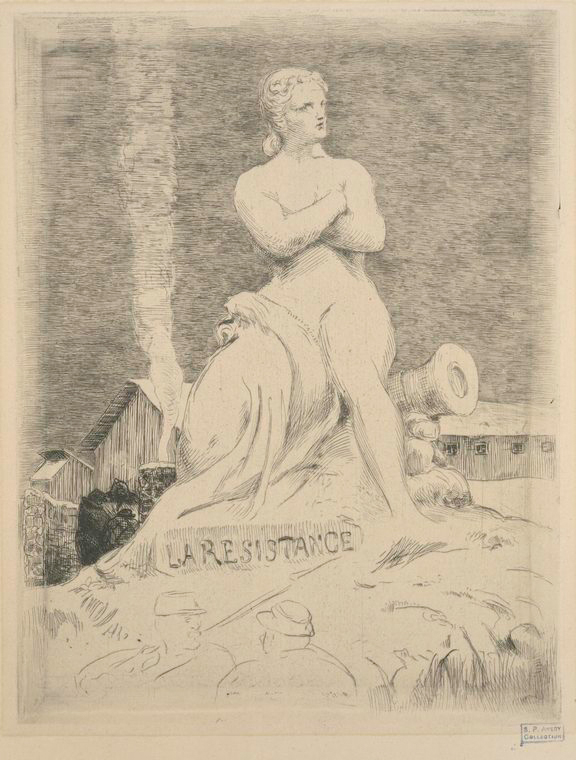 During a lull in the Prussian attack on Paris in December 1870, the Seventh Company of the French National Guard spent a few hours building a “museum” of snow on the southern edge of the city. Among them was 29-year-old sculptor Alexandre Falguière, who spent three hours crafting La Statue de la Résistance, a nine-foot emblem of French resistance in the form of a defiant woman atop a cannon. Félix Philippoteaux sketched the snow woman, Théophile Gautier wrote an essay, Théodore de Banville published a poem, Félix Bracquemond made an etching, and Faustin Betbeder produced a series of lithographs, but none of these captured the essence of the original. Falguière promised to make a permanent version in plaster or marble, but it never appeared. Critic H. Galli wrote in L’Art français in 1895:

As soon as Falguière was back in his studio, he took up his modeling knife, but he sought, worked, and suffered in vain. None of his maquettes had the proud allure, the poetry of his snow statue; he destroyed them. The capitulation, the dismemberment of France, and then the awful civil war had, alas, dissipated his last hopes. The inspiration was dead.

“Recapturing that magic would prove to be impossible for the unflagging Falguière,” writes Bob Eckstein in The History of the Snowman. “Eventually he created many variations in wax, plaster, terra cotta, and bronze, ranging in size from two to four feet high, all less successful than the original snow sculpture. Falguière could never duplicate the spontaneity and urgency of that long-gone snow woman. That moment had passed and had melted along with his original masterpiece.” 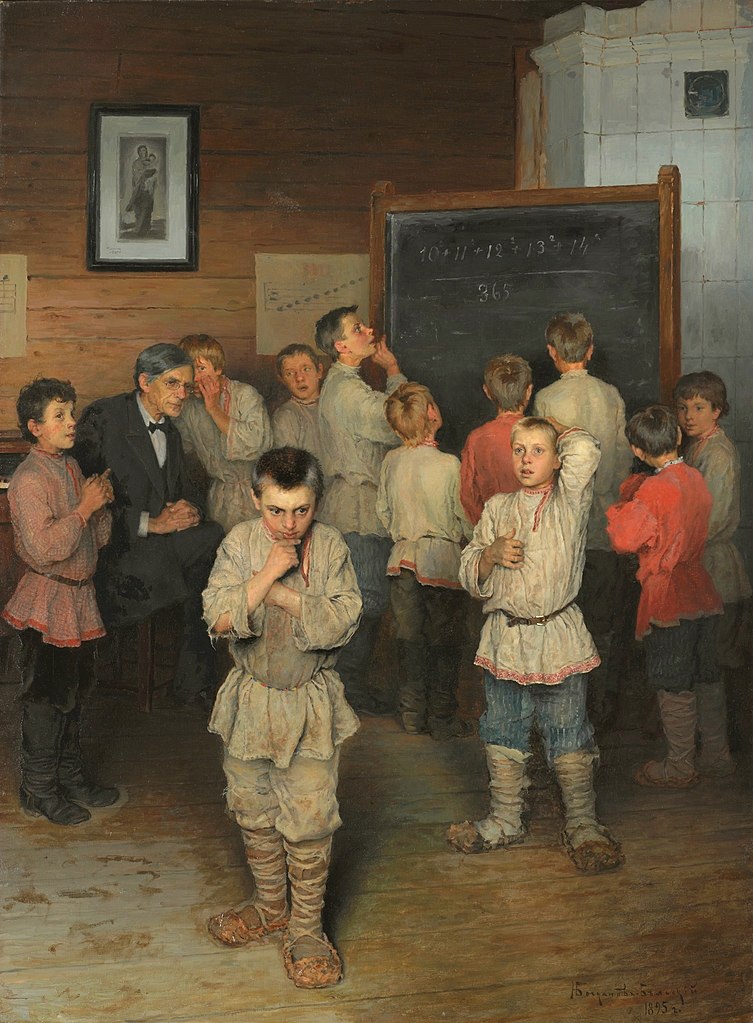 The boys in Nikolay Bogdanov-Belsky’s 1895 painting Mental Arithmetic are having a difficult time solving the problem on the board:

Charging Bull, the bronze sculpture that’s become a ubiquitous symbol of Wall Street, was not commissioned by New York City or anyone in the financial district. Artist Arturo Di Modica spent $360,000 to create the three-ton statue, trucked it to Lower Manhattan, and on Dec. 15, 1989, left it in front of the New York Stock Exchange as a Christmas gift to the people of New York. Police impounded it, but after a public outcry the city decided to install it two blocks south of the exchange.

Since New York doesn’t own it, technically it has only a temporary permit to remain on city property. But after 32 years, it appears to have become a permanent fixture. 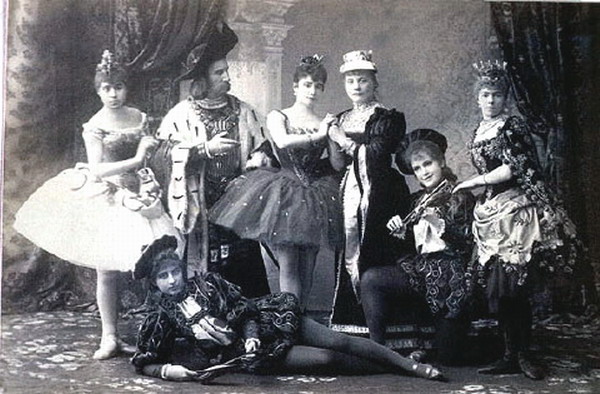 Here’s a lost art: The tableau vivant, or “living picture,” was a form of popular entertainment in which the actors took up poses but did not speak or move. (This one presents the original cast of Tchaikovsky’s ballet The Sleeping Beauty.)

In our era of ubiquitous video it’s hard to remember how important this was — it formed a sort of living bridge between painting and the stage, representing dramatic moments in three dimensions that could be studied and admired as part of the real world. Sometimes stories were told through a series of connected tableaux, a technique that would lead eventually to modern storyboards and comic strips.