The Treaty of Versailles contained an odd provision: It established a standard pitch to which orchestras could tune. For hundreds of years the agreed pitch might vary widely from one region to the next. When it became clear that the average pitch was rising over time, a French commission settled that the standard pitch for the A above middle C would be 435 hertz, and an 1885 convention of European nations adopted that as an international standard. The Treaty of Versailles in 1919 ratified that decision.

It would change again with time and technology. In the 20th century American musicians came to prefer 440 hertz, and that came to be adopted as the new standard. Today the standard tuning frequency is set by the International Organization for Standardization: ISO 16 “specifies the frequency for the note A in the treble stave and shall be 440 hertz.” 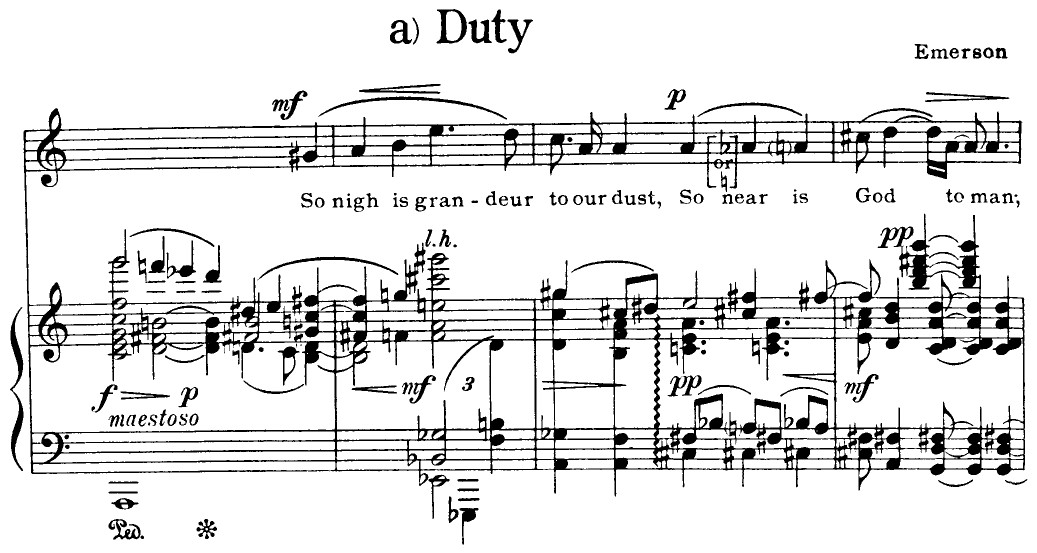 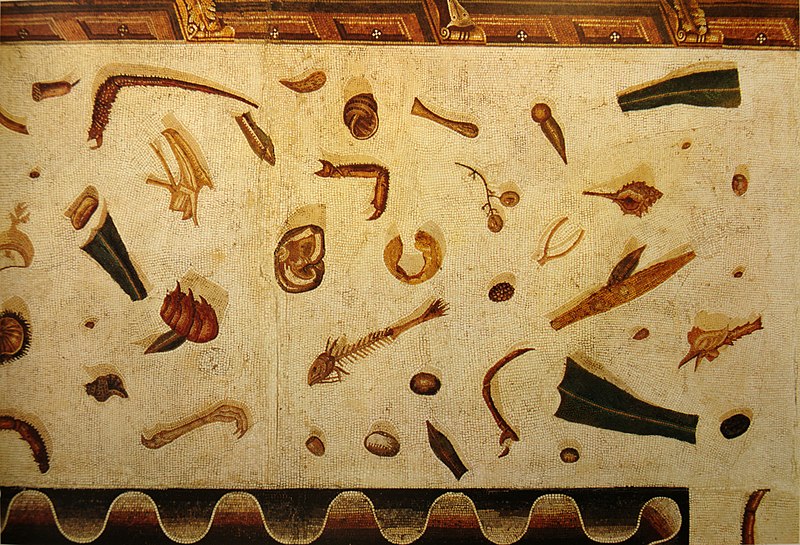 Perhaps inspired by his interest in natural science, American painter Charles Willson Peale set out to make his 1795 Staircase Group as realistic as possible. Not only did he paint his two sons in perfect detail on a full-length canvas, but he installed the finished painting in a door frame in his studio, with a real step at the bottom that seemed to merge into the staircase he’d painted.

Rembrandt Peale, another son, recalled that George Washington tipped his hat to the young men as he walked by.

A Company of Soldiers

During World War II, British thespian Maurice Evans toured the Central Pacific with a stripped-down version of Hamlet in which all the male actors were G.I.s. He cut down and sped up the text so that the play ran in 2 hours and 45 minutes, so that the men could return to their quarters on time.

“As I remember, on opening night, Hamlet seemed like a flop,” recalled one participant. “There was barely a murmur of response from the house and a fair amount of gloom backstage. We were later told that the audience had been reminded that this was not some cheap skin show but a classic, and that they were to show respect for Shakespeare and for Hamlet, who happened to be, by God, an officer in the United States Army. With this misunderstanding cleared up, future audiences were much more enthusiastic.”

In fact the “G.I. Hamlet” proved so successful that when the war was over Evans moved it to New York and then toured the country. He didn’t mean to be typed as a Shakespearean actor, he said; he just wanted audiences to enjoy the plays as “rattling good shows.” 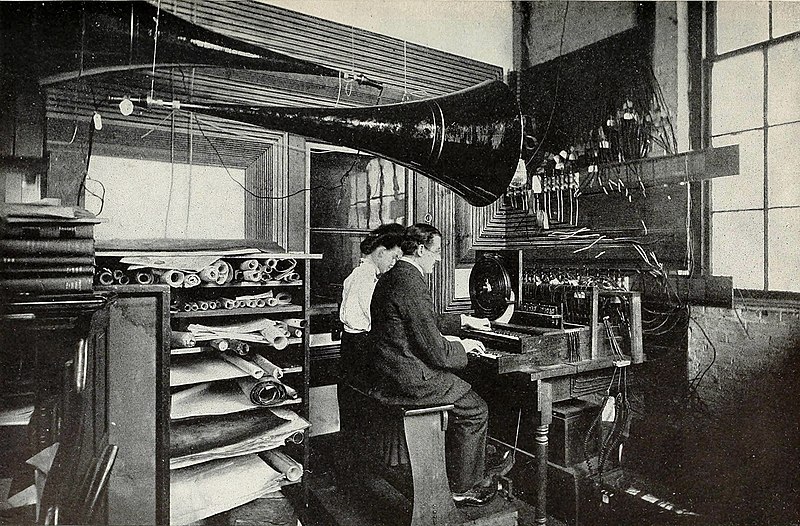 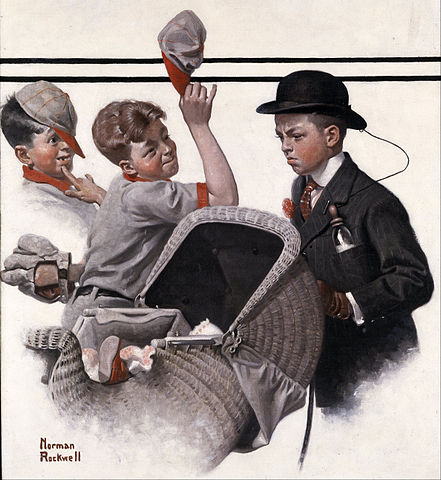 In 1916, when Norman Rockwell began his career painting covers for the Saturday Evening Post, he faced a “recurring crisis” in coming up with new ideas. “I’d feel all washed out, blank, nothing in my head but a low buzzing noise,” he wrote in his 1960 autobiography, My Adventures as an Illustrator. “One day, after I’d been aimlessly sketching and crumpling up sheets of paper for hours, I said to myself, This has got to stop; I can’t sit here and muse all day. So I figured out a system and used it for 20 years or so.”

When I had run out of ideas, I’d eat a light meal, sharpen 20 pencils, and lay out a dozen pads of paper on the dining room table. Then I’d draw a lamppost (after a while I got to be the best lamppost artist in America). Then I’d draw a drunken sailor leaning on the lamppost. I’d think about the sailor. Did his girl marry someone else while he was at sea? He’s stranded in a foreign port without money? No. I’d think of the sailor patching his clothes on shipboard. That would remind me of a mother darning her little boy’s pants. Well, what did she find in the pocket? A top. A knife handle. A turtle — I’d sketch a turtle slouching slowly along to —

He would spend three or four hours following this random train of thought while drawings piled up on the floor; then he’d go to bed miserable and desperate. The next morning, still desperate, “I’d kick my trash bucket and suddenly, as it rolled bumpety-bump across the floor, an idea would come to me like a flash of lightning.” He’d follow up this new idea, and once he understood enough about the scene, he removed the lamppost.

“I’d given my brain such a beating the night before that it was in a sensitive state,” he explained. “Pretty soon I’d have a Post cover.”

The dome in Vienna’s Jesuit Church isn’t there — artist Andrea Pozzo painted the ceiling of the nave in 1703 to create a convincing illusion when viewed from the right angle.

A stone slab in the floor indicates the ideal spot from which to view it.

Financial publisher Gilbert Kaplan fell so in love with Mahler’s second symphony that he bought the manuscript, paid musicians to teach him to conduct it, rented Avery Fisher Hall, and led the American Symphony and the Westminster Symphonic Choir through a performance of his own in 1982.

The orchestra had requested that no reviews be published, but the Village Voice published one anyway — and it was favorable. So Kaplan conducted the symphony another 100 times throughout his life and recorded it twice, with the London Symphony Orchestra and the Vienna Philharmonic. Opinions were mixed, but he did receive some discerning praise. Of a 2008 performance with the New York Philharmonic, Steve Smith wrote in the New York Times:

That Mr. Kaplan is no professional conductor was immediately apparent. Square-shouldered and stiff, he indulged in no flamboyant gymnastics. He conducted from memory, beating time proficiently and providing cues as needed. Only in a few passages, like the pages of heavenly bliss just before the first movement’s tempo-sostenuto conclusion, did a curl of the lip suggest that he was swept up in his work. His efforts were evident throughout a performance of sharp definition and shattering power. From the acute punch of the opening notes, every detail of this huge, complex score came through with unusual clarity and impeccable balance. Every gesture had purpose and impact, and the performance as a whole had an inexorable sweep. … It seems likely that no one is better equipped to reveal the impact of precisely what Mahler put on the page.

But trombonist David Finlayson called the same performance a “woefully sad farce,” and Kaplan wasn’t asked back. “I don’t think anyone will confuse me with Lorin Maazel when it comes to technique,” he said, “and I may need to speak more than somebody who is more skillful, like Lorin, but I do get the results I want, and I did get the results I wanted that night. If some people are displeased, I can’t help it.”