We want to line up our six children for a photograph, but we can’t put Sally and John next to one another because they fight. In how many ways can we arrange the photo with this constraint? 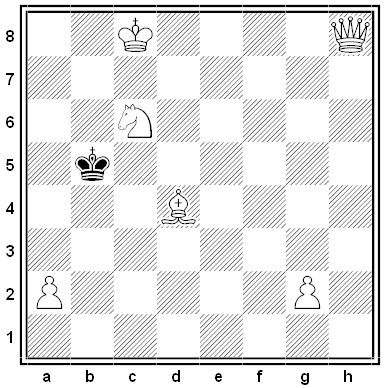 By N. Kossolapov. White to mate in two moves.

In deciding a plagiarism case against author Dan Brown in 2006, British justice Peter Smith handed down a peculiar judgment: Certain letters in the text had been italicized with no explanation. Apparently inspired by Brown’s book The Da Vinci Code, Smith had hidden a message in the text.

The judgment included the sentence “The key to solving the conundrum posed by this judgment is in reading HBHG and DVC.” In context, those abbreviations refer to The Holy Blood and the Holy Grail, the book that Brown had been accused of plagiarizing, and The Da Vinci Code.

“I can’t discuss the judgement, but I don’t see why a judgement should not be a matter of fun,” Smith had said in handing down the opinion, which found Brown not guilty. He promised to confirm any correct solution.

He offered enough hints to reporters that Guardian media journalist Daniel Tench eventually solved it: It was a polyalphabetic cipher using a keyword based on the Fibonacci sequence, yielding the plaintext “Jackie Fisher who are you? Dreadnought.” Jackie Fisher was a British admiral whom Smith admired. (The code is described here; Tench describes the solving here.)

The Court of Appeal later said that Smith “was prompted by the extensive use in [The Da Vinci Code] of codes, and no doubt by his own interest in such things, to incorporate a coded message in his judgment, on which nothing turns. The judgment is not easy to read or to understand. It might have been preferable for him to have allowed himself more time for the preparation, checking and revision of the judgment.”

Here are six new lateral thinking puzzles — play along with us as we try to untangle some perplexing situations using yes-or-no questions.

END_OF_DOCUMENT_TOKEN_TO_BE_REPLACED

A logic puzzle by MIT mathematician Tanya Khovanova: You’re visiting an island on which every resident is either a knight or a knave. Knights always tell the truth, and knaves always lie. All the islanders know one another. You meet three islanders, Alice, Bob, and Charlie, and ask each one, “Of the two other islanders here, how many are knights?” Alice says, “Zero.” Bob says, “One.” What will Charlie say?

King William’s College has released its annual General Knowledge Paper, “The World’s Most Difficult Quiz,” a school tradition since 1904. There are 18 sets of 10 questions, each set treating a particular theme; divining the themes is difficult and useful.

This year’s quiz bears the customary warning at the top: Scire ubi aliquid invenire possis ea demum maxima pars eruditionis est, “The greatest part of knowledge is knowing where to find something.” If past quizzes are any model, then search engines may lead you astray.

The answers will be on the school website at the end of January. Meanwhile MetaFilter is coordinating a spreadsheet of proposed answers (warning: spoilers). 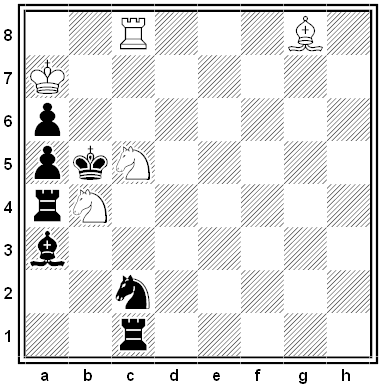 A prizewinning problem by Paul Bekkelund from the Norwegian chess magazine Sjakk-Nytt, 1947. White to mate in two moves.

A problem proposed by Ashay Burungale of Satara, Maharashtra, India, in the November 2008 issue of American Mathematical Monthly: In a certain town of population 2n + 1, all relations are reciprocal: If Person 1 knows Person 2, then Person 2 knows Person 1. For any set A that consists of n citizens, there’s some person among the remaining n + 1 who knows everyone in A. Prove that there’s some citizen of the town who knows all the others.

Each of three people is wearing either a red hat or a blue hat. Each can see the color of the others’ hats but not her own. Each is told to raise her hand if she sees a red hat on another player. The first to guess the color of her own hat correctly wins.

All three raise their hands. A few minutes pass in which no guesses are made, and then one player says “Red” and wins. How did she know the color of her hat? 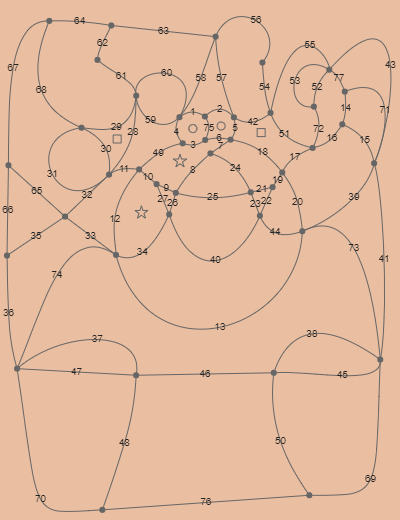 This year’s card contains nine mathematical puzzles. Finding the right answers will reveal a Christmas-themed picture in the image above.