English comedian Stanley Unwin invented his own language, “Basic Engly Twenty Fido,” a playfully twisted version of English that he said had been inspired by his mother, who once told him that she had “falolloped over” and “grazed her kneeclabbers.”

After that, he said, he became “a masterlode of the verbally thrips oratory.” Asked his opinion of Elvis Presley, he said, “Well, from across the herring-pole where harth the people has produced some waspwaist and swivel-hippy, I must say the rhythm contrapole sideways with the head and tippy tricky half fine on the strings.”

The Small Faces asked him to narrate the story of Happiness Stan on their 1968 album Ogdens’ Nut Gone Flake. He starts, “Are you all sitty comforty bolt two square on your botty? Then I’ll begin. Like all real-life experience story this also begins once upon a polly-ti-to. Now after little lapse of time Stan became deep hungry in his tumload. After all he struggly trickly half several mileode, and anyone would suffer under this.”

This might recall Lewis Carroll’s “Jabberwocky” or such fictional languages as Nadsat in Anthony Burgess’ A Clockwork Orange. The difference is that, for the most part, Unwin wasn’t preparing his utterances in advance but improvising them on the spot.

In 2002 he was laid to rest beside his wife, Frances, under an epitaph that read “Reunitey in the heavenly-bode – Deep Joy!” And his family arranged a thanksgiving service with a valediction in his own style: “Goodly byelode loyal peeploders! Now all gatherymost to amuse it and have a tilty elbow or a nice cuffle-oteedee — oh yes!” 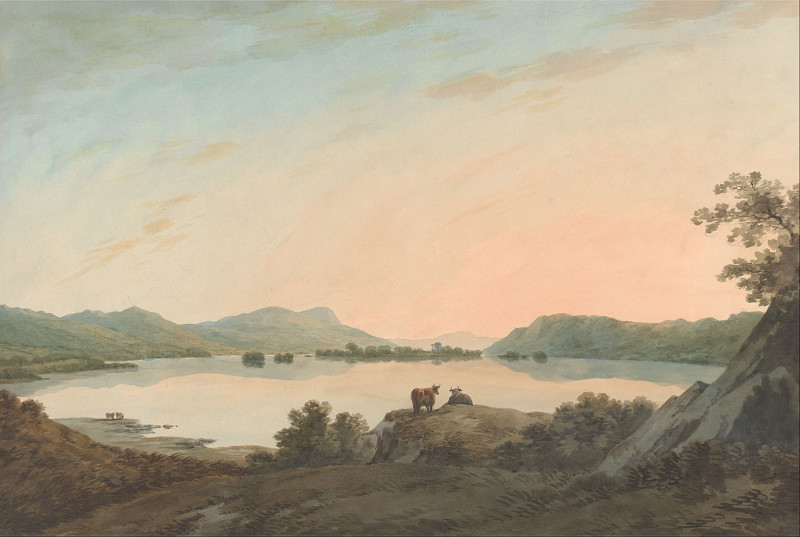 hydronym
n. the name of a river, lake, sea, or any other body of water

A bizarre exchange from E.S. Turner’s 2012 What the Butler Saw, a social history of servants in English society:

Vain young gentlemen had a way of summoning their valets to answer questions to which they well knew the answer. [Beau] Brummell, when asked by a bore which of the Lakes he liked best, rang for Robinson. ‘Which of the lakes do I admire most, Robinson?’ he asked; and was informed, ‘Windermere, sir.’ ‘Ah, yes, Windermere, so it is. Thank you, Robinson.’

What’s unusual about this passage from Great Expectations?

It is not much to the purpose whether a gate in that garden wall which I had scrambled up to peep over on the last occasion was, on that last occasion, open or shut. Enough that I saw no gate then, and that I saw one now. As it stood open, and as I knew that Estella had let the visitors out,– for she had returned with the keys in her hand,– I strolled into the garden, and strolled all over it.

It contains a string of 15 letters that reads the same forward and backward:

It is not much to the purpose whether a gate in that garden wall which I had scrambled up to peep over on the last occasion was, on that last occasion, open or shut. Enough that I saw no gate then, and that I saw one now. As it stood open, and as I knew that Estella had let the visitors out,– for she had returned with the keys in her hand,– I strolled into the garden, and strolled all over it.

Reader Eric Harshbarger has been searching for such strings in literary texts. Here are his finds, and here’s a nifty tool he made that will find the longest palindromic substring in a given passage.

12/11/2021 UPDATE: Eric wonders what’s the longest sensible text one might construct that doesn’t contain any such substrings (an example: “We view uncopyrightable material on Wednesdays”). Add your ideas here. 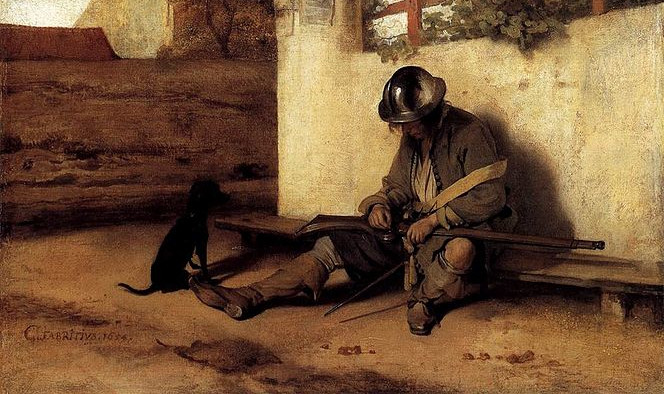 nutation
n. the action of nodding, esp. as a sign of drowsiness 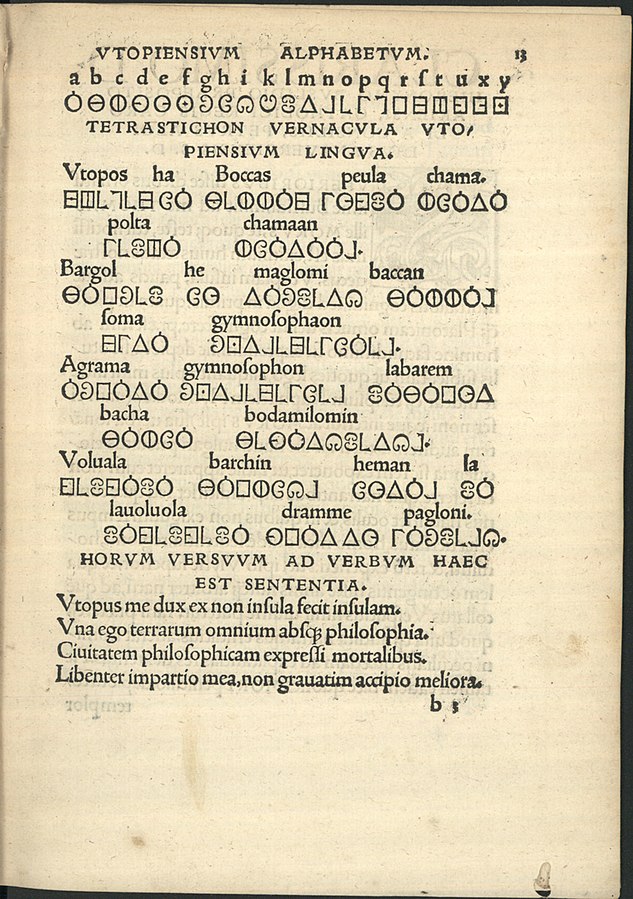 Thomas More’s Utopia gives us not only a description of that imaginary land but the actual alphabet used there: More’s friend Peter Giles wrote an addendum to the book that presents the letters and gives an example of the Utopian writing system:

This is translated into Latin as

And in English this becomes

The commander Utopus made me into an island out of a non-island.
I alone of all nations, without philosophy,
Have portrayed for mortals the philosophical city.
Freely I impart my benefits; not unwillingly I accept whatever is better.

Working backward, this makes it possible to divine the meaning of a few Utopian words: boccas is commander, chama is island, voluala is willingly, and gymnosophaon is philosophy. You couldn’t really talk about much beyond perfect societies, but maybe that’s the point.

George Bernard Shaw argued passionately for the reform of English spelling, which he found bewildering and inconsistent. When opponents objected that imposing changes would be too disruptive, he suggested that we might alter or delete just one letter per year, to give the reading public time to adapt. In 1971 writer M.J. Shields sent a letter to the Economist imagining the consequences:

For example, in Year 1, that useless letter ‘c’ would be dropped to be replased by either ‘k’ or ‘s’, and likewise ‘x’ would no longer be part of the alphabet. The only kase in which ‘c’ would be retained would be in the ‘ch’ formation, which will be dealt with later. Year 2 might well reform ‘w’ spelling, so that ‘which’ and ‘one’ would take the same konsonant, wile Year 3 might well abolish ‘y’, replasing it with ‘i’, and Iear 4 might fiks the ‘g/j’ anomali wonse and for all.

Semiotician Charles K. Bliss was born in Czernowitz, in Austria-Hungary, a city with a confluence of nationalities that “hated each other, mainly because they spoke and thought in different languages.” So Bliss invented a new language to encourage communication between speakers of different languages — “Blissymbols” were ideographic, meaning they conveyed ideas or concepts, and so were not beholden to any spoken language.

For example, the sentence above reads “I want to go to the cinema”:

The language never fulfilled its potential as a bridge among cultures, but it became popular in the 1970s in teaching disabled people to communicate, and an organization known as Blissymbolics Communication International oversees its applications around the world.

bafflegab
n. official or professional jargon which confuses more than it clarifies; gobbledegook

This is such a useful word that its coiner actually received an award. Milton A. Smith, assistant general counsel for the American Chamber of Commerce, invented it to describe one of the incomprehensible price orders published by the Chamber’s Office of Price Stabilization. His comment, published in the Chamber’s weekly publication Washington Report in January 1952, was lauded in an editorial in the Bellingham [Wash.] Herald, which sponsored a plaque.

At the award presentation, he was asked to define his word briefly. He answered, “Multiloquence characterized by consummate interfusion of circumlocution or periphrasis, inscrutability, and other familiar manifestations of abstruse expatiation commonly utilized for promulgations implementing Procrustean determinations by governmental bodies.”

Are you next?: Do you understand? Be wise
Crushing the jungle: Escaping from prison
Cracking the jug: Forcing an entrance into a bank
Busting the tag on a rattler: Breaking the seal on a freight car
Busting the bulls at the big show: Fighting with the police at the circus
Banging supers at the red wagon: Stealing watches at the ticket wagon
Hoisting a slab of stones: Stealing a tray of diamonds
He got whipped back to the Irish club house: He was remanded to the police station
Hitting the pipe at a hop-joint: Smoking opium in an opium joint
He busted the collar’s smeller: He broke the officer’s nose
The stall got his slats kicked in: The thief had his ribs broken
The gun slammed a rod to his nut: The thief put a pistol to his head
He pigged with the darb: He absconded with the money
The yeg men blew the gopher: The safe crackers forced open the doors of the safe with explosives

I went to the coast with a mob of paper-layers, but graft was on the fritzer. I blew out and rung in with a couple of penny-weighters. A Tommy and his papa. Everything was rosy, the cush was coming strong and I was patting this ginny on the hump, but I was a sooner. The Tommy got a swelled head and we split for all. I did the grand to Chicago and filled in with a yeg mob. We got a country jug on our first touch, but the box wasn’t heavy enough for five. They had a plant further on. But we had to wait till one of the mob went for some soup; as I had plenty of the darb I blew away and beat it back to Chic, and framed in with a couple of guns who were working east on the rattlers. We got the stuff all right. Well, I’m off to the joint to smoke up, so-so.

“I went to California with others to pass worthless checks. There wasn’t any money in it, so I left them and went with two expert thieves who make it a practice to rob jewelers, a woman and her lover. Everything looked bright. I was obtaining money easily and I was congratulating myself on my good fortune, but I was too hasty. This woman got independent and we parted for good. I purchased a first-class ticket to Chicago and met a gang of safe burglars whom I joined. Our first theft was the burglary of a safe in a suburban bank. The amount of money obtained was insufficient to repay five men for their trouble. They had in view another place to rob, but we had to wait while one of the men went for some nitroglycerine. As I had plenty of money, I parted from them and returned to Chicago. There I met two pickpockets who were going east on the cars with the intention of plying their trade. We stole a lot of money. And now I’m off to the opium den to smoke some opium. Good-by.”

luition
n. payment of a ransom

quomodocunquizing
adj. that makes money in any possible way