In June 1829, English curate Patrick Brontë brought home a box of 12 wooden toy soldiers for his 12-year-old son Branwell. Branwell shared them with his sisters: “This is the Duke of Wellington! It shall be mine!” shouted 13-year-old Charlotte, and 11-year-old Emily and 9-year-old Anne soon took up avatars of their own. This was the start of an enormous imaginative undertaking — soon the four had invented names and personalities for their soldiers and had begun inventing a shared history in which the “Young Men” traveled to the west coast of Africa; settled there after a war with the indigenous Ashantee; elected Arthur Wellesley, the Duke of Wellington, as their leader; and founded the Great Glass Town at the delta of the River Niger.

This was just the beginning. After 1831 Emily and Ann “seceded” to create a related imaginary country they called Gondal, and after 1834 Charlotte and Branwell developed Glass Town into Angria, yet another imaginary nation. Together and variously they edited magazines, wrote histories, and composed stories, poems, and plays about these shared fantasy world, with alliances, feuds, and love affairs that play out across Africa and the Pacific. Here’s the start of “A Day at Parry’s Place,” written by 14-year-old Charlotte in a fanciful magazine in 1830:

‘Oh, Arthur!’ said I, one morning last May. ‘How dull this Glass Town is! I am positively dying of ennui. Can you suggest anything likely to relieve my disconsolate situation?’

‘Indeed, Charles, I should think you might find some pleasant employment in reading or conversing with those that are wiser than yourself. Surely you are not to emty-headed & brainless as to be driven to the extremity of not knowing what to do!’ Such was the reply to my civil question, uttered with the prettiest air of gravity imaginable.

‘Oh, yes! I am, brother! So you must furnish me with some amusement.’

‘Well, then, Charles, you have often spoken of a visit to Captain Parry’s Palace as a thing to be desired. You have now time for the accomplishment of your wish.’

Together, four young siblings in a quiet parsonage in Haworth filled 484 pages documenting their imaginary world before maturity sent them on to other pursuits. “As the sisters grew older, Anne — once as close as a twin — gradually ceased to share Emily’s personal vision of the saga, just as the partnership between Charlotte and Branwell slowly disintegrated as their interests and aesthetic vision changed with maturity,” writes Christine Alexander in Tales of Glass Town, Angria, and Gondal (2010). “[But] the young Brontës nourished each other’s imaginations and developed in their youthful writings the independent styles and themes that can be seen fully developed in their mature poetry and famous novels.”

Aristotle referred to humans as the “state-building animal.” Other names our species has proposed for itself, in various writings:

Wikipedia lists 72 of these. Douglas Adams wrote, “Human beings, who are almost unique in having the ability to learn from the experience of others, are also remarkable for their apparent disinclination to do so.”

There’s something beautifully useless about this: The gardens at Rousham House, in Oxfordshire, occupy only 25 acres, so landscape architect William Kent added a sham ruin on the brow of a distant hill to give the impression that the house’s landscape extended far beyond its boundaries.

Horace Walpole wrote that Kent “felt the delicious contrast of hill and valley changing imperceptibly into each other, tasted the beauty of the gentle swell, or concave scoop, and remarked how loose groves crowned an easy eminence with happy ornament, and while they called in the distant view between their graceful stems, removed and extended the perspective by delusive comparison.” 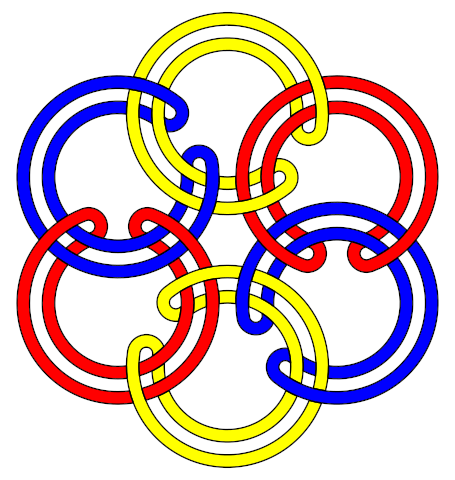 This arrangement of rubber bands is “Brunnian”: Though the bands are entangled, no two are directly linked; and though no band can be extricated from the mass, cutting any one of them will free all the others.

By following the pattern here, any number of bands can be joined in a configuration with the same properties.

Entries in a notebook carried by 37-year-old Iowa burglar Michael Sutton, arrested in the 1950s:

Clothes express and accentuate a person’s personality and station in life. Wear good clothes in order to be inconspicuous. Live in best hotels, so I won’t be noticed going and coming at odd hours.

Always carry the daily paper when on the prowl early in the evening — or a magazine. It looks like a person coming home from the office. Better still, carry a briefcase.

It takes an amazing amount of cunning to master crime.

Use bulb in toilet bowl to hide diamonds in — or cash.

Check to see if a town has an opera house or concerts on certain nights of the week. That’s where rich people congregate. Watch newspapers for names of people attending these.

Rich people live on No. 10 Hill in Baltimore, Maryland.

Believe just the opposite of what people say — especially men — and you will be right ninety percent of the time.

Two guns in shoulder holsters and one 25 or 32 caliber automatic strapped to leg.

Iowa Falls Museum. Solid gold armor. Also $5,000 gun collection, some with silencers. Go up through floor or down through roof.

Dogs love the smell and taste of cinnamon.

Try to find out wealthy people’s birthdays. Chances are they have birthday parties downstairs. Then ransack second-floor rooms.

Buy diamonds with cash from Cartier’s when I want to sell a hot one. Show the receipt that it was purchased. Make sure it is same size and cut and purity.

On the day a criminal decides he is smarter than the police, he moves that much closer to the moment of his capture. Don’t belong to the egocentric class of criminals. Thieves who are so egotistical as to think that they can’t be caught are the ones who get caught.

I don’t have to prove my innocence. The police must prove my guilt beyond a reasonable doubt.

“I wonder a good deal about whether I’m crazy or not,” he told journalist St. Clair McElway. “They tell me they’ve got me taped as a constitutional psychopath, whatever the hell that is.”

(From Dennis Potter and Kevin B. Kinnee, Preliminary Criminal Investigations, 2015.)

A problem from Crux Mathematicorum, April 2006:

“My most important rule is one that sums up the 10: If it sounds like writing, I rewrite it.”

tomecide: the destruction of a book

shotclog: a drinking companion tolerated because he pays for the drinks

allonym: the name of a real person borrowed by an author

feuterer: someone who keeps a dog

hypnopedia: the process of learning while asleep (e.g. by listening to a recording)

panchreston: a broadly inclusive thesis that purports to cover all aspects of its subject but usually ends up as an unacceptable oversimplification

grangousier: one who will swallow anything

ferroequinologist: a railroad enthusiast (“one who studies the iron horse”)

infracaninophile: a lover of the underdog

anti-fogmatic: an alcoholic drink that counteracts the effects of fog

In 2014 a Futility Closet reader led me to elephantocetomachia, “a fight between an elephant and a whale,” a valuable word assembled from spare parts. And my notes say that vacansopapurosophobia means “fear of blank paper” — a useful expression, even if it’s not in the dictionary. 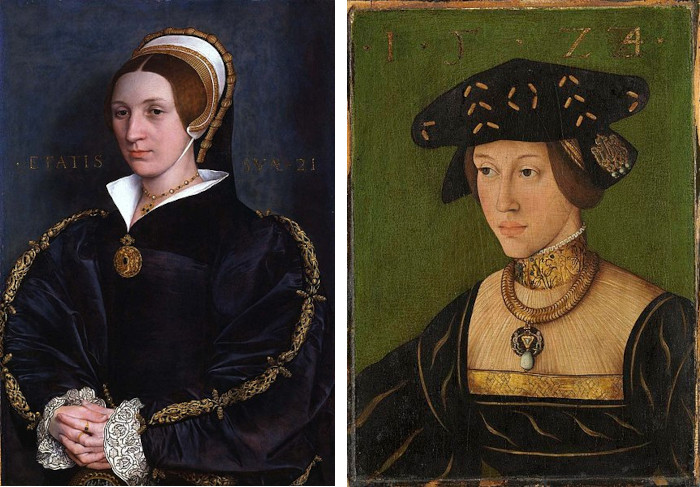 Here are two 16th-century German portraits of seated ladies wearing hats, shown in three-quarter view. The one on the left was painted by Hans Holbein, the one on the right by the lesser-known Hans Krell. A panel of 12 specialists agreed that the Holbein painting had more artistic merit, and subjects who said they were familiar with art agreed with them. But individuals with no art expertise often chose the “wrong” painting, the Krell. This would suggest that people’s judgment in art is shaped by their expertise.

But Holbein is also much more famous than Krell, and this factor is likely to influence judgments too. How important is it? That’s not clear.

“Only if we can show that art experts across cultures agree on the comparative aesthetic merit of works they have never seen before and never heard of can we conclude there is consensus independent of cultural learning,” notes Boston College psychologist Ellen Winner. “This kind of study has not been done.”

A golfer takes a swing at a golf ball. Fortunately it’s a good shot, and the ball heads for the cup. Unfortunately, a squirrel, rather dangerously positioned near the cup, kicks the ball away, thus decreasing the ball’s chance of landing in the cup. Fortunately, the ball then hits the branch of a nearby tree and is deflected into the cup.