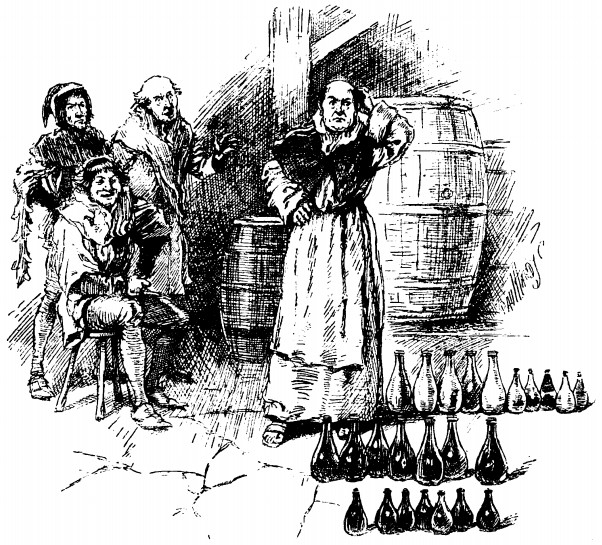 Abbott Francis sends for his cellarman and complains that a particular bottling of wine is not to his taste. He asks how many bottles he had produced. The cellarman tells him that there had been 12 large and 12 small bottles, and that 5 of each have been drunk. The abbot replies that three men are waiting at the gate, and orders the cellarman to give each of them some combination of full and empty bottles so that each man receives the same quantity of wine and combination of bottles.

How can the cellarman do this? He has seven large and seven small bottles full of wine, and five large and five small bottles that are empty. A large bottle holds twice as much wine as a small one, but a large bottle when empty is not worth two small ones — hence the abbot’s order that each man must take away the same number of bottles of each size. A puzzle from reader Paul Sophocleous:

Van Helsing, who is of course famous for his part in the destruction of Dracula, has had many other encounters with supernatural creatures. In the early hours of one morning, he was woken by a loud knock at the door. “Come quickly!” cried the chief of police. “There’s been a ghastly attack at the manor house on the hill!”

Van Helsing dressed hurriedly and followed the chief. A grisly sight met him when he arrived. The front door of the house was open, and the beam of light that came from within shone on the body of a young man lying on the path. His throat had been torn out viciously, as though he had been attacked by some kind of hideous wild beast. Van Helsing looked around, but the grounds were dark, since the moon had set some time before, and he could see nothing else.

He stepped inside and found that several officers of the local constabulary were comforting a woman who appeared to be the maid. “It was horrible!” she cried. “I came down here after hearing some racket outside, and I found the young master at the door. ‘There’s something out there,’ he told me, ‘some beast, and I mean to drive it off.’ And he had in his hand the poker from the fireplace as a weapon. But when he opened the door, it was on him in a flash, a great beast, all hairy and shaggy, bigger than a man it was!”

Van Helsing stepped forward. “What was it?” he demanded.

The maid let out a little scream and gasped, “It was a werewolf!” And with that she fainted dead away.

“Could it be, Van Helsing?” said the chief, sounding worried.

Van Helsing shook his head. “Not a chance.”

A problem from the American Mathematical Monthly, March 1930:

Two men jointly own x cows. They sell these for x dollars per head and use the proceeds to buy some sheep at $12 per head. Their income from the cows isn’t divisible by 12, so they buy a lamb with the remainder. Later they divide the flock so that each man has the same number of animals. This leaves the man with the lamb somewhat short-changed, so the other man gives him a harmonica. What’s the harmonica worth? Here are six new lateral thinking puzzles to test your wits and stump your friends — play along with us as we try to untangle some perplexing situations using yes-or-no questions.

END_OF_DOCUMENT_TOKEN_TO_BE_REPLACED

Now, who’s been more generous? Courtier B argues that he’s given you twice as much as A — after all, for any n, B’s nth envelope contains twice as much money as A’s.

But Courtier A argues that he’s given you twice as much as B — A’s offerings include a gift of every integer size, but the odd dollar amounts are missing from B’s.

So who has given you more money? Suppose you’re working on an algebraic expression that involves variables, addition, multiplication, and parentheses. You try repeatedly to expand it using the distributive law. How do you know that the expression won’t continue to expand forever?

which has more parentheses than the original expression. To kill some time before a meeting of chess grandmasters, Burt Hochberg offered this anonymous puzzle from the 15th century. White must place four white rooks on the board, one at a time, giving check with each one. After each placement the black king can respond with any normal legal move. How can White plan his moves so that the fourth rook reliably gives checkmate?

There’s no trick, and in fact there are several solutions, but Hochberg says the grandmasters studied the position for several minutes before Paul Keres came up with an answer. What was it? This is said to have been the most popular problem presented in the American Mathematical Monthly. It was proposed by P.L. Chessin of Westinghouse in the April 1954 issue. Each of the digits in this long division problem has been replaced with an x — except for a single 8 in the quotient. Can you reconstruct the problem? Another conundrum from Henry Dudeney’s The Canterbury Puzzles:

A squire has drawn a portrait of King Edward III with a single continuous stroke of his pen. “‘Tis a riddle to find where the stroke doth begin and where it doth also end. To him who shall first show it unto me will I give the portraiture.” What is the answer?