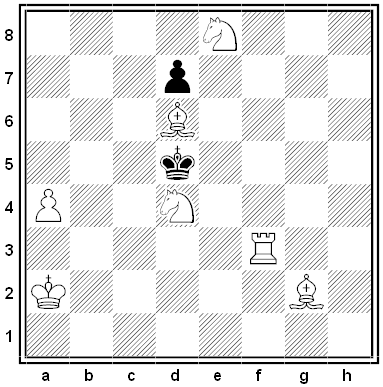 By W. Timbrell Pierce. White to mate in two moves.

A Matter of Degree

A clever conundrum from the U.K. Government Communications Headquarters Christmas Puzzle Quiz — it doesn’t even appear to be a question:

The answer is 52°12′N 1°41′W. The listed coordinates identify Ware, Issa, Bardstown, North-East, Of, and Cheltenham. Where is a Bard’s town northeast of Cheltenham? Stratford-upon-Avon! Its own coordinates make up the answer.

GCHQ is a great fount of excellent original puzzles — some are given on their website, they’ve published two collections, and they regularly post brainteasers on Twitter.

Earlier this year, Futility Closet featured a puzzle based upon the well-known 7-segment display. Less well known is the 15-cell display shown in Figure 1, in which each decimal digit appears as a pattern of highlighted cells within a 3×5 rectangle. Call these the small rectangles. Observe also that the digit 1 is represented as the vertical column of 5 cells in the centre of its small rectangle rather than as either of the two alternative columns immediately to left and right, a detail that is important in view of what follows.

In the same way, a number occupying position x in either of the readouts will be found to identify the total number of cells occurring in position x within the digits of the other readout. That is, the two readouts are co-descriptive, they describe each other. 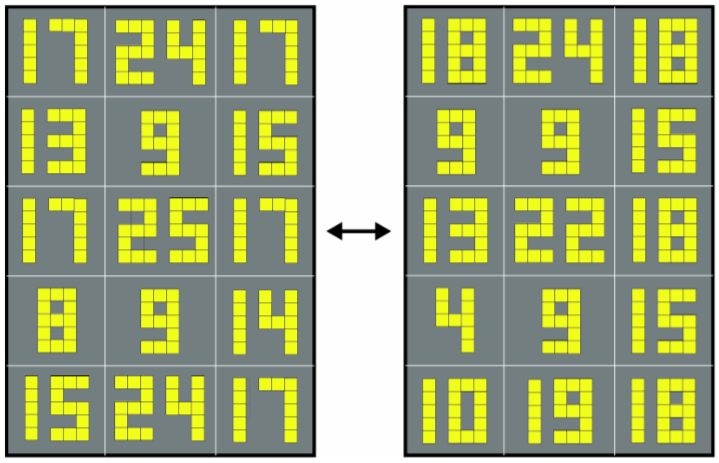 Recalling now the solution to the earlier mentioned 7-segment display puzzle, some readers may recall that it involved an iterative process that terminated in a loop of length 4. Likewise, the pair of readouts in Figure 2 are the result of a similar process, but now terminating in a loop of length 2. In that case we were counting segments, here we are counting cells. An obvious question thus prompted is: What kind of a readout would result from a loop of length 1? The answer is simple: a description of the readout resulting from a loop of length 1 would be a copy of the same readout. That is, it will be a self-descriptive readout, the description of which is identical to itself. Such a readout does indeed exist. Can the reader find it? 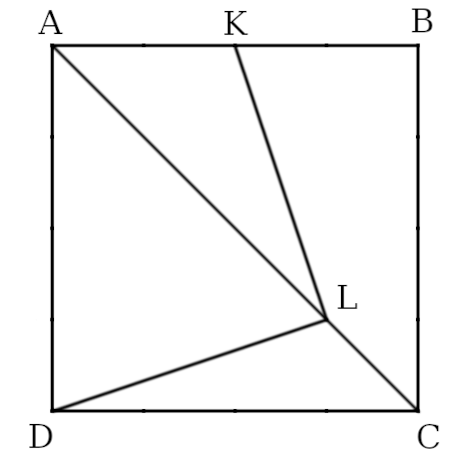 A brainteaser by Y. Bogaturov, via Quantum, November-December 1991:

In square ABCD, point L divides diagonal AC in the ratio 3:1 and K is the midpoint of side AB. Prove that angle KLD is a right angle.

A problem from the February 2006 issue of Crux Mathematicorum:

In a set of five positive integers, show that it’s always possible to choose three such that their sum is a multiple of 3. 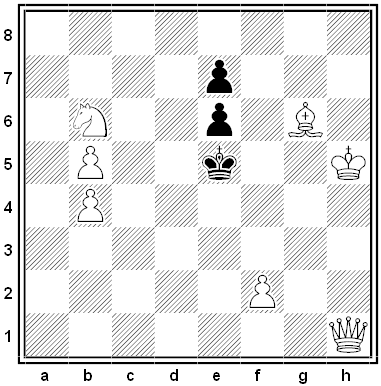 When Raymond Smullyan was teaching probability at Princeton, he told one class about the birthday paradox — the fact that if there are 23 people in a room, the chances are greater than 50 percent that at least two of them share a birthday. There were only 19 students in the classroom, so he said that the chance that two of them shared a birthday was quite small.

One boy said, “I’ll bet you a quarter that two of us here have the same birthday.”

Smullyan thought about that for a moment and said, “Oh, of course! You know the birthday of someone else here as well as your own!”

The boy said, “No, I give you my word that I don’t know the birthday of anyone here other than my own. Nevertheless I’ll bet you that there are two of us here who have the same birthday.”

Smullyan took the bet and lost. Why?

Two trains set out at 7 a.m., one headed from A to B and the other from B to A. The first reaches its destination in 8 hours, the second in 12. At what hour will the two trains pass one another?

In the game Chomp, two players begin with a rectangular grid. The first player chooses any square and removes it from the grid, together with all the squares above and to the right of it. The second player chooses one of the remaining squares and removes that, together with all the squares above it and to its right. The two take turns in this way until one of them is forced to remove the last square. That player loses.

If the starting grid is square, can either player force a win? 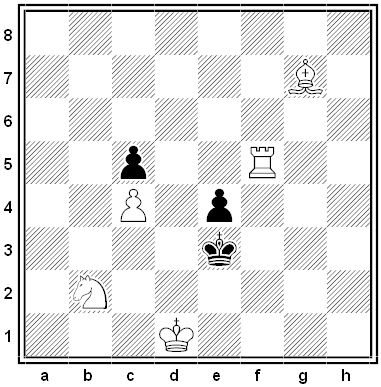 By Joseph Kling. White to mate in two moves.