British infantryman Charlie “Ginger” Byrne was advancing on the German-held village of Beaumont-Hamel on July 1, 1916, when the other members of his gun crew were hit and he was forced to take refuge in a shallow shell hole. He lay there among the ammunition boxes he’d been carrying with only four inches of earth above his head.

I lay as I fell because I daren’t move. I had my legs folded under me and my bloomin’ bayonet was on my left-hand side. I was dying to move that bayonet out of the way so I could get my hip down lower. But that Jerry decided he hadn’t anything better to do than play his gun across my shell-hole. He knew I wasn’t hit. I knew what he was doing. I was a machine gunner myself, wasn’t I? He’d be holding the two handles of his gun, then he’d tap, tap so it played right across the top of the hole; then he’d turn the wheel at the bottom to lower the barrel and then he’d tap, tap the other side to bring it back again. He was hitting the dust just above my head and he smashed the bloomin’ boxes. Bits of ammo flew about everywhere. In a queer sort of way I was lying there almost admiring what he was doing, as though it wasn’t me he was aiming at. He was a fellow machine-gunner, wasn’t he? And he certainly knew his job. But he just couldn’t get that trajectory low enough.

Byrne waited 14 hours through the interminable summer day with the German gunner “nagging away,” firing just over the hole. “Sometimes he’d stop for a bit and turn the gun on someone else; but he’d got right fond of me. Wasted a lot of ammo on me that Jerry did.” When darkness finally came he crawled and then ran across no-man’s-land and escaped, entirely uninjured.

One other interesting detail from In Your Face, psychologist David Perrett’s 2010 exploration of human attraction. Perrett’s Perception Lab recruited 300 men and 400 women, all of whom had heterosexual partners and had been raised by two parents. They learned that romantic partners tend to look alike — the participants and their partners tended to have similar hair color and similar eye color.

This might be explained by a self-similar preference or narcissism, but on looking deeper into the data Perrett’s team found that the single best predictor of one’s partner’s eye color was the eye color of one’s parent of the opposite sex. If a woman’s mother had blue eyes and her father had brown eyes, she would most likely be partnered with a brown-eyed man. If a man’s mother had blue eyes and his father had brown eyes, his partner most likely had blue eyes. Similarly, the hair color of a man’s mother was the single best predictor of his partner’s hair color. “These results indicate that individuals choose partners who resemble their opposite-sex parent both in eye and hair color.”

One evening, sitting outside the Café de la Paix with Oscar Wilde, we were joined at our table by Caton Woodville, the war correspondent. He was something of a Münchhausen, and liked to boast of his exploits. He had recently been painting a picture for Queen Victoria — I forget what the subject was — in which the Queen herself was portrayed. When it was finished, he received a command to take it to Windsor. He described how Her Majesty entered the room, went up to the picture, examined it carefully in silence and then walked towards the door. As she opened the door she turned round and said coldly, ‘We are redder than that, Mr Woodville,’ and swept out.

On New Year’s Day 1963, two bodies were discovered on an Australian riverbank. Though their identities were quickly determined, weeks of intensive investigation failed to uncover a cause or motive for their deaths. In this week’s episode of the Futility Closet podcast we’ll tell the story of the Bogle-Chandler case, which riveted Australia for years.

We’ll also revisit the Rosenhan study and puzzle over a revealing lighthouse.

END_OF_DOCUMENT_TOKEN_TO_BE_REPLACED

“I can fool you because you’re a human,” he once said. “You have a wonderful human mind that works no different from my human mind. Usually when we’re fooled, the mind hasn’t made a mistake. It’s come to the wrong conclusion for the right reason.”

At the end of a narrow pedestrian alleyway off Paternoster Square near St. Paul’s Cathedral in London are a pair of stainless-steel “angel’s wings” 11 meters high. Designed by Thomas Heatherwick, the sculpture actually serves a practical purpose: It provides ventilation for an electrical substation below ground. Cool air is sucked in through grids on the ground, and hot air is conducted through the sculpture and released high overhead.

“The commissioner had been exploring options that involved creating a single structure that housed both inlet vents and outlet vents,” Heatherwick wrote. “It made a large bulky object that dominated the public square around it, reducing it to little more than a corridor. As this was a sensitive location near St. Paul’s, we decided to make it our priority to shrink the visible mass of the vent structure to a minimum.”

Imagine a society which does not have an established medium of painting but does produce a kind of work called guernicas. Guernicas are like versions of Picasso’s ‘Guernica’ done in various bas-relief dimensions. All of them are surfaces with the colors and shapes of Picasso’s ‘Guernica,’ but the surfaces are molded to protrude from the wall like relief maps of different kinds of terrain. Some guernicas have rolling surfaces, others are sharp and jagged, still others contain several relatively flat planes at various angles to each other, and so forth. Picasso’s ‘Guernica’ would be counted as a guernica in this society — a perfectly flat one — rather than as a painting. Its flatness is variable and the figures on its surface are standard relative to the category of guernicas. Thus the flatness, which is standard for us, would be variable for members of the other society … and the figures on the surface, which are variable for us, would be standard for them. This would make for a profound difference between our aesthetic reaction to ‘Guernica’ and theirs. It seems violent, dynamic, vital, disturbing to us. But I imagine it would strike them as cold, stark, lifeless, or serene and restful, or perhaps bland, dull, boring — but in any case not violent, dynamic, and vital. We do not pay attention to or take note of ‘Guernicas”s flatness; this is a feature we take for granted in paintings, as it were. But for the other society this is ‘Guernica”s most striking and noteworthy characteristic — what is expressive about it. Conversely, ‘Guernica”s color patches, which we find noteworthy and expressive, are insignificant to them.

The first line describes its own contents: It contains one 0, seven 1s, three 2s, and so on.

In the same style, the second line describes the joint contents of lines 1 and 2.

And so on: The fifth line describes the contents of the whole table: It contains eight 0s, twenty 1s, twelve 2s, etc.

He suspects that a six-line table is possible, but he hasn’t found one yet.

This is the only case in which the sum of the first k perfect squares is itself a square. 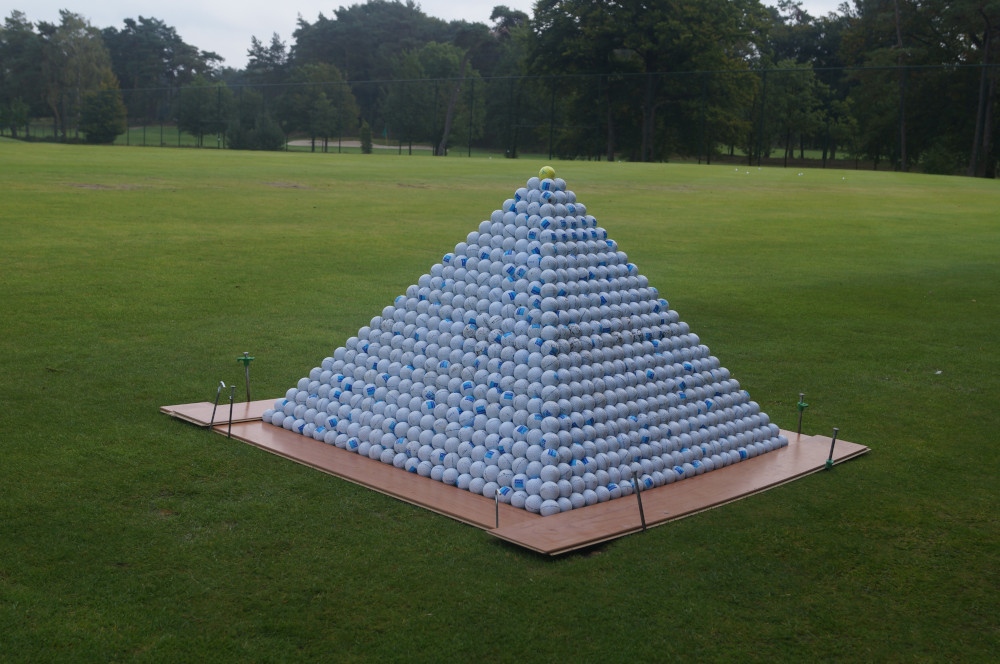 It took him an hour and a half. (Thanks, Pieter.)