accinge
v. to prepare or apply oneself

A villainous Nazi named Roehm
Was searching for rhymes matching “poem.”
Then, chortling with glee,
Stated that he
Had found one at last. “That’ll show ’em!” 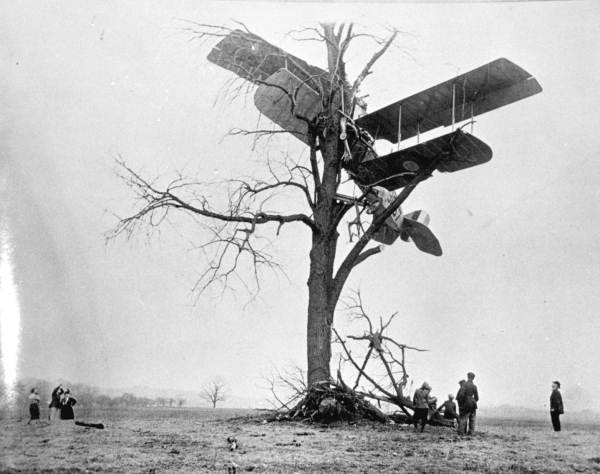 symposiast
n. a member of a drinking party

bouleversement
n. a turning upside down

“In Other Words,” an airman’s drinking song from World War I:

I was fighting a Hun in the heyday of youth,
Or perhaps ’twas a Nieuport or Spad.
I put in a burst at a moderate range
And it didn’t seem too bad.
For he put down his nose in a curious way,
And as I watched, I am happy to say:

Chorus:
He descended with unparalleled rapidity,
His velocity ‘twould beat me to compute.
I speak with unimpeachable veracity,
With evidence complete and absolute.
He suffered from spontaneous combustion
As towards terrestrial sanctuary he dashed,
In other words — he crashed!

I was telling the tale when a message came through
To say ’twas a poor RE8.
The news somewhat dashed me, I rather supposed
I was in for a bit of hate.
The CO approached me. I felt rather weak,
For his face was all mottled, and when he did speak

Chorus:
He strafed me with unmitigated violence,
With wholly reprehensible abuse.
His language in its blasphemous simplicity
Was rather more exotic than abstruse.
He mentioned that the height of his ambition
Was to see your humble servant duly hung.
I returned to Home Establishment next morning,
In other words — I was strung!

As a pilot in France I flew over the lines
And there met an Albatros scout.
It seemed that he saw me, or so I presumed;
His manoeuvres left small room for doubt.
For he sat on my tail without further delay
Of my subsequent actions I think I may say:

Chorus:
My turns approximated to the vertical,
I deemed it most judicious to proceed.
I frequently gyrated on my axis,
And attained colossal atmospheric speed,
I descended with unparalleled momentum,
My propeller’s point of rupture I surpassed,
And performed the most astonishing evolutions,
In other words — * *** ****!

I was testing a Camel on last Friday week
For the purpose of passing her out.
And before fifteen seconds of flight had elapsed
I was filled with a horrible doubt
As to whether intact I should land from my flight.
I half thought I’d crashed — and half thought quite right!

Chorus:
The machine seemed to lack coagulation,
The struts and sockets didn’t rendezvous,
The wings had lost their super-imposition,
Their stagger and their incidental, too!
The fuselage developed undulations,
The circumjacent fabric came unstitched
Instanter was reduction to components,
In other words — she’s pitched! 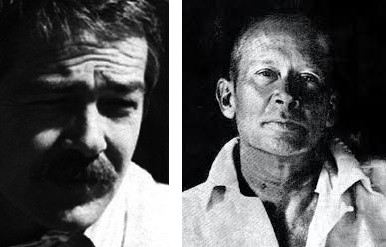 A poem by Louis Phillips: “If the Modern Artist Ralph Goings Had Met the Poet E.E. Cummings”:

In 2006, screenwriter Gregory K. Pincus invited the readers of his blog to submit “Fibs,” poems of six lines whose syllable counts reflect the Fibonacci sequence:

Predictably, this took off on Slashdot, where it spawned a thousand variations:

01 It
01 is
02 really
03 not taxing
05 to create a Fib,
08 but still they are interesting
13 sequences of numbers. We are familiar with
21 the ‘rabbit generation’ origins of the sequence, but it can also describe
34 the number of petals on a flower, or the number of curves on a sunflower head, on a pineapple, or even on a pinecone.

And from there it expanded around the world. “The success of this story was entirely because the poem was based on the Fibonacci sequence,” Slashdot founder Rob Malda told the Poetry Foundation. “Geeks love interesting number sequences, and that one is way up there. Generally speaking literature by itself isn’t our typical subject matter, but interesting use of math definitely is.”

“To my surprise (and joy), I continue to find new threads of Fibs popping up all around the Web,” wrote Pincus, who eventually parlayed the idea into a novel. “I’ve seen Fibs in over a dozen different languages, and I’d also note that today a cat left a post in the comments of The Fib, joining a priorly poetic dog, so I think it’s safe to say that Fibs travel well.”

There was an old man who said, “Do
Tell me how I’m to add two and two!
I’m not very sure
That it does not make four,
But I fear that is almost too few.”

A mathematician confided
A Möbius strip is one-sided.
You’ll get quite a laugh
If you cut one in half,
For it stays in one piece when divided.

A mathematician named Ben
Could only count modulo ten.
He said, “When I go
Past my last little toe,
I have to start over again.”

From Dave Morice, in the November 2004 Word Ways:

(From Through the Looking-Glass:)

‘She can’t do Addition,’ the Red Queen interrupted.

Two classics, one from Leigh Mercer:

A dozen, a gross, and a score
Plus three times the square root of four
Divided by seven
Plus five times eleven
Is nine squared and not a bit more.

UPDATE: Reader Jochen Voss found this on a blackboard at Warwick University:

If M’s a complete metric space
(and non-empty), it’s always the case:
If f’s a contraction
Then, under its action,
Exactly one point stays in place.

And Trevor Hawkes sent this:

A mathematician called Klein
Thought the Möbius strip was divine.
He said if you glue
The edges of two
You get a nice bottle like mine. 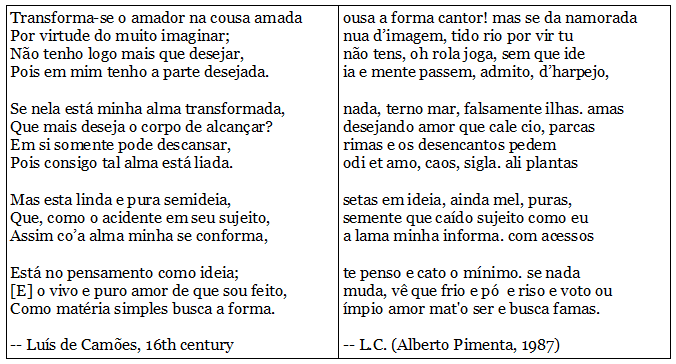 In 1987, Portuguese poet Alberto Pimenta took the sonnet Transforma-se o amador na cousa amada (The lover becomes the thing he loves), by the 16th-century poet Luís de Camões, and rearranged the letters of each line to produce a new sonnet, Ousa a forma cantor! Mas se da namorada (Dare the form, songster! But if the girlfriend).

The lover becomes the thing he loves
by virtue of much imagining;
since what I long for is already in me,
the act of longing should be enough.
If my soul becomes the beloved,
what more can my body long for?
Only in itself will it find peace,
since my body and soul are linked.
But this pure, fair demigoddess,
who with my soul is in accord
like an accident with its subject,
exists in my mind as a mere idea;
the pure and living love I’m made of
seeks, like simple matter, form.

Carlota Simões and Nuno Coelho of the University of Coimbra calculated that the letters in Camões’ sonnet can be rearranged within their lines in 5.3 × 10312 possible ways.

Interestingly, after Pimenta’s anagramming there were two letters left over, L and C, which are the initials of the original poet, Luís de Camões. “It seems that, in some mysterious and magical way, Luís de Camões came to reclaim the authorship of the second poem as well.”

In 2014, when designer Nuno Coelho challenged his multimedia students to render the transformation, Joana Rodrigues offered this:

Related: In 2005 mathematician Mike Keith devised a scheme to generate 268,435,456 Shakespearean sonnets, each a line-by-line anagram of the others. And see Choice and Fiction.

I am such a dolent man,
I eptly work each day;
My acts are all becilic,
I’ve just ane things to say.

My nerves are strung, my hair is kempt,
I’m gusting and I’m span:
I look with dain on everyone
And am a pudent man.

I travel cognito and make
A delible impression:
I overcome a slight chalance,
With gruntled self-possession.

My dignation would be great
If I should digent be:
I trust my vagance will bring
An astrous life for me.

From Schott’s Vocab. (Thanks, Jacob.)

In 1863 Union soldiers seized a bag of rebel correspondence as it was about to cross Lake Pontchartrain. In one of the letters, a woman named Anna boasted of a trick she’d played on a Boston newspaper — she’d sent them a poem titled “The Gypsy’s Wassail,” which she assured them was written in Sanskrit:

The paper published this “beautiful and patriotic poem, by our talented contributor.” A few days later a reader discovered the trick — it was simply English written in reverse:

She had signed her name only “Anna,” but in the same bag they found a letter from her sister to her husband, saying “Anna writes you one of her amusing letters,” and this contained her signature and address. Union general Wickham Hoffman wrote to her: “I told her that her letter had fallen into the hands of one of those ‘Yankee’ officers whom she saw fit to abuse, and who was so pleased with its wit that he should take great pleasure in forwarding it to its destination; that in return he had only to ask that when the author of ‘The Gypsy’s Wassail’ favored the expectant world with another poem, he might be honored with an early copy. Anna must have been rather surprised.”

“A Brief in Rhyme”

From the Ohio Law Reporter: In 1916 a defendant filed this brief in the Court of Common Pleas in Fayette County, Ohio:

The sages of old with reason assumed
The shorter the horse the sooner he’s groomed;
And so with this case and the questions involved,
They’re exceedingly brief and speedily solved.

The plaintiff below was a broker, it seems,
And perhaps being broke, saw a fee in his dreams,
He had from one Ellis a small farm to sell
And likewise, from Strobel, a town-lot as well.

One day on the street by accident strange
He met Mr. Strobel and proposed an exchange.
He also, quite prudently, spoke of the fee
And told Brother Strobel how much it would be.

He stated both principals ought to agree
On the portion each party would pay of said fee.
“Very well,” then said Strobel, “I’ll trade for his farm,
And as for your fee, have not an alarm,

“Go straight and see Ellis, and get him to say
How much of said fee he’ll be willing to pay.”
The broker then started to see Mr. Ellis,
And now his reply Brother Ellis will tell us:

Then the broker returned and reported to Strobel
Who sanctioned the terms in these words grand and noble
“$2 from 16 leaves 14 for me
And this I will pay you, to make up your fee;

“Day-after-tomorrow I’ll pay you a V
And the rest in installments — to this I agree;
Go close up the deal as soon as can be,
The sooner the better for you and for me.”

So the deal was soon closed and the deeds passed, you bet
But that “day-after-tomorrow” has never come yet
And that was the day Strobel promised to pay
That first V installment in such a sure way.

The evidence shows that when Strobel sent
The broker to see Mr. Ellis, he went
And did everything he required that he should
And tried to get Ellis to pay all he could.

And now I submit, Your Honor, to you
In absence of proof to a contrary view,
The law will presume good faith in this case
And order the broker to win in the race.

“Of the result of his effort we are not informed,” reports the journal, “but it no doubt was given ‘careful consideration.'”