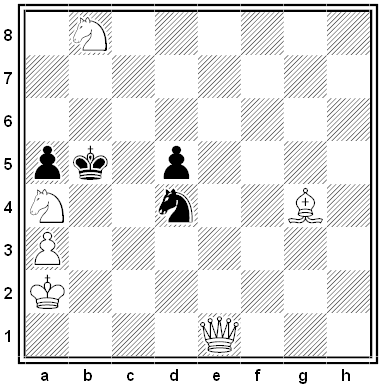 By K. Makovsky. White to mate in two moves.

In The Two-Move Chess Problem (1890), Benjamin Glover Laws calls the first move here “ideal” and “splendid.” “[I]t is not always a composer’s good fortune to strike a vein which is susceptible of such an excellent opening move as is illustrated in this problem.” What is it?

In 2012 computer scientist Andrew Adamatzky set a plasmodium of the slime mold Physarum polycephalum into a maze with an oat flake at its center. By following a gradient of chemo-attractants given off by the flake, the plasmodium was able to solve the maze in one pass, extending a protoplasmic tube to the target.

The original recording was made at one frame per five minutes; this playback is 25-30 frames per second.

“It is interesting that most of the human race has a reserve of the enzyme necessary to render alcohol harmless to the body — as if nature meant us to drink alcohol, unlike animals to which alcohol is a poison.”

In 1947 two Harvard undergraduates, William Burkhart and Theodore Kalin, built a primitive machine for doing propositional logic. They had been taking a course in symbolic logic with Willard Van Orman Quine and were tired of solving problems with pencil and paper, so they set about making a machine that would do their homework automatically.

The result of their $150 investment was a small machine that could handle problems involving up to 12 terms in the propositional calculus. The “Kalin-Burkhart machine” marks a milestone in the development of logic machines, but working in the machine’s language is so laborious that using a pencil is faster.

“It is interesting to note that when certain types of paradoxes are fed to the Kalin-Burkhart machine it goes into an oscillating phase, switching rapidly back and forth from true to false,” noted Martin Gardner in Logic Machines and Diagrams (1958). “In a letter to Burkhart in 1947 Kalin described one such example and concluded, ‘This may be a version of Russell’s paradox. Anyway, it makes a hell of a racket.'”

One commenter wrote, “Now we know why Death carries a Scythe, not a brushcutter.”

This verse is known as “Lord Macaulay’s Last Riddle.” Lord Macaulay was Thomas Babington Macaulay (1800-1859), though his authorship of the riddle is uncertain. What’s the answer?

Let us look at it quite closely,
‘Tis a very ugly word,
And one that makes one shudder
Whenever it is heard.

It mayn’t be very wicked;
It must be always bad,
And speaks of sin and suffering
Enough to make one mad.

They say it is a compound word,
And that is very true;
And then they decompose it,
Which, of course, they’re free to do.

If, of the dozen letters
We take off the first three,
We have the nine remaining
As sad as they can be;

For, though it seems to make it less,
In fact it makes it more,
For it takes the brute creation in,
Which was left out before.

Let’s see if we can mend it —
It’s possible we may,
If only we divide it
In some new-fashioned way.

Instead of three and nine, then,
Let’s make it four and eight;
You’ll say it makes no difference,
At least not very great;

But only see the consequence!
That’s all that need be done
To change this mass of sadness
To unmitigated fun.

It clears off swords and pistols
Revolvers, bowie-knives,
And all the horrid weapons
By which men lose their lives;

It wakens holier voices —
And now joyfully is heard
The native sound of gladness
Compressed into one word!

Yes! Four and eight, my friends!
Let that be yours and mine,
Though all the hosts of demons
Rejoice in three and nine.