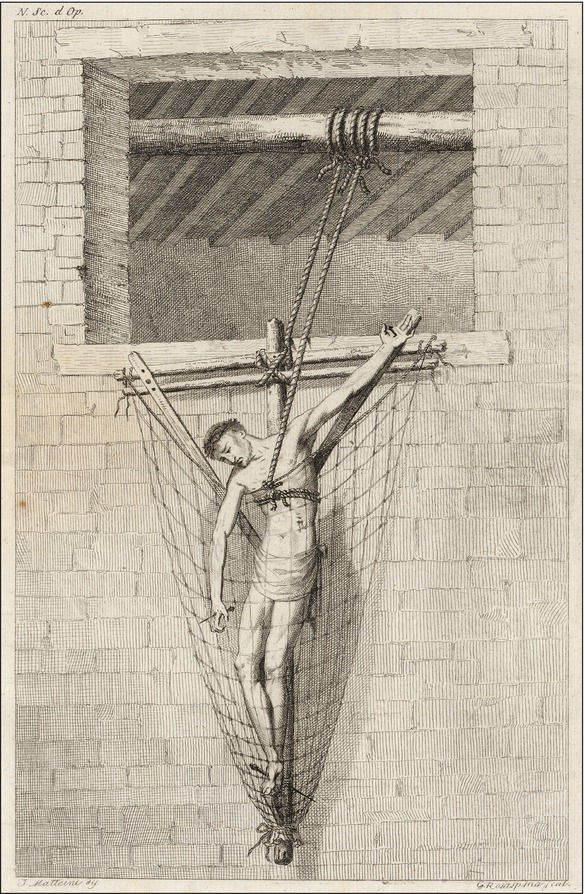 In 1805 a disturbed Venice shoemaker named Matthew Lovat nearly managed to crucify himself. From William Wood Seymour’s The Cross in Tradition, History, and Art, 1898:

Having prepared a cross, he stripped himself naked except for a girdle about his loins. Fearing that he would not be able to attach himself securely to the cross, he covered the lower part with a net, extending from the suppedaneum to the transverse. Having introduced himself into this, he next drove a nail through the palm of his right hand by striking it on the floor until the point appeared on the outside. He then drove a nail through both feet, fastening them to the wood. Tying himself around the waist to the cross, he next wounded himself in the side with a knife. He was yet in the room: to show himself to the people required the exercise of much fortitude and resolution. The foot of the cross having been placed upon the window-sill, he drew himself forward by means of his fingers pressing on the floor, until the lower end, overbalancing the rest, the cross fell outside of the house and hung by ropes previously fixed to sustain it. He then fastened the right hand, already pierced by the nail, to its proper place, but after driving the nail through the left hand he was unable to affix it. This took place at eight o’clock in the morning. As soon as he was seen he was taken down and carried to the hospital where his wounds were completely cured.

I haven’t been able to learn why he thought this was necessary. After an earlier attempt was prevented, “Being interrogated repeatedly as to the motive for his self-crucifixion, he maintained an obstinate silence, except, that he once said to his brother, that that day was the festival of St. Matthew, and that he could give no farther explanation.” After the 1805 attempt, he would say only, “The pride of man must be mortified, it must expire on the cross.” He starved himself to death in an asylum shortly afterward.