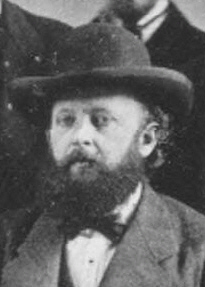 Just a charming little anecdote: When German chemist Adolf von Baeyer achieved a long-sought result, he tipped his hat to it:

Eventually, however, even Baeyer was supersaturated with these hydrogenations, and the sorely tried assistants hailed with deep relief the transference of his interest to succinylsuccinic ester and diketocyclohexane. By means of a dodge (‘Kunstgriff’) of which Baeyer was very proud (treatment with sodium amalgam in presence of sodium bicarbonate), the diketone was reduced to quinitol. At the first glimpse of the crystals of the new substance Baeyer ceremoniously raised his hat!

It must be explained here that the Master’s famous greenish-black hat plays the part of a perpetual epithet in Prof. Rupe’s narrative. As the celebrated sword-pommel to Paracelsus, so this romantic hard-hitter or ‘alte Melone’ to Baeyer: the former was said to contain the vital mercury of the mediaeval philosophers; the latter certainly enshrined one of the keenest chemical intellects of the modern world. … Baeyer’s head was normally covered. Only in moments of unusual excitement or elation did the Chef remove his hat: apart from such occasions his shiny pate remained in permanent eclipse.

(From his colleague John Read’s 1947 book Humour and Humanism in Chemistry.)