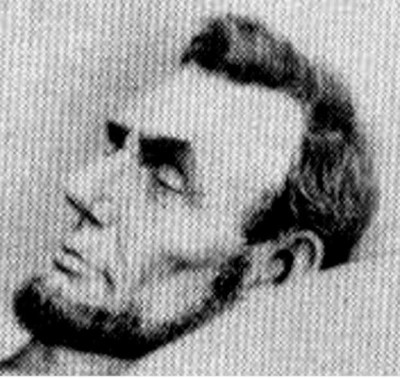 On the day after Abraham Lincoln’s assassination, Army surgeons Edward Curtis and Joseph Janvier Woodward performed an autopsy at the White House. Curtis mentioned one sobering moment in a letter to his mother:

I proceeded to open the head and remove the brain down to the track of the ball. The latter had entered a little to the left of the median line at the back of the head, had passed almost directly forwards through the center of the brain and lodged. Not finding it readily, we proceeded to remove the entire brain, when, as I was lifting the latter from the cavity of the skull, suddenly the bullet dropped out through my fingers and fell, breaking the solemn silence of the room with its clatter, into an empty basin that was standing beneath. There it lay upon the white china, a little black mass no bigger than the end of my finger — dull, motionless and harmless, yet the cause of such mighty changes in the world’s history as we may perhaps never realize.

He added, “[S]ilently, in one corner of the room, I prepared the brain for weighing. As I looked at the mass of soft gray and white substance that I was carefully washing, it was impossible to realize that it was that mere clay upon whose workings, but the day before, rested the hopes of the nation. I felt more profoundly impressed than ever with the mystery of that unknown something which may be named ‘vital spark’ as well as anything else, whose absence or presence makes all the immeasurable difference between an inert mass of matter owning obedience to no laws but those covering the physical and chemical forces of the universe, and on the other hand, a living brain by whose silent, subtle machinery a world may be ruled.”