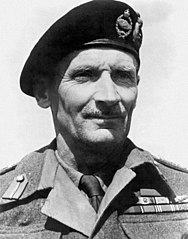 We were all used to the heat; but whereas the desert was dry, Sicily was humid. … I well remember an incident that occurred one day as I was driving in my open car up to the front. I saw a lorry coming towards me with a soldier apparently completely naked in the driver’s seat, wearing a silk top hat. As the lorry passed me, the driver leant out from his cab and took off his hat to me with a sweeping and gallant gesture. I just roared with laughter. However, while I was not particular about dress so long as the soldiers fought well and we won our battles, I at once decided that there were limits. When I got back to my headquarters I issued the only order I ever issued about dress in the Eighth Army; it read as follows: ‘Top hats will not be worn in the Eighth Army.’

— The Memoirs of Field Marshal Montgomery, 1958