A “kinde of Divination” “to tell your friend how many pence or single peeces, reckoning them one with another, he hath in his purse, or should thinke in his minde,” from Robert Recorde’s The Ground of Arts, 1618:

[F]irst bid him double the peeces hee hath in his purse, or the number hee thinketh. … Now after hee hath doubled his number, bid him adde thereunto 5 more, which done, bid him multiply that his number by 5 also: which done bid him tell you the just sum of his last multiplication, which sum the giver thinking it nothing availeable, because it is so great above his pretended imagination: yet thereby shall you presently with the helpe of Subtraction tell his proposed number. 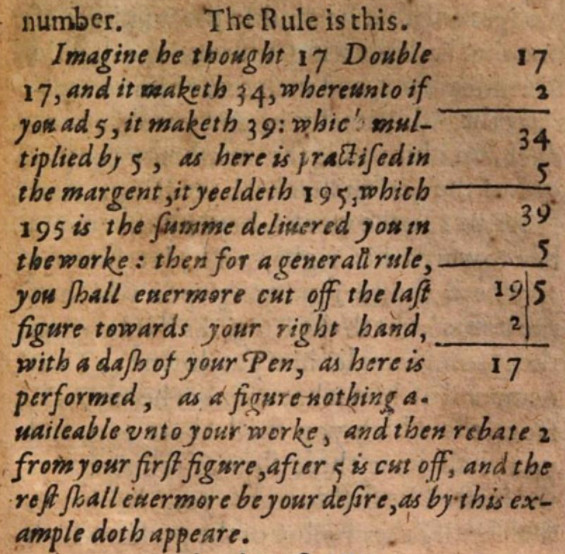 Apparently the section on “divers Sportes and Pastimes, done by Number” was contributed by Southwark schoolmaster John Mellis in 1582. “[T]he fact that this chapter on mathematical games was included in every subsequent edition of The Ground of Artes, save one, indicates that the idea of mathematical games found a receptive audience among arithmetic students.”