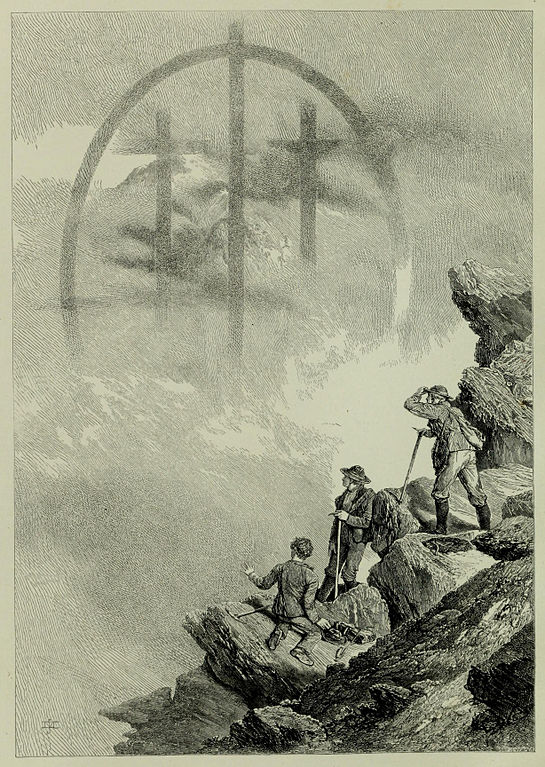 Shortly after conquering the Matterhorn on July 14, 1865, Edward Whymper watched four of his companions fall to their deaths down the mountain’s precipitous north face. Afterward he and his two Swiss guides, the Taugwalders, beheld a remarkable figure in the sky:

A mighty arch appeared, rising above the Lyskamm, high into the sky. Pale, colourless, and noiseless, but perfectly sharp and defined, except where it was lost in the clouds, this unearthly apparition seemed like a vision from another world; and, almost appalled, we watched with amazement the gradual development of two vast crosses, one on either side. If the Taugwalders had not been the first to perceive it, I should have doubted my senses. They thought it might have some connection with the accident, and I, after a while, that it might bear some relation to ourselves. But our movements had no effect on it. It was a fearful and wonderful sight; unique in my experience, and impressive beyond description, coming at such a moment.

What was this? Whymper later called it a fog bow, a bow that forms in fog rather than rain. Unfortunately, we have no photograph, only a sketch and a woodcut. In a 2002 simulation C.J. Hardwick tried to account for the features as Whymper had described them. “A fogbow and ice crystal arcs could have produced a circle and crosses in a direction consistent with the apparition,” he concluded in 2005. “However, while this simulation used a crystal type that can occur, it required an unusual alignment that would be very rare.”