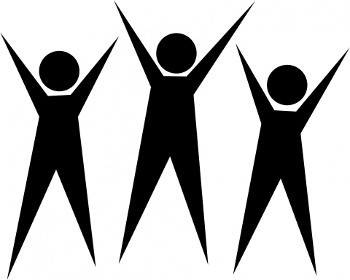 The familiar posture of victory — raising the arms, tilting the head back, and expanding the chest — appears to be hard-wired into the human brain, probably because it was a universal sign of dominance in our ape ancestors.

In 2008, psychologists Jessica Tracy and David Matsumoto compared the expressions and body language of sighted, blind, and congenitally blind judo competitors representing more than 30 countries in the 2004 Olympic and Paralympic Games. They found that the blind athletes used the same gestures as their sighted peers, even though they’d never seen anyone else use them.

“Since congenitally blind individuals could not have learned pride and shame behaviours from watching others, these displays of victory or defeat are likely to be an innate biological propensity,” Tracy told the Telegraph.

The same victory gesture is seen in children as young as 3. Tracy said she was studying similar behaviors in chimps and that “anecdotal evidence mentioned in the paper suggests that, yes, the human pride and shame displays are very similar to non-human displays of dominance and submission, seen in a wide range of animals.”