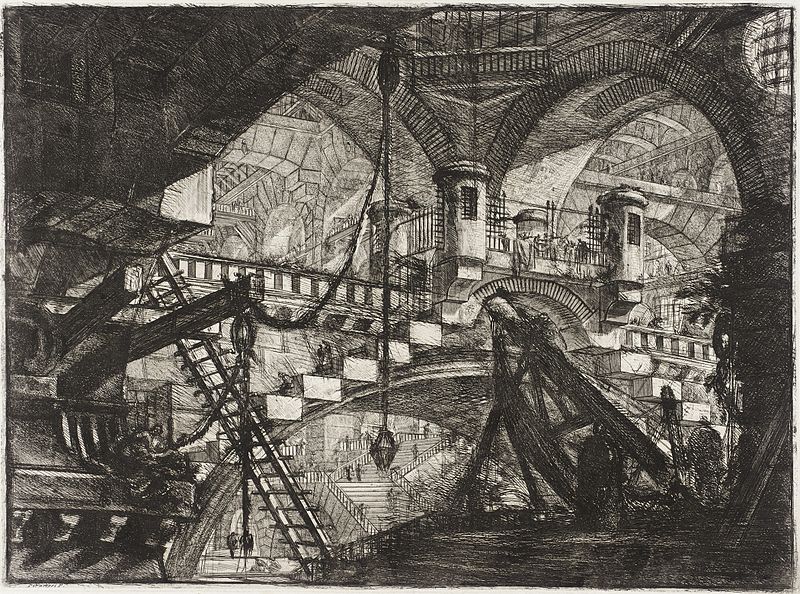 Italian artist Giovanni Piranesi spent his days making etchings of Roman ruins, but in 1745 he turned out a series of much darker visions, which he called Le Carceri d’Invenzione. “Vaults of colossal proportions from which hang extinguished lanterns, openings closed by bars, spiral staircases and suspended passageways which lead nowhere, immense gallows and wheels, ropes strung on pulleys evoking strange tortures,” writes Roseline Bacou in her collection of the artist’s etchings and drawings, “all these are the visible elements of a closed and nocturnal world.” Thomas De Quincey wrote:

Many years ago, when I was looking over Piranesi’s Antiquities of Rome, Mr. Coleridge, who was standing by, described to me a set of plates by that artist … which record the scenery of his own visions during the delirium of a fever: some of them … representing vast Gothic halls, on the floor of which stood all sorts of engines and machinery, wheels, cables, pulleys, levers, catapults, etc., etc., expressive of enormous power put forth, and resistance overcome. Creeping along the sides of the walls, you perceived a staircase; and upon it, groping his way upwards, was Piranesi himself: follow the stairs a little further, and you perceive it come to a sudden abrupt termination, without any balustrade, and allowing no step onwards to him.

The full collection is here. Aldous Huxley read into the prints “things existing in the physical and metaphysical depths of human souls — to acedia and confusion, to nightmare angst, to incomprehension and to panic bewilderment.” In reworking the prints Piranesi came to relate them to early Rome: One column in the vaults bears the inscription AD TERROREM INCRESCENTIS AVDACIAE, a quotation from Livy’s History of Rome in which the early king Ancus Marcius responds to a loss of values among his people by establishing a prison in the center of the city, “to terrify the growing audacity.” But the initial series were pure fantasy, and their inspiration is unknown.