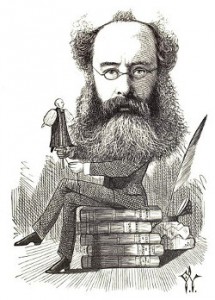 Convalescing from pneumonia one winter, Mary L. Daniels occupied herself by collecting all the digressions to the reader in the 47 novels of Anthony Trollope. Victorian fiction permitted a writer to stop in mid-story and expound his own views, and Trollope indulged this privilege with staggering frequency — together his digressions fill nearly 400 pages of close-set type, practically a novel’s worth in themselves. Some examples:

“These digressions are pure Trollope — at least of that moment — undiluted by plot, character, theme, or modern exegesis,” Daniels writes. “By studying these digressions alone, we should be able to trace any changes in Trollope’s thinking without reference to what we think he meant or to what a particular character said or did.” The whole list is here.