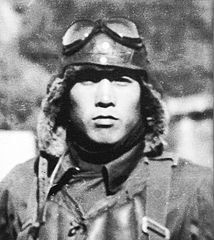 The initial feeling after shooting down someone was relief, because it was not me who was shot down. My next thought was that I was a better pilot, so I felt superior to the enemy aviator who was shot down. These feelings lasted only for a short time. When we shot at each other, we were at very close range, and during this time I could see my opponent’s face very well. When I saw the enemy’s face, it looked terrible because he was going down. Soon after this I felt very bad, because I could imagine that my opponent had a family of his own, and I killed him. Therefore, to this day I feel very bad about shooting down pilots during the war.

Afterward, when these faces haunted his dreams, Harada became an antiwar activist and even traveled to the United States and Britain to meet some of the pilots he’d fought against. “In general, I have a bad feeling about being involved in the war, and I feel guilty about killing other people in combat,” he said. “I also feel that the war should not have happened in the first place. This is because the governments of countries around the world don’t make an effort to resolve their differences. Instead, they order their armed forces to kill each other. I believe World War II veterans know this best, because we were used as ‘pawns’ by our government to fight a war.”