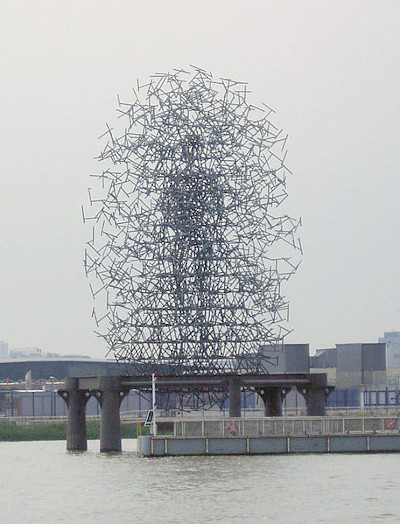 Anthony Gormley’s 1999 sculpture Quantum Cloud is well named — it both does and doesn’t present the figure of a man. It’s composed of sections of steel 1.5 meters long, arranged by a computer using a random walk algorithm starting from points on the surface of an enlarged version of the sculptor’s own body. The result manages to suggest a man’s image without quite depicting it.

“How can you convey the fact that the presence of somebody is greater or different from their appearance?” Gormley writes. “The DOMAINS allowed me to evoke the internal space of the body as a field, but are still bound by an invisible skin: I want to extend or ignore the skin.”

It stands now next to the O2 in London.