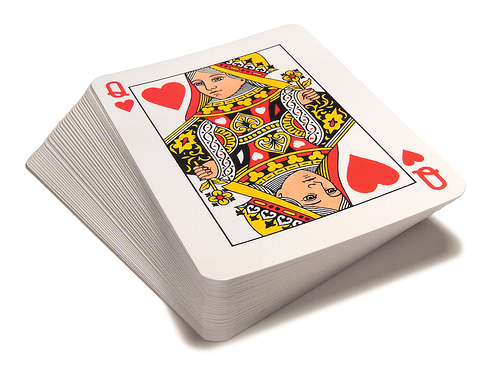 A puzzle by Ben H., a systems engineer at the National Security Agency, from the agency’s August 2016 Puzzle Periodical:

At a work picnic, Todd announces a challenge to his coworkers. Bruce and Ava are selected to play first. Todd places $100 on a table and explains the game. Bruce and Ava will each draw a random card from a standard 52-card deck. Each will hold that card to his/her forehead for the other person to see, but neither can see his/her own card. The players may not communicate in any way. Bruce and Ava will each write down a guess for the color of his/her own card, i.e. red or black. If either one of them guesses correctly, they both win $50. If they are both incorrect, they lose. He gives Bruce and Ava five minutes to devise a strategy beforehand by which they can guarantee that they each walk away with the $50.

Bruce and Ava complete their game and Todd announces the second level of the game. He places $200 on the table. He tells four of his coworkers — Emily, Charles, Doug and Fran — that they will play the same game, except this time guessing the suit of their own card, i.e. clubs, hearts, diamonds or spades. Again, Todd has the four players draw cards and place them on their foreheads so that each player can see the other three players’ cards, but not his/her own. Each player writes down a guess for the suit of his/her own card. If at least one of them guesses correctly, they each win $50. There is no communication while the game is in progress, but they have five minutes to devise a strategy beforehand by which they can be guaranteed to walk away with $50 each.

For each level of play — 2 players or 4 players — how can the players ensure that someone in the group always guesses correctly?