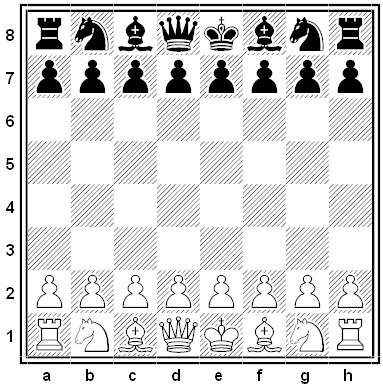 A chessboard was on the table with the pieces all set up for a game. So I asked Dr. Bates to play a game with the Major on these conditions: Whatever move Bates made throughout, with the white pieces, the Major must exactly imitate with the black, and Bates must give checkmate on the fourth move. As an experiment, Bates started off with 1. e4, and Rackford replied with 1. e5. Then Bates played 2. Qh5, and the Major had to reply with 2. Qh4. This gave me a good opportunity to explain that White cannot now play 3. QxQ, because it would be impossible for Black then to imitate the move. Neither could he play 3. Qxf7+, because Black cannot do the same thing, as he would have to get out of check. White must always make a move that Black can copy, until the checkmate is actually given on the fourth move.

“This puzzle caused great interest, and it was some time before somebody (I think it was Strangways) hit on a solution.”