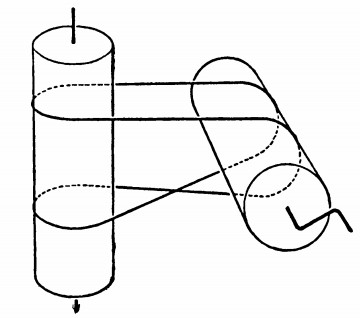 Two rollers are mounted on perpendicular axles in different planes. An endless thread passes round them and connects them, both directly and with a crossover, as shown in the diagram. The instrument is somewhat capricious, but the following phenomena can be demonstrated with it.

(b) One roller is rotated to and fro through a small angle. The other roller rotates continuously in the same direction.

“The apparatus shows that dynamical friction is less than statical, but a full explanation is complicated, if indeed it is possible, and certainly involves consideration of the elasticity of the connecting belt.”