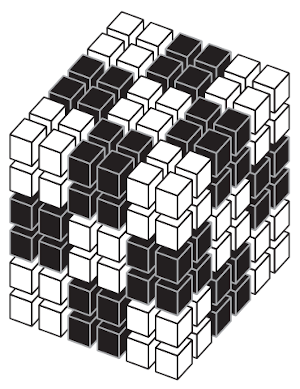 He mentioned this to his father, who happened to be mathematician Nicolaas Govert de Bruijn, and Nicolaas found that a “harmonic brick” (one in which the length of each side is a multiple of the next smaller side length) can be packed efficiently only into a box whose dimensions are multiples of the brick’s dimensions.

This can seen intuitively by imagining the 6 × 6 × 6 box filled with small colored cubes as shown here. No matter where it’s placed, each 1 × 2 × 4 brick must now displace an equal number of white and black cubes. But the box contains 112 white cubes and 104 black ones. So the task is impossible.