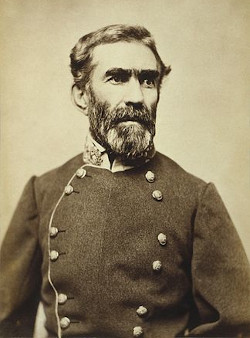 “[Braxton] Bragg was a remarkably intelligent and well-informed man, professionally and otherwise. He was also thoroughly upright. But he was possessed of an irascible temper, and was naturally disputatious. A man of the highest moral character and the most correct habits, yet in the old army he was in frequent trouble. As a subordinate he was always on the lookout to catch his commanding officer infringing his prerogatives; as a post commander he was equally vigilant to detect the slightest neglect, even of the most trivial order.

“I have heard in the old army an anecdote very characteristic of Bragg. On one occasion, when stationed at a post of several companies commanded by a field officer, he was himself commanding one of the companies and at the same time acting as post quartermaster and commissary. He was first lieutenant at the time, but his captain was detached on other duty. As commander of the company he made a requisition upon the quartermaster — himself — for something he wanted. As quartermaster he declined to fill the requisition, and endorsed on the back of it his reasons for so doing. As company commander he responded to this, urging that his requisition called for nothing but what he was entitled to, and that it was the duty of the quartermaster to fill it. As quartermaster he still persisted that he was right. In this condition of affairs Bragg referred the whole matter to the commanding officer of the post. The latter, when he saw the nature of the matter referred, exclaimed: ‘My God, Mr. Bragg, you have quarrelled with every officer in the army, and now you are quarrelling with yourself!'”