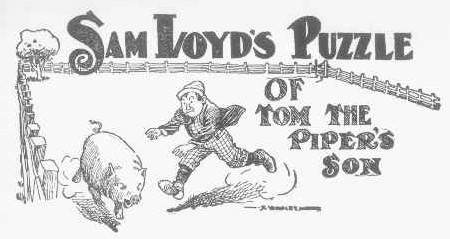 A problem from Sam Loyd’s Cyclopedia of Puzzles, 1914:

Here is the puzzle of Tom the Piper’s Son, who, as told by ‘Mother Goose,’ stole the pig and away he run. It is known that Tom entered the far gate shown at the top on the right hand. The pig was rooting at the base of the tree 250 yards distant, and Tom captured it by always running directly towards it, while the pig made a bee-line towards the lower corner as shown. Now, assuming that Tom ran one-third faster than the pig, how far did the pig run before he was caught?

Intriguingly, Loyd adds, “The puzzle is a remarkable one on account of its apparent simplicity and yet the ordinary manner of handling problems of this character is so complicated that solvers are asked merely to submit approximately correct answers, based upon judgment and common sense, just to see who can make the best guess. The simple rule for solving it, however, which will doubtless be quite new to our puzzlists, is based upon elementary arithmetic.” What’s the answer?