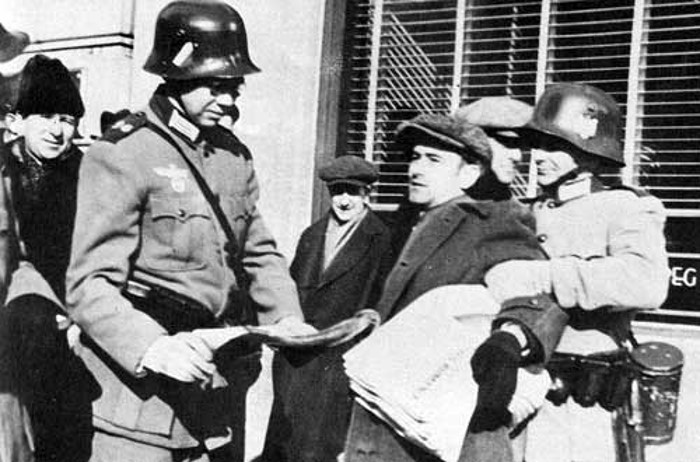 In 1942, Manitoba chose a startling way to promote the sale of war bonds — it staged a Nazi invasion of Winnipeg. For one gripping day, soldiers captured the city, arrested its leaders, and oppressed its citizens. In this week’s episode of the Futility Closet podcast we’ll describe If Day, which one observer called “the biggest and most important publicity stunt” in Winnipeg’s history.

We’ll also consider some forged wine and puzzle over some unnoticed car options.

In 1649 Claude Mellan carved a portrait of Jesus with a single line.

A pebble discovered in southern Africa may be the earliest evidence of an aesthetic sense among our ancestors.

Sources for our feature on If Day:

Tristin Hopper, “Rare Photos From ‘If Day’ — The Time Winnipeg Staged a Full-Scale Nazi Invasion of Itself,” National Post, Feb. 21, 2019.

David Williams, “Scottish Scientists Use Radioactive Isotopes From Old Nuclear Tests to Find Counterfeit Whisky. More Than 40 Percent of What They Tested Is Fake,” CNN, Jan. 24, 2020.

This week’s lateral thinking puzzle was contributed by listener Brian Voeller, who sent these corroborating links (warning — these spoil the puzzle).