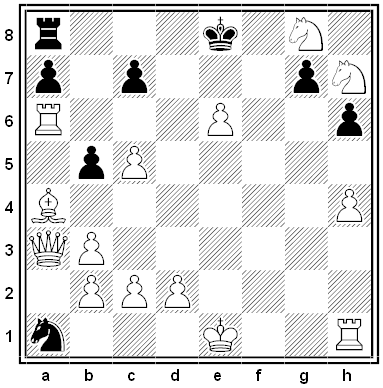 Luigi Ceriani published this curiously ambivalent retrograde puzzle in Europe Echecs in 1960. White is to mate in two moves.

The answer turns on whether White can castle kingside and whether Black can castle queenside. Castling is always deemed to be legal unless it can be proven otherwise. The question of White’s castling comes down to the origin of the rook on a6. If that started on h1, then White may not castle because the rook that’s currently on h1 obviously must have moved in order to get there. If the rook on a6 started on a1, then again White may not castle, because in that case the rook must have got to its present position via e1, since the pawn originally on a2 can have reached its present position on b3 only after the knight on a1 had itself moved there from b3.

Well, if castling by Black is impossible, then White can win by castling himself, since then Black has no escape from 2. Rf8#. And if castling by White is impossible, then White can capture the b5 pawn en passant (followed by mate with the queen), because if Black’s king and rook have not moved then Black’s last move must have been b7-b5. (His last move cannot have been b6-b5 because that would leave White no possible previous move. As it is, with Black’s last move being b7-b5, White’s preceding move must have been R[c6]xa6+.)

(Via John M. Rice, An ABC of Chess Problems, 1970.) (Maybe I’m being obtuse, but isn’t it possible that neither side can castle? In that case both proposed mates fall apart and I don’t see how White can succeed.)

02/03/2020 UPDATE: Ach, I’d just given the answer to my own question: Castling is deemed to be legal unless it can be proven otherwise, and it can’t be proven that neither side can castle. (Thanks, David and Daniel.)