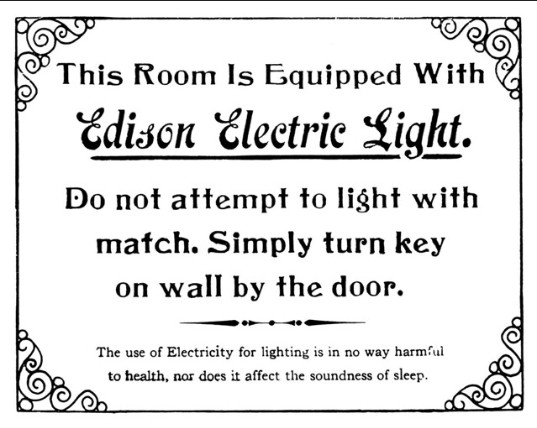 When electricity first became widely available, it was hailed as marvel, more valuable even than a human servant. In a 1914 manual on using electricity in the home, Maud Lancaster wrote:

[I]t is always at hand; always willing to do its allotted task and do it perfectly silently, swiftly and without mess; never wants a day off, never answers back, is never laid up, never asks for a rise; in fact it is often willing to work for less money; never gives notice and does not mind working overtime; it has no prejudices and is prepared to undertake any duties for which it is adapted; it costs nothing when it is not actually doing useful work.

First, though, people had to learn to use it. In 1884, electrical engineer Rookes Crompton wrote, “At the recent Crystal Palace Electrical Exhibition, a couple from the country asked the price of an incandescent lamp at one of the stalls, and being supplied with it for 5s., expended a box of matches in trying to light it, and then declared the whole thing was a swindle.”