A set of points has diameter 1 if no two points in the set are more than 1 unit apart. An example is an equilateral triangle whose side has length 1. What’s the smallest shape that can cover any such set? A circle of diameter 1 won’t cover our triangle; part of the triangle projects beyond the circle: 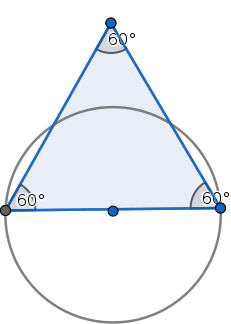 Of course a larger circle would work, but what’s the smallest shape will always do the job? Surprisingly, no one knows. When French mathematician Henri Lebesgue posed the problem to Gyula Pál in 1914, Pál suggested a modified hexagon (in black): 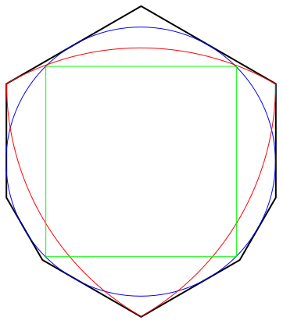 Here Pál’s shape manages to surround a circle (blue), a Reuleaux triangle (red), and a square (green), each of diameter 1, and in fact it will accommodate any such set. Its own area is 0.84529946. Will a smaller shape do the job? Well, yes, but the gains get increasingly fine: In 1936 Roland Sprague whittled Pál’s shape down to 0.844137708436, and in 1992 H.C. Hansen reduced it further to 0.844137708398. At this point observers Victor Klee and Stanley Wagon wrote, “[I]t does seem safe to guess that progress on [this problem], which has been painfully slow in the past, may be even more painfully slow in the future.” But in 2015 John Baez reached 0.8441153 with an exquisite adjustment to two regions in Hansen’s shape; the smaller of these would span only a few atoms if the shape were drawn on paper.

Is that the end of the story? No: Last October Philip Gibbs claimed a further reduction to 0.8440935944, and the search goes on. In 2005 Peter Brass and Mehrbod Sharifi showed that the universal cover must have an area of at least 0.832, so there’s room, at least in theory, for still further improvements.