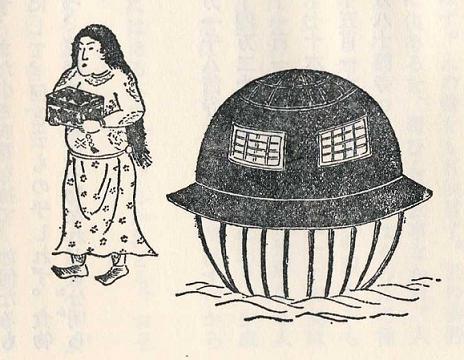 Three different Japanese texts of the early 19th century refer to a “hollow ship” that arrived on a local beach in 1803. A white-skinned young woman emerged, but fishermen found that she couldn’t communicate in Japanese, so they returned her to the vessel, which drifted back to sea.

This seems to be a folktale, though it’s an oddly specific one — the texts give specific dates (Feb. 22 or March 24) and give the dimensions of the craft (3.3 meters high, 5.4 meters wide), which was shaped like a rice pot or incense burner fitted with small windows. Reportedly the woman carried a small box that no one was allowed to touch.

But the place names mentioned appear to be fictitious; most likely the story is merely an expression of the insularity of the Edo period. One thing the ship wasn’t is a UFO — it never left the water, but simply floated away.