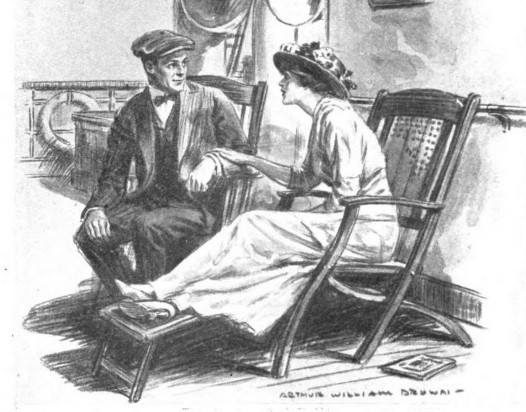 ‘Isn’t that young Griggs and Miss Deering?’ asked the captain, peering down from the bridge at a dark spot silhouetted against the moonlit sea.

‘It’s the speediest shipboard romance I’ve ever seen in all my thirty years aboard a liner,’ remarked the captain, smiling.

‘I understand they never saw or heard of each other until they met at dinner, Tuesday. Have you talked much with them, sir? I see they sit next you at table.’

‘Oh, yes, that’s true. Why, on the second dinner out he complained because there was no jewellery shop aboard. She looked as happy as a kid with a lollypop, and blushed.’

‘Whew! Engaged within forty-eight hours! Going some! I suppose they’ll be married by the American consul before they’ve been ashore an hour.’

‘Not a bit of doubt of it,’ grinned the captain. ‘True love at sight in this case, all right. Well, they have my blessings. I fell in love with my Missus the same way, but we waited three months. I’ll go below. What’s she making?’

Two hours later there came a terrific explosion away down in the hold amongst the cargo. The ship trembled and listed.

‘Women and children first! No danger! Time enough for all!’ shouted the officers, as the frantic passengers surged about the life-boats.

She was going down rapidly by her stern. There came another explosion, this from the boilers.

‘All women and children off?’ bellowed the captain.

‘Married men next!’ shouted the captain as the men began scrambling into the boats. A score of men paused, bowed, and stepped back. Young Griggs tore his way through and started to clamber into the boat.

‘Damn you, for a coward!’ cursed the second officer, dragging him back.

Young Griggs yanked away and again clutched at the boat. This time the second officer struck him square in the face and he went down.

The boatload of married men was merely cut away, so low was the ship in the water. Then came a lurch, and the waves closed over the great ship.

The next evening the Associated Press sent out, from its St. Louis office, this paragraph:

‘Among those lost was H.G. Griggs, junior partner of the Wells & Griggs Steel Co. He leaves a wife and infant son in this city. It is feared Mrs. Griggs will not recover from the shock.’