In 1905 Winchester Cathedral was in danger of collapsing as its eastern end sank into marshy ground. The surprising solution was to hire a diver, who worked underwater for five years to build a firmer foundation for the medieval structure. In this week’s episode of the Futility Closet podcast we’ll tell the story of William Walker and his curious contribution to saving a British landmark.

We’ll also contemplate a misplaced fire captain and puzzle over a shackled woman.

Anthony Trollope became a prolific author by simply demanding it of himself.

Wyoming’s North Two Ocean Creek drains into both the Atlantic and the Pacific.

Sources for our feature on William Walker:

John Crook and Yoshio Kusaba, “The Transepts of Winchester Cathedral: Archaeological Evidence, Problems of Design, and Sequence of Construction,” Journal of the Society of Architectural Historians 50:3 (September 1991), 293-310. 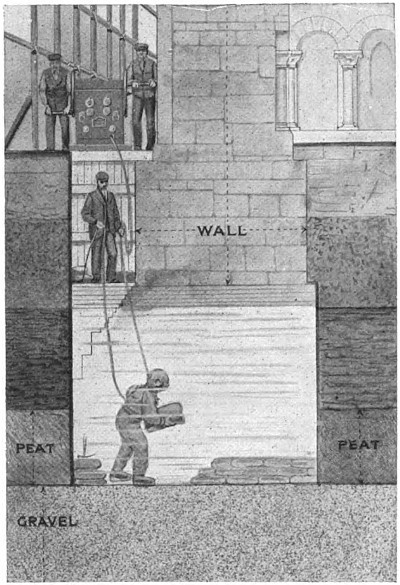 In this diagram, from Popular Science, 1912, two men operate a large pump at ground level. Below them, standing on a platform just above the water level, the diver’s assistant pulls in and pays out the diver’s air and signal lines as he moves about the trench. Walker, at the bottom, holds a bag of concrete that’s just been lowered to him. The trenches were generally longer and narrower than depicted here, and the water would have been impenetrably clouded with sediment.

“Police Want Anyone Who May Have Seen Toronto Firefighter on His Journey Across U.S. to Come Forward,” CBC News, Feb. 14, 2018.

“Toronto Firefighter Who Disappeared in New York and Wound Up in California, May Have Travelled Across U.S. Thanks to Friendly Truck Driver,” Toronto Star, Feb. 14, 2018.

Sofia Tancredi, “Anorexia Through the Ages: From Sainthood to Psychiatry,” E/I Balance, March 3, 2013.