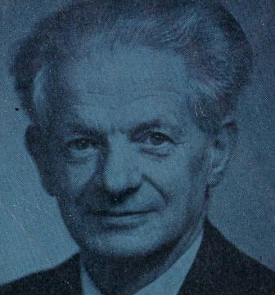 In the 1940s British psychologist Robert H. Thouless set out to test the existence of life after death by publishing an enciphered message and then communicating the key to some living person after his own death. He published the following in the Proceedings of the Society for Psychical Research:

He wrote that “it uses one of the well-known methods of encipherment with a key-word which I hope to be able to remember in the after life. I have not communicated and shall not communicate this key-word to any other person while I am still in this world, and I destroyed all papers used in enciphering as soon as I had finished.” He hoped that his message would be unsolvable without supernatural aid because the message was relatively short and the cipher wasn’t simple. To prevent an erroneous decipherment, he revealed that his passage was “an extract from one of Shakespeare’s plays.” And he left the solution in a sealed envelope with the Society for Psychical Research, to be opened if this finally proved necessary.

He needn’t have worried — an unidentified “cipher expert” took up the cipher as a challenge and solved it in two weeks, long before Thouless’ death. It was the last two lines of this quotation from Macbeth:

(It’s a Playfair cipher — a full solution is given in Craig Bauer’s excellent Unsolved!, 2017.)

Interestingly, Thouless published two other encrypted ciphers before his death in 1984, and only one has been solved. If you can communicate with the dead perhaps you can still solve it — it’s given on Klaus Schmeh’s blog.