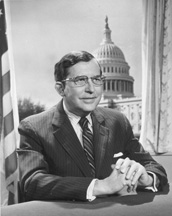 When Virginia senator William B. Spong Jr. first went to Washington, he worried that the media might mistakenly pronounce his name Sponge.

But he observed that his Senate colleagues included Russell B. Long (D-La.) and Hiram L. Fong (R-Hawaii).

So in introducing himself at the National Press Club, he announced that the three of them would be introducing a bill to protect the rights of songwriters in Hong Kong. It would be called the Long Fong Spong Hong Kong Song Bill.

They never introduced the bill, but the media never mispronounced Spong’s name.