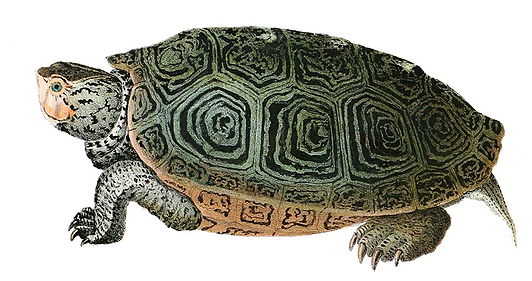 A small highland terrapin was captured in 1884 by a Chattanooga gentleman that carries on the smooth surface of its belly the inscription, carved in distinct characters: ‘Union: Co. K, 26th Regt., Ohio Vols.; November 18, 1864.’ It is supposed that some straggling Union soldier, belonging to the command designated, captured the North Georgia quadruped and proceeded to make a living historical tablet of the hard-shell little creeper.

That was twenty years ago. In 1886 when a party of ex-Union captives from Ohio, who were making a tour of the South, passed through Chattanooga, the terrapin was shown them and they could not have shown more delight over the meeting of an old friend. ‘He was the pet of some of our boys,’ said one of the old soldiers, as he fondly patted the terrapin’s back, while the tears filled his eyes and rolled down his cheeks in great drops.